Between April and July this year, Nicaragua suffered an extremely violent attempt at regime change supported by the US government and its allies. Crucial integral components of that coup attempt were bad faith reporting by international human rights organizations and extremely distorted news coverage by Western media. Partisan human rights organizations and media falsely blamed Nicaragua’s Sandinista government for almost all the deaths during the coup, when the reverse is true. Over two hundred Sandinista supporters, uninvolved passers-by and police were killed and hundreds suffered intimidation, abuse and torture at the hands of the US supported opposition forces. By default, organizations like the Inter American Commission for Human Rights and Amnesty International make clear they could hardly care less.

The clearest failure in their false reporting of the conflict is the sinister, ridiculous insistence that the Nicaraguan opposition engaged principally in peaceful protest, a claim beyond absurd given the number of Sandinista and police casualties. This deliberately deceitful coverage of events in Nicaragua reflects the broad contamination of Western societies by what economist Bill Black and others call “control fraud” whereby companies, especially powerful financial companies, use superficially legitimate accounts and auditing controls deliberately to mislead investors. Such companies report inflated assets and minimal costs giving a deliberately untrue and misleading view of their company’s financial position. These powerful companies crowd out honest business practice and manipulate political leaders so as to co-opt justice officials and escape criminal prosecution.

The US government’s failed regime change attempt in Nicaragua this year, like the US offensives against Venezuela or Iran, for example, reveal how this corrupt process reaches into Western institutions of all kinds. Western non-profits, news media and multilateral institutions operate as one enormous corrupt combination via an infinite disinformation feedback loop, denying their countries’ peoples a true and fair view of world events. They falsely inflate how good and morally superior they are, their assets, while deceitfully minimizing the costs, the countless victims and the incalculable suffering. So the populations invested in that vast fraudulent concern think the system’s purported controls, like the media and the non governmental sector, work just fine when, in fact, almost everything is corrupt.

In Nicaragua’s case, two events demonstrate this reality very clearly. Firstly, Western reports on Nicaragua either completely omitted or else glibly dismissed the murderous attack last May on a Sandinista media outlet, Nuevo Radio Ya. The attack resulted from a false sensationalist claim by Miguel Mora, of the opposition’s propaganda outlet 100% Noticias, that his TV station was under attack that day. Mora appealed for opposition activists to attack Nuevo Radio Ya, which they did, setting it on fire, holding over 20 radio staff under siege and then shooting at firefighters and police attempting to control the fire and rescue the people inside. Only the bravery of the rescue services and the radio station staff prevented more severe injury and loss of life. That story has never been told in Western media except by probably the only two genuinely independent US writers to visit Nicaragua during the failed coup, Max Blumenthal and Dan Kovalik. 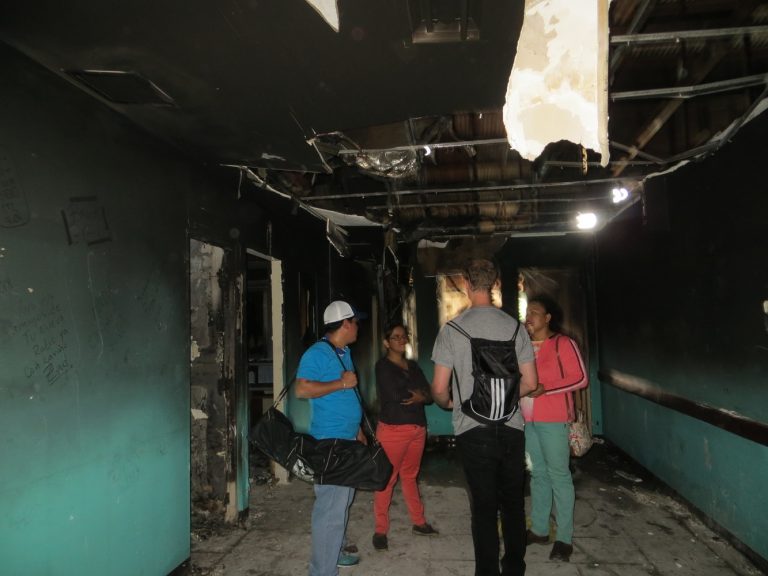 US writer Max Blumenthal talking to radio workers at the burnt out shell of a radio station attacked by opposition activists in May this year (Source: author)
Violent Coup Fails in Nicaragua, US Continues Regime Change Efforts

A second incident, among dozens of similar cases, also demonstrates the corruption of the Western human rights industry and their media accomplices. Last week, the Nicaraguan authorities made public the results of a painstaking investigation into one of the headline atrocities the IACHR and Amnesty International attributed to the government when it took place on June 16th. That day a family of six including two children burned to death in an arson attack on their house. Immediately, the virulent opposition human rights organization CENIDH had its activists on the scene falsely accusing the government of the crime. Within hours the IACHR were also attributing the heinous attack to the government. Now, after months of investigation, the police have identified four of the arsonists on the basis of accusations by survivors of the fire, witness identification and testimony, forensic analysis and incriminating material from opposition social media. Two of the accused have been sent for trial and two are fugitives.

Very early during the coup attempt, the Nicaraguan government invited the OAS to send an Interdisciplinary Group of Independent Experts to assist the Nicaraguan authorities in their investigations as part of the IACHR mission in Nicaragua. But the IACHR presented what it called a final report to the Permanent Council of the OAS before that expert group had even started work. Now, the expert group has presented a report covering events up to May 30th that, predictably, reproduces the self-same false information as the earlier peremptory IACHR report based on reports by opposition media and human rights organizations. Like the UN Office of the High Commissioner for Human Rights before it, the IACHR expert group broke the terms of its original agreement with the government by engaging in activities it had no authority to undertake.

The term of the expert group’s visit had already expired when, on December 19th, the government decided to suspend the IACHR bodies’ presence in Nicaragua, accusing them of supporting the country’s minority opposition and its efforts to overthrow Nicaragua’s constitutional government. Earlier, the Interior Ministry on December 14th confirmed the National Assembly’s measure canceling the legal status of nine non-profit organizations who made illegal use of their resources to participate in and actively support the coup attempt. Those NGOs represent 0.2% of around 4300 non-profits registered with the country’s Interior Ministry. In another move to dismantle the opposition networks involved in the failed coup attempt, the government applied the country’s long standing legislation against incitement to hatred and arrested Miguel Mora, head of 100% Noticias, based on dozens of accusations by Sandinista victims of opposition violence, citing Mora for his hateful instigation of attacks suffered by them and their relatives.

As in the case of measures by the Venezuelan authorities to protect their country’s society from similar crimes, Western media coverage of these recent events in Nicaragua misrepresents them as moves by a dictatorship. But for people in Nicaragua they represent legitimate measures to defend the rule of law, economic stability and citizen security. Western media and human rights organization persistently omit sadistic, murderous opposition violence and grotesquely misrepresent steps by the Venezuelan and Nicaraguan governments to protect people from it. By covering up the opposition’s crimes they make themselves accomplices to them, as the Nicaraguan government noted in relation to the IACHR, it “ constitutes a platform for the broadcasting of false information to promote international sanctions against our country as did the IACHR official Maria Claudia Pulido in her visit to the United States last September 27th, promoting from overseas the rupture of constitutional order and the attempted coup d’etat against Nicaragua’s legitimate government, thus violating the impartiality established in the OAS Charter.”

By refusing to acknowledge the reality of wholesale murderous opposition violence during the failed coup attempt, the IACHR and its NGO camp followers like Amnesty International have confirmed they are accessories to the US government’s regime change operation in Nicaragua. They have been willing accomplices to the killing, burning, rape, abuse and torture of hundreds of Sandinistas, which they have tried disgracefully to cover up.