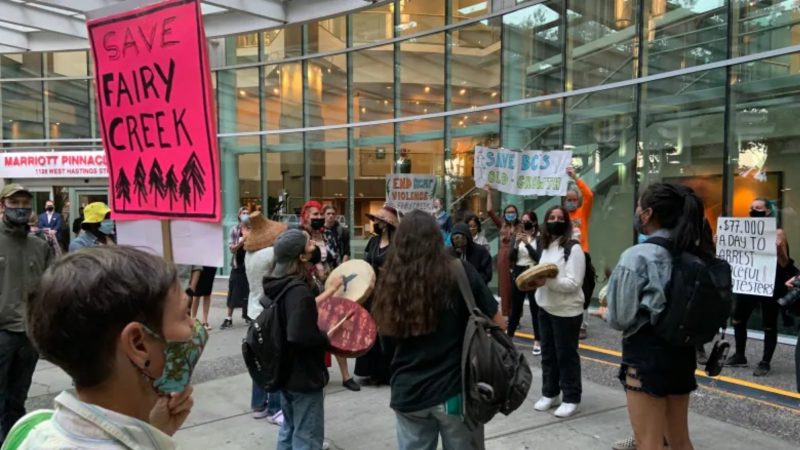 Above Photo: A group of protesters waited for Liberal Leader Justin Trudeau at his downtown Vancouver hotel on Tuesday. CBC News.

When Liberal Leader Justin Trudeau touched down in the Vancouver area on Tuesday as part of his election campaign, a group of protesters against old-growth logging in the Fairy Creek watershed were waiting to greet him at his downtown hotel.

A mix of Liberal supporters and protesters, numbering about 150 people in total, stood outside the Marriott Pinnacle Hotel where the leader was expected to spend the night.

The Liberal Party later told reporters that Trudeau had gone out for dinner rather than heading straight to the hotel as planned because of security concerns from the RCMP.

Protester xʷ is xʷ čaa said it was necessary to come to Vancouver to get the leader’s attention.

“We have to come here because Justin Trudeau is funding, through the federal government, the RCMP, who are now invading sovereign Indigenous territories.”

This week has seen numerous protests against alleged police aggression at anti-logging blockades in and around the Fairy Creek area on southern Vancouver Island near Port Renfrew.

More than a dozen protests on Monday were organized in response to video posted on social media over the weekend showing police using pepper spray on dozens of demonstrators. Protesters also say they have been assaulted and injured in earlier RCMP actions.

Police say they have arrested a total of 796 people since May, when they began enforcement of a court injunction against blockades preventing lumber company Teal Jones from accessing old-growth trees in the Fairy Creek watershed.

The federal election takes place on Sept. 20 and party leaders are travelling the country seeking votes.