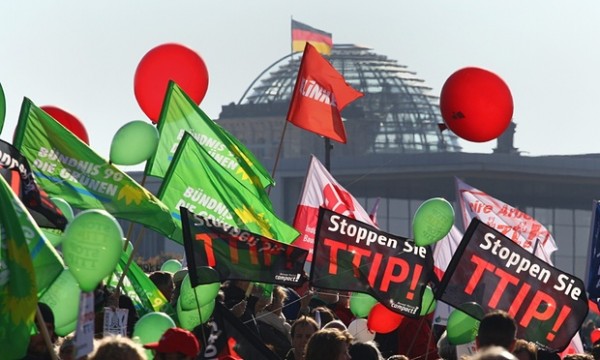 Above Photo: Potesters against the TTIP trade deal carry banners and balloons in Berlin on Saturday. Photograph: Wolfram Steinberg/EPA

Are we witnessing the beginning of the end of globalization?

May 28, 2016 “Information Clearing House” – “The Tyee” –  At the height of the battle over the Canada-US Free Trade Agreement in the 1980s, full page ads promised the deal would bring “more jobs, better jobs.”

The ads were expensive, but easily afforded by Canada’s 160 largest public corporations, who paid for them as the Business Council on National Issues.

The ad blitz was intended counter the effective campaign by opponents who warned Canadians that tens of thousands of manufacturing jobs would be lost.

Opponents won the battle for hearts and minds but lost the 1988 election on the issue, thus making Canada and the US “free trade” guinea pigs.

Hundreds of such deals have been signed since, in spite of the fact that the critics were right. Canada lost some 334,000 jobs between 1988 and 1994 as a direct result. Still, since 1988, the promoters of these investment protection agreements have held sway in large part because of massive support by corporate media.

Now, three decades later, citizens around the world are waking up and asking: just whom do governments govern for?

Battlegrounds in US and Europe

That question is being raised loudly in the E.U. and the U.S. In those two powerhouse economies, opposition to such deals could save us from more of them. On the line specifically are the Trans Pacific Partnership (TPP) and Canada’s proposed deal with the E.U., the Comprehensive Economic and Trade Agreement (CETA). If the U.S.-E.U. deal (the Transatlantic Trade and Investment Partnership – TTIP) fails CETA is unlikely to survive.

So-called trade deals empower transnational corporations by radically compromising the nation-state’s capacity for democratic governance. This emasculation of democracy is accomplished in large part through the investor-state provisions which allow corporations to directly sue government for profits lost due to environmental, health or other legislation.

Governments sign these agreements enthusiastically promising jobs and growth. But, while it has taken almost two generations, millions of American workers simply no longer believe the rhetoric.

Increasingly grim inequality has revealed the broken promise and American workers are pissed. That is in large part what drives the mind-boggling Trump phenomenon in the U.S. It’s not exactly class warfare but Trump supporters sense the system as a whole, political and economic, is truly broken.

And the support for Bernie Sanders is as close to class conflict as the U.S. ever gets.

For the first time in over 30 years, these corporate rights deals are a hot U.S. election issue with all three remaining candidates opposing the Trans Pacific Partnership (TPP).

Equally important, the state apparatus itself is showing cracks in its own consensus. This has taken the form of leaks from within the U.S. government about the TTIP and a government study of the benefits of the TPP to the U.S. Both present genuine threats to the future of these agreements in the U.S. And defeats in the US could be the death knell for these deals everywhere.

The leak regarding the TTIP came right on the heels of the typical reassuring noises from the Obama administration regarding protection for labour and the environment standards in the TTIP. According to an article titled “The Free-Trade Consensus Is Dead” in The New Republic magazine, “documents leaked by Greenpeace Netherlands revealed that U.S. negotiators working on a trade deal with the European Union have actually been pressuring their trading partners to lower those same standards.”

The leak was a revelation to the French trade minister who declared that the talks were “likely to stop altogether” as a result. (In 1998 France killed the Multilateral Agreement on Investment — the largest deal ever conceived.)

The second nail in the coffin of free trade consensus in the U.S. came from a U.S. International Trade Commission (ITC) analysis of the benefits the U.S. could expect from the even larger deal, the TPP. The report, released this past week, will be difficult for promoters to explain away:

“…the ITC estimates a worsening balance of trade for 16 out of 25 U.S. agriculture, manufacturing, and services sectors… Indeed, output in the manufacturing sector would be $11.2 billion lower with TPP than without it in 2032… the proposed 12-nation trade deal will increase the U.S. global trade deficit by $21.7 billion by 2032.”

Could these instances of clear resistance to the accepted wisdom “free trade” deals be the beginning of the end of corporate globalization?

I am not suggesting that the governments of developed countries are going to suddenly return to the good old days of the post-war social contract. But what has allowed them to proceed for three decades with political impunity has been the power of ideology to overwhelm evidence and reason.

Neo-liberalism has held sway for so long it has been almost impossible for ordinary citizens to imagine anything different. But now they can — not just because of political outliers Donald Trump and Bernie Sanders but because Hillary Clinton, a long-time, fervent backer of neoliberal trade deals, is now watering down such enthusiasm on the campaign trail and even switching her position to oppose the TPP.

Once members of the political elite begin to question the high priests of free trade the spell is broken and all sorts of alternative political narratives present themselves. It takes an accumulation of unlikely suspects breaking with the consensus before that happens and we have already seen some high-profile defectors from the TPP — including Nobel Laureate Joseph Stiglitz, economist Jeffrey Sachs and in Canada RIM co-founder Jim Balsillie. At first the Teflon seemed to hold but there is always a lag time when it comes to cultural change.

In Canada, regrettably, Balsillie’s warnings about trade deals stifling creativity and consigning Canada to “colonialism” that costs us billions of dollars aren’t likely to be echoed any time soon by most members of our corporate elite.

It is the nature of ideology that if the medicine doesn’t work, increase the dose. Unless more Canadians speak out on these investment protection agreements and get behind their counterparts in the United States and European Union, the Liberal government will keep prescribing the same medicine.

Murray Dobbin is an author, commentator and journalist. He is the author of five books and is a former columnist with Financial Post and Winnipeg Free Press. He is a board member of Canadians for Tax Fairness and on the advisory council of the Rideau Institute. He lives in Powell River, BC.