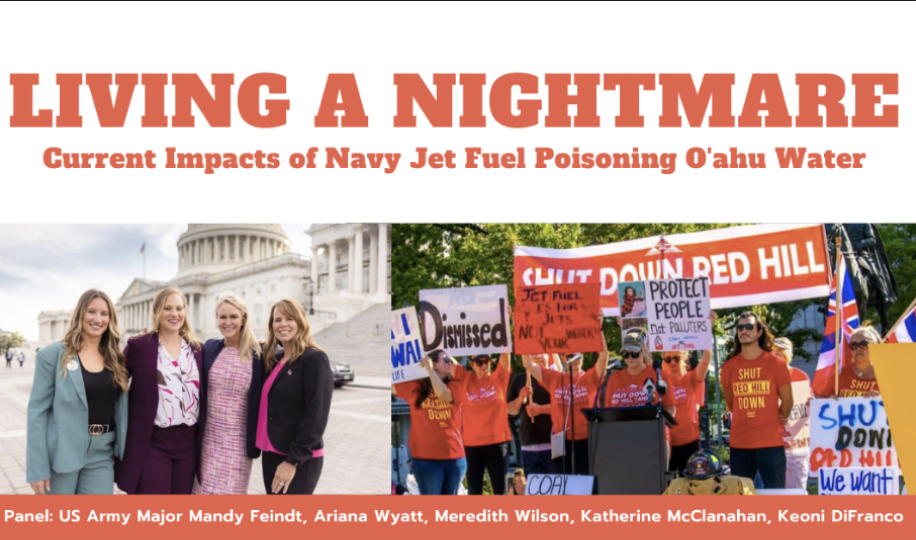 Alarm bells should have been ringing at the Navy and the Hawai’i Department of Health six months prior to the 19,000 gallon spew of jet fuel.

Many military and civilian families living on military bases around Pearl Harbor, Hawai’i have been outspoken that they felt ill before the November 2021 massive Red Hill jet fuel leak…and they were right!

Recently released data shows that their water was contaminated by jet fuel in the summer of 2021 and they were feeling effects of poisoning long before November 2021.

Many other articles in local and national media in the past year have also documented members of many military and civilian families seeking medical treatment for a variety of symptoms of jet fuel exposure, without knowing what the origin of the symptoms was.

Alarm bells that should have been ringing in the Hawaii Department of Health (DOH) from spiking levels of jet fuel in drinking water were silenced by a catastrophic 2017 DOH decision to increase by two and a half times the environmentally allowable level (EAL) of contamination in Honolulu’s drinking water.

Analysis of Hawaii’s Red Hill 80-year-old massive jet fuel underground storage tanks storage cumulative data table issues dated August 31, 2022, verifies the comments of many impacted military and civilian families that they had been feeling ill prior to the November 2021 “spew” for 35 hours of 19,000 gallons of jet fuel into the Red Hill drinking well portion of the Honolulu aquifer.

The question is who knew about the elevated levels of total petroleum hydrocarbons-diesel (TPH-d) which indicate fuel in the aquifer beginning in at least June 2021, six months before the November “spew” of jet fuel, and why weren’t the families who were living on affected military and civilian residential areas and who were drinking the contaminated water informed?

As the public was informed in the December 21, 2021 emergency order hearing, the Hawaii Department of Health revealed that from June to September, fuel had been detected in the Red Hill water shaft on multiple occasions, with two tests by the Navy in August, 2021 exceeding environmental action levels, but the Navy’s results were not relayed to the state for months.

TPH-d Levels 4 Times Allowable Limit in May 2021, Six Months Before the November 2021 Spew 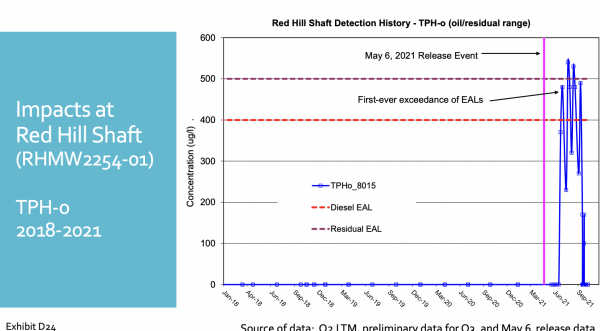 State of Hawai’i Department of Health documents reveal that the May 13, 2021, TPH-d level at the Red Hill Well 2  (RHWO2) was tested at 1600, which is 4 times the allowable level by even the increased ppb level.

The red color in the TPH-d column of the graphic above shows that persons drinking water from Red Hill Well 2, 20 residential communities, were being poisoned in May 2021, six months BEFORE the late November 2021 leak, and perhaps even before May 2021.

In order to determine when tests revealed that fuel was in the drinking water, the Navy and DOH must provide TPH-d data prior May 6, 2021.

The documents show that in the weeks prior to the massive late November 2021 leak, from November 3 – November 17, 2021, the TPH-d levels are 300+ TPH-d, BUT because the “new” 2017 DOH Environmental Action Level (EAL) was 400, these levels were NOT highlighted as “red” and dangerous, even though they were two times the acceptable level prior to 2017.

Of course, the questions are:

–Why did the Department of Health NOT tell the public about the May 2021 elevated TPH-d levels and perhaps earlier?

–Why is the 2021 data only being posted on September 5, 2022…almost a year after the big spew…and families complaining about feeling sick in early 2021??

–Why didn’t the Navy/DOD have a task force of military and civilian medical specialists in fuel poisoning immediately established at Tripler hospital?

–Why has the Tripler TRICARE medical program begun refusing to reimburse civilian doctors for tests done for Red Hill affected patients and is now refusing to provide referrals for patients with fuel poisoning symptoms?

No Trust In The Red Hill Task Force

To have some level of credibility and trust in the Red Hill Task Force that is overseeing the removal of the 104 million gallons of jet fuel still remaining in the mammoth jet fuel storage complex, we need some trusted voices from the public, citizens and impacted family members  on the military/EPA/State of Hawaii dominated Task Force.

The Navy, Department of Defense and to some extent, the State of Hawaii have a big hole to dig themselves out of and the public will be watching them closely in the next months and years.