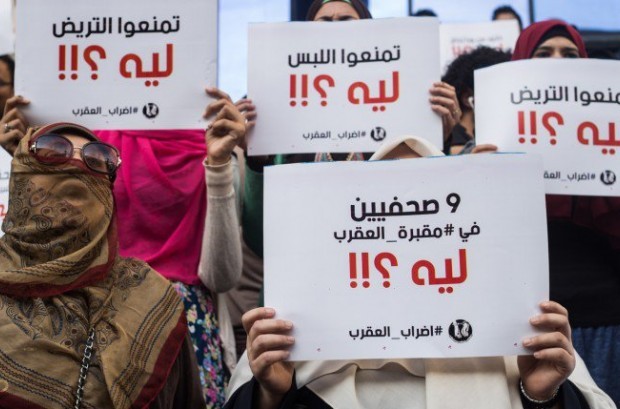 Families of imprisoned journalists began an open ended sit-in at the Press Syndicate headquarters on Sunday, according to an announcement on the Facebook page representing the coalition of families.

At least 42 journalists are currently in detention, according to the latest Press Syndicate figures, whereas the coalition estimates the number to be around 90 journalists.

The families chose Sunday in particular as the start date for the sit-in as it will coincide with a syndicate ceremony celebrating its 75th anniversary.

“We have been knocking on every door for nearly three years but nobody responds,” the families said in their statement. “We are coming back today, hoping that our demands will not be in vain.”

The families decried the deteriorating conditions experienced by  journalists inside prisons, which they described as a “slow death”. They said: “we hope this sit-in will be supportive to the syndicate’s endeavours in releasing the journalists.”

This sit-in comes shortly after an earlier protest held by the imprisoned journalists’ families at the syndicate headquarters in late February, where they said they have used all possible means of communication to shed light on the worsening health conditions of detained journalists, especially those held at Tora Prison, also known as Al-Aqrab.

The syndicate‘s Freedoms Committee has campaigned for improving conditions for journalists amid ongoing assaults against press freedom. Through many statements, reports, conferences, and rallies, the committee’s leaders, namely Khaled Al-Balshy, has decried the state’s intimidation tactics against journalists.

An arrest warrant was issued against Al-Balshy in early April, charging him with inciting for the toppling of the regime and disturbing the peace. The warrant sparked widespread criticism from journalists and the syndicate, which prompted the Ministry of Interior to withdraw its warrant against him.

Since the ouster of former Islamist president Mohamed Morsi in July 2013, journalists have continued to face difficulty in their profession, between forms of censorship and assault, particularly when covering protests.

A report issued by the Freedoms Committee in mid-February documented 782 cases of violations against journalists in 2015. Other examples of violations against journalists include censorship of articles and newspapers, halting the printing of some newspapers, security raids on media, and media gags imposed by the prosecutor general in unprecedented numbers in 2015.