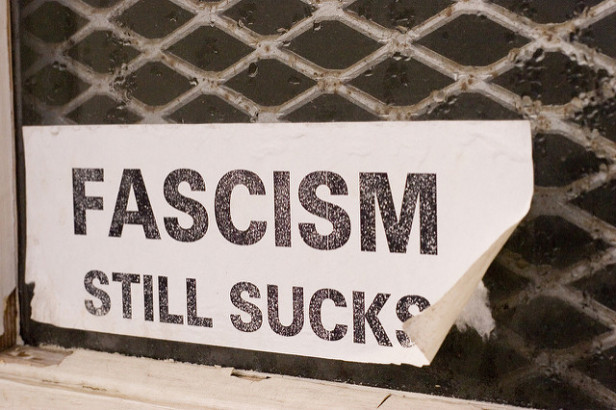 November 25, 2017 “Information Clearing House” – There’s a popular quote of unknown origin that usually goes something like “When fascism comes to America, it will be wrapped in a flag and carrying a cross.”

It’s a good quote, whoever said it. It warns that if manipulative oppressors are going to seize control of a nation’s government, they will obviously need to do so by appealing to the spirit of the times, the current values system of the masses. They’re not going to make their entrance screaming “Freedom is slavery!” while a band plays the Darth Vader theme. This is obvious to anyone who possesses any insight into how people think and behave.

But it’s a quote from a bygone age. Christianity and flag-waving patriotism still hold value in red states, but they’ve become largely invisible to the major culture factories of New York and Los Angeles, and thus to the dominant culture of the greater United States. If fascism came to America wrapped in a flag and carrying a cross today, it wouldn’t have enough broad public support to implement its agendas, because crosses and flags don’t hold that much sway over America’s dominant value system. In order to rope in those who don’t value the old cultural value symbols, something more is needed.

So when fascism came to America, it came wrapped in a rainbow flag, and wearing a pussyhat.

Do you know why Democrats fixate so much on the completely unsubstantiated narrative that Donald Trump colluded with the Russian government to steal the 2016 election? We know that the loose tangle of alliances between the intelligence communities, the military-industrial complex, defense agencies, corporate media and plutocrats collectively known as the deep state advance that narrative because it helps manufacture public support for new cold war escalations with China’s right arm Russia, but why do Democrats advance it? Why do they work so hard advancing a weird McCarthyite psyop when there are so many actual horrific things that this administration is doing?

So they collaborate with the deep state’s world-threatening scheme to take down Russia, because the idea of Russia has been successfully married to the idea of Trump. One of the ways that they have done this is to demand a drastic increase in online censorship to protect them from Russian propaganda and fake news, and a drastic increase in online censorship is exactly what they are receiving. Trump fear was used to manipulate rank-and-file Democrats into asking for this fascism, while cheering for the US intelligence community to keep fighting America’s enemies.

So while Trump leads his American flag-wrapped, cross-carrying supporters into consenting to more war, more domestic surveillance, more militarization of the police force, and more soul-crushing, world-killing neoliberal economic policy, the goons of the Democratic establishment are leading their rainbow flag-wrapped, pussyhat wearing base into consenting to the exact same thing. The noose gets ever tighter, the censorship gets more and more severe, the spectrum of acceptable debate gets smaller and smaller, the rule of the oligarchs grows ever more totalitarian, and neither the flag-wrapped cross carriers nor the rainbow flag-wrapped pussyhat wearers do anything about it. This was intended.

Have you ever noticed that Democrats will eagerly advance agendas which cause no inconvenience for America’s oligarchs, but when you ask about fixing the economic injustice those oligarchs thrive on or scaling back the war machine that props up their empire, Democrats are nowhere to be found? They claim to stand up for people of color, but suggest pulling some money away from the plutocrats and military-industrial complex to make slavery reparations and you’ll get laughed out of the room. They’ve got no problem advancing gay marriage or trans rights, but try getting Americans the social safety nets afforded to everyone else in every major country on earth and they babble about ponies and unicorns. They don’t care if you get an abortion, but don’t you dare try to stop them from bombing other civilizations into the stone age on the other side of the planet.

They put a smiley face on the tyrannical oligarchs. They put a pussyhat on Big Brother.

And people see through the bullshit. Not everyone, but a lot of people. It doesn’t take that much insight to be able to smell a lie when it’s being shoved down your throat. For that reason, very real social justice issues get entangled and confused with social engineering manipulations. I try to talk about the very real problem of rape culture, and I get readers shaking their heads in dismay telling me I’ve swallowed deep state propaganda. LGBT rights activism has been soiled with homophobic smears against Trump and Putin. Black activists try to address institutional racism and police brutality, and their activism gets smeared with association with Russian internet trolls. Addressing real problems gets harder and harder because establishment manipulators have us so psychologically fixated on fake things.

Americans would never consent to being dominated by forces they viewed as openly fascistic, so they are dominated by forces with pretty faces painted on them instead. Sure, Trump is doing his part in advancing the interests of the corporate slave state, not as the “Orange Hitler” we were promised he would be, but as a more overt version of his neoliberal, neoconservative, ecocidal omnicidal predecessors.

That said, the painted face of enlightened coastal liberalism has facilitated the agendas of the oppression machine far more. The drop in healthy suspicion of the US intelligence community, the demand for online censorship, the manufactured support for world-threatening cold war escalations — these things didn’t come from the red states. This willing complicity with Orwellian agendas was birthed into existence by those bastions of progressive values in America’s cultural hubs on either side of the continent. It is maintained by NPR-listening, latte-sipping liberals who view themselves as open-minded and woke.

By allowing socially liberal values to become the dominant culture, and then hijacking those values by clothing fascism in a rainbow flag and a pussyhat, the elites who are ruining our world were able to trick rank-and-file Democrats into cheering for their own enslavement. And now here we are, trying our damndest to yank that pussyhat off of Big Brother to show them all what’s really happening. We’ll find out if it’s working in due time.