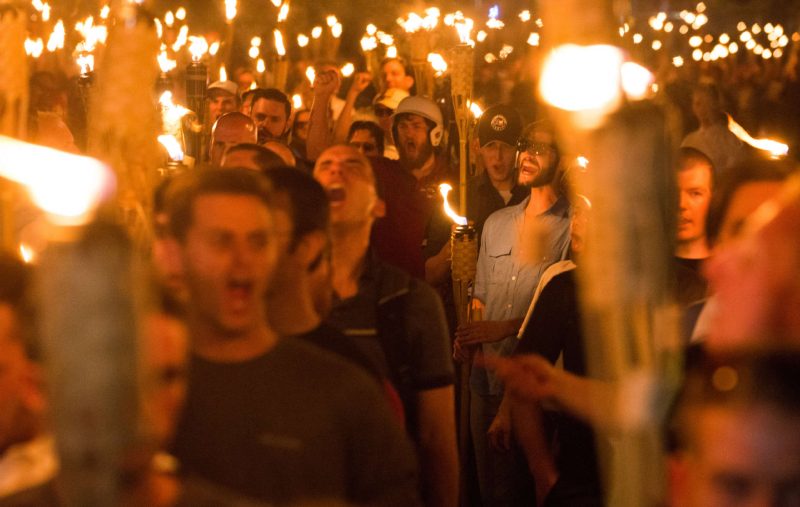 Above Photo: White supremacists march with tiki torchs through the University of Virginia campus on the night before the “Unite the Right” rally in Charlottesville, Virginia, on August 11, 2017. Zach D Roberts / NurPhoto Via Getty Images.

When Republicans blocked the John Lewis Voting Rights Advancement Act on January 19, 2022, they removed the last safety net preventing the U.S.’s plummet toward authoritarianism. As a result, we are at this moment in a state of free-fall, the culmination of a state-level Legislative And Enforcement Landscape that directly mirrors Jim Crow — or as fascism scholar Jason Stanley recently put it, “America is now in fascism’s legal phase.” Although we do have ways of fighting back, the situation is dire.

We often hear that the U.S.’s founding documents, courts and institutions make it immune to despotism, but this claim is simply false and erases our country’s troubling history with white supremacy — one the GOP is poised to reinvigorate. During Reconstruction, for example, Louisiana experienced dozens of coups and massacres at both the local and state levels. These escalated after white supremacists refused to concede defeat in the state election of 1872, opting instead to set up a shadow government under losing candidate John McEnery. The paramilitary arm of the shadow government — the White League — tried (and failed) to oust the legitimate governor and his allies in the “Battle of the Cabildo” in 1873. Instead of arresting and prosecuting the conspirators, state and federal officials allowed them to plan their next coup, which successfully toppled the state government in the “Battle of Liberty Place” in 1874.

Failing to prosecute the white vigilantes and the insurrectionists of Reconstruction, the U.S.’s first attempt at multiracial democracy, all but ensured their eventual success. This pattern played out across the South as the old enslaving class spread racist fears of nonexistent Black insurrections to successfully promote a frenzy of racist violence in a bid for power. Perhaps we might tell ourselves that white vigilantism is “unconstitutional” and would never survive the courts, but the unfortunate truth is that the Supreme Court has historically condoned these tactics. In the 1876 *Cruikshank* ruling, the justices decided that the white paramilitaries who murdered roughly 150 Black Louisianans in 1873 did not violate their civil rights because the Bill of Rights only applied to states, not to private individuals. White conservatives understood the ruling as granting them immunity from prosecution for murdering Black Americans and enacted a wave of racist violence months later in the election of 1876 that formally ended Reconstruction.

We sit at just such a juncture, where Donald Trump and members of his administration tried repeatedly to overturn the results of the 2020 election. We now know that Trump officials, lawyers and campaign staff explored a variety of strategies designed to overturn the election results, including a mid-December unsigned executive order directing the recently installed Secretary of Defense Christopher C. Miller to seize voting machines. Trump allies, meanwhile, met with Republican senators two days before the mob attack on the Capitol to discuss the now-notorious coup PowerPoint detailing how Republicans might install Trump on January 6 and then declare martial law. Mark Meadows, Trump’s chief of staff, texted at least one member of Congress, “I love it” regarding the planned coup. While it is true that some of Trump’s foot soldiers who staged the Capitol breach have faced repercussions, its architects continue to hold meaningful power and influence and are successfully removing the guardrails that staved off their last coup attempt.

Although prominent Democrats hope that it is possible to “out-organize voter suppression,” our history suggests otherwise. After the formal end of Reconstruction, white vigilantes used intimidation and violence to negate the 15th Amendment (which guaranteed Black men the right to vote), but overwhelming Black majorities in some districts enabled Black voters to elect Black state representatives like Robert Smalls in South Carolina.

White conservatives, who campaigned under explicitly racist slogans like “This is a White Man’s Country; Let White Men Rule,” could not stomach so brazen an affront to their fundamental commitment to white power. Beginning with Mississippi in 1890, Southern states with large Black populations rewrote their state constitutions to destroy the last vestiges of Black political power, using poll taxes, literacy tests and even a grandfather clause that allowed poor and illiterate whites to vote so long as their grandfather had been able to vote during slavery, when Black Americans could not.

Like today’s voter purges and restrictions pushed by the Republican Party, the Jim Crow constitutions of the 1890s used race-neutral language to target Black voters, ensuring that even if a handful were able to vote, they would never be able to wield power. As Robert Smalls protested at the South Carolina Constitutional Convention in 1895, “this convention has been called for no other purpose than the disfranchisement of the negro.” The new Jim Crow constitutions accomplished precisely that, cutting Black registration from 130,000 to 5,000 in Louisiana, 147,000 to 8,600 in Mississippi, and 147,000 to 21,000 in Virginia. In Williams v. Mississippi, the Supreme Court even declared these measures constitutional in 1898. Despite the clear targeting of Black voters, the ostensibly race-neutral language meant that, as with Cruikshank, the court refused to intervene to uphold the 15th Amendment so long as it meant protecting the rights of Black Americans.

Our political system is already skewed by deeply gerrymandered districts designed to maximize Republican power, and although a majority of Americans support an end to partisan redistricting, Republicans are further expanding gerrymandering in states like North Carolina, where Trump garnered 49 percent of the vote in 2020, but where the GOP is are now positioned to claim 70 percent of the House seats.

On top of this effort, Republican legislatures are making it harder to vote, passing laws restricting voting hours and methods in 19 states while creating new criminal penalties for handing out water in Georgia and for encouraging potential voters to request a mail-in ballot in Texas. To make matters worse, Republican-controlled states including Florida, Georgia, Texas and Arizona passed laws handing control of elections from nonpartisan boards to partisan officials. A slate of new far right Republican candidates for secretary of state who control election returns and certification in key battleground states of Arizona, Georgia, Wisconsin, Michigan and Nevada, meanwhile, refuse to concede that Joe Biden won the 2020 election. If we fail to act to protect voting rights and overturn these laws, Democrats will likely face a substantially more repressive landscape in 2022 and 2024.

While Republican election rigging and insurrectionary efforts create a dire situation, it is one we might be able to navigate with robust First Amendment protections. The mass protests of the civil rights movement, for example, inspired the Johnson administration to pass a series of reforms including the Voting Rights Act.

That’s not to say this kind of mass mobilization would be easy or without risks, but a movement similar to the “militant nonviolence” of the civil rights era could overcome the racist authoritarianism of the GOP. Almost in anticipation of this possibility, Republicans passed a slate of state laws making it easier for police to arrest protesters and for vigilantes to run them over with their cars. They did so at the very moment that they made it easier to overturn elections but harder to vote. Under those circumstances in GOP-controlled swing states, protesting a subverted or overturned election means taking enormous bodily and legal risks, severely constraining the right to assemble when it would be most needed.

The same might be said for the Republican attack on education, again waged at the very moment the GOP expanded voter suppression and anti-protest laws. Republican-controlled legislatures passed or are in the process of passing laws that make it illegal to teach the U.S.’s racist history or its impact on systems of power. Officials and administrators in GOP-controlled states have banned professors from testifying in court to overturn voting rights restrictions in Florida, banned books dealing with racism from public libraries in Texas, and promoted a nationwide campaign of threats and intimidation against school board members.

Fortunately, our history also shows that there are things we can do.

We can wage an organized campaign to demand bills creating a free, fair and transparent democracy. We already have exactly that legislation sitting in the Senate, blocked by a Republican filibuster that is itself a relic of Jim Crow. We can, today, exert overwhelming pressure on legislators to pass bills protecting our right to vote and guaranteeing a truly representative democracy with robust First Amendment protections. We can also demand the Department of Justice (DOJ) take every available opportunity to investigate and hold accountable the organizers of the January 6 mob attack on the Capitol. Although we have often failed on this front, the 1871 Ku Klux Klan Act and the creation of the Civil Rights Division of the DOJ in 1957 raised the costs of white vigilantism and show that a genuine commitment to justice can turn the tide of white supremacist organizing and violence. Historically, failing to take aggressive action against white vigilantism all but guarantees escalating white vigilantism and the creation of some form of apartheid regime.

While we work to improve our existing institutions and hold them accountable, we can also embrace a culture of mutual aid and public good against which white conservatives cannot prevail. From Fannie Lou Hamer and Martin Luther King Jr. to Angela Davis and Keeanga-Yamahtta Taylor, we have generations of equal rights and abolitionist activists whose wisdom we can employ. They remind us that elite white minoritarian rule is genuinely unpopular and that working together to care for one another not only improves our lives but forces the state to be more responsive to the needs of its people. Our history demonstrates that together, we can defeat this white backlash, protect our democracy and build powerful new coalitions that bring together organized labor and racial justice movements. We must. Our future depends on it.