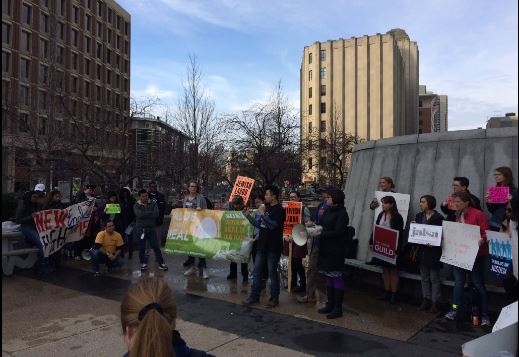 NATIONWIDE – In the run up to the Senate confirmation hearing of fast-food CEO Andy Puzder as U.S. Secretary of Labor, cashiers and cooks will lead protests Thursday at his Carl’s Jr. and Hardee’s restaurants and corporate offices and at U.S. Department of Labor branches in more than two-dozen cities from coast to coast.

Carl’s Jr. and Hardee’s cooks and cashiers will lead marches and rallies, holding signs that read, “Meet Andy Puzder: CEO of the rigged economy” and “Puzder gets rich while keeping workers poor.”

“Andy Puzder represents the worst of the rigged economy Donald Trump pledged to take on as president,” said Terrance Dixon, a worker at Hardee’s from St. Louis, who is paid just $9.00/hr. “If Puzder is confirmed as labor secretary, it will mean the Trump years will be about low pay, wage theft, sexual harassment and racial discrimination instead of making lives better for working Americans like me.”

According to CKE’s latest financial disclosures, Puzder has made between $4.4 million and $10 million in recent years, which means he makes more in one day than he pays his minimum wage workers in any given year. Despite this, he has been an outspoken opponent of minimum wage hikes that would allow his workers to meet their basic needs. Researchers at the University of California at Berkeley found in 2013 that fast-food CEOs like Puzder cost taxpayers  $7.3 billion per year in public assistance by holding down pay for their employees.

Puzder has also opposed basic protections and workers’ rights, like meal and rest breaks for employees working long hours. He has even said he would like to  replace Carl’s Jr. workers with machines because they “never take a vacation, they never show up late, there’s never a slip-and-fall, or an age, sex, or race discrimination case.” Puzder has also supported repealing the Affordable Care Act and cuts to Medicaid, even while he forces his own workers to rely on these programs by denying them health care.

As labor secretary, Puzder would be charged with upholding many of the labor laws and regulations CKE routinely violated during his time as CEO. In 60 percent of Department of Labor investigations since 2009, CKE restaurants and franchises were found to have violated wage and hour laws. Since Puzder became CEO of CKE in 2000, the Occupational Safety and Health Administration (OSHA), which falls under the DOL,  has found  98 safety violations at Carl’s Jr. and Hardee’s locations, with 36 of them capable of causing death or grave physical harm.

“I’m no robot, and make no mistake: I do need a bathroom break and I will sue if I’m sexually harassed on the job,” said Jessenia Adame, a Carl’s Jr. worker from Austin who is paid $9.50/hr. “If our elected leaders really want to make America great, they should confirm a labor secretary who looks out for working people like us, not someone like Andy Puzder who has made millions by stealing our wages and who wants to replace American workers with machines.”

Puzder’s confirmation battle follows an election defined by workers’ frustration with a rigged economy that benefits the few at the top, and after a banner year in the fight for $15/hr and union rights. Nineteen states raised pay for 4.3 million working people at the end of 2016, including in four states where voters approved minimum wage ballot initiatives on Election Day 2016. In the four states, “yes” votes exceeded the vote totals for either of the major parties’ presidential candidates – striking proof of the broad public support for raising wages across party lines and in different regions of the country. The  New Yorker recently hailed its successes as one of the five biggest business stories of 2016.

Since fast-food workers launched the Fight for $15 over four years ago, the movement has won wage hikes for 22 million underpaid workers, including more than 10 million who are on their way to $15/hour, by convincing everyone from voters to politicians to corporations to raise pay. The movement,  which has resulted in $62 billion raises for America’s workers,  was credited as one of the reasons median income jumped last year by the highest percentage since the 1960s.

“I know first-hand that Puzder would be the wrong choice for America’s workers,” said Rogelio Hernandez, a worker at Carl’s Jr. in Santa Monica, CA who makes $10.50/hr.  “But whether he’s confirmed, denied, or withdrawn, nomination is confirmed, denied or withdrawn: we won’t back down for one minute in our demands for $15 an hour and union rights for all workers. If Trump is going to be president for the fast-food corporations instead of the fast-food workers, he’s going to end up on the losing side of history.”