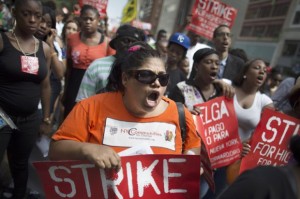 Above: Demonstrators in support of fast food workers march towards a McDonald’s, Monday, July 29, 2013, in New York.(Credit: John Minchillo).

Top union officials tell Salon the largest mobilization of fast food workers in U.S. history is about to get huge

Fast food strikers will escalate their campaign within the next week and a half, according to the key union backing their recent walkouts.

In a Monday interview in her Washington, D.C., office, Service Employees International Union president Mary Kay Henry told Salon that SEIU members “see the fast food workers as standing up for all of us. Because the conditions are exactly the same.” Henry was joined by SEIU assistant to the president for organizing Scott Courtney, who said to expect “a big escalation” from fast food workers in “the next week or 10 days.” Two weeks after one-day strikes by thousands of employees in the growing, non-union, low-wage industry, Courtney said, “I think they’re thinking much bigger, and while the iron’s hot they ought to strike. No pun intended.”

As Salon has reported, SEIU has been the key player behind the past year’s wave of fast food strikes, which began with a surprise walkout in New York City last November, spread this year to cities in the Midwest and West Coast, and escalated last month with strikes in seven cities over four days — by far the largest mobilization of fast food workers in the history of the United States.

In each city, workers are demanding a raise to $15 an hour and the chance to unionize without intimidation. With fast food jobs becoming increasingly prevalent in — and representative of — the U.S. economy, and embattled unions exploring and experimenting with tactics like those the fast food workers have taken up, their showdown has far-reaching consequences. SEIU, one of the largest U.S. unions, has devoted millions of dollars and dozens of staff to the campaign, which is also supported by a range of local and national progressive groups. In contrast to some past union efforts, said Henry, “It’s more about, ‘How do we shift things in the entire low-wage economy?’”

According to a labor source, organizing toward fast food strikes is also afoot in multiple cities in the South. (Sources were granted anonymity to discuss confidential discussions.) Asked about that prospect, Henry noted that an SEIU staffer organizing public employees in Gainesville, Fla., had received an unexpected call during the recent strikes from a Burger King worker wondering how to get involved. Henry said the SEIU office there is now hosting fast food worker meetings. “So yeah,” she told Salon, “I think we should expect that there will be more activity like that. We don’t yet understand the scale of it.”

A source who took part in a private SEIU meeting with allies last week in Las Vegas said that the union presented two tracks under serious consideration for transforming the industry. First, escalating pressure on fast food corporations – McDonald’s, Burger King and Wendy’s, in particular – with the goal of reaching a joint agreement under which the corporations would cover the costs of improved labor standards in their stores. And second, a legislative push for local living wage laws requiring improved compensation for fast food workers. Because most cities lack the legal authority to mandate higher wages for jobs that aren’t publicly subsidized, that push would involve statewide ballot measures in 2014 to allow cities to hike private sector workers’ wages.

Asked about that account, Courtney – a key strategist in the campaign — characterized the Las Vegas discussions as preliminary and hypothetical. He told Salon that there’s “a whole package of things” that could press the industry to change. Given that “people understand that these are the jobs of the future,” said Courtney, and that McDonald’s reaps billions in profits while workers remain in poverty, “The story is leverage in and of itself.” And “the fact that workers are taking these risks I think is our leverage.”

Where does that leverage lead? Could the endgame be a deal where corporations agree to pave the way for union negotiations and the union agrees before formal bargaining to carve out some parts of the country or cap the potential increase in labor costs? “It could be something like that,” said Courtney. “I think anything you know about traditional collective bargaining is possible,” said Henry, “and then things we haven’t imagined.” She added that innovations may be necessary to address the franchisee structure of the industry, in which fast food corporations set the business model – and reap substantial portions of the revenue — but don’t directly employ many of the workers. Could that franchisee structure itself be vulnerable to political or legal challenge? “Yeah, I think there’s a lot of areas,” said Courtney. “But again, it’s brand-new” and “certainly not fleshed out.”

In a statement emailed Monday, Burger King said, “As a corporation, we respect the rights of workers; however, Burger King Corp. does not make hiring, firing or other employment-related decisions for our franchisees.”

Henry told Salon she’d been “incredibly inspired” by the strikers, and “amazed at the degree to which it spread.”

“It’s really a privilege for us to support them,” she added. If those workers do win recognition as members of a union, will that union be SEIU? Henry said the question had been discussed within her union, but SEIU had so far decided to “kick that question down the road and figure out how to win, and support winning.”

Henry framed SEIU members’ support for their non-union fast food counterparts as part of their commitment to attack “this gross inequality that was ruining the economy and dismantling our democracy.” She argued that SEIU’s existing mission to maintain or improve labor standards among janitorial, security, healthcare and public sector workers couldn’t succeed “unless we figure out some sort of spark – which we think these workers could be – that says, hey, this has got to stop.” Conversely, said Henry, “If we could get enough workers standing up and forcing corporations to recognize their bargaining power, we could force wages up for everybody again.” Noting the pace at which the post-crash economy is adding fast food jobs, Henry asked, “How can we raise wages again if we’re not dealing [with] where the growth is?”

SEIU has explored fast food organizing before. A December 2009 internal memo presented to the union’s executive board sketched out aggressive new campaigns SEIU could mount in non-union industries if Congress eased organizing obstacles by passing the Employee Free Choice Act (that bill instead died a slow and painful death, contributing to organized labor’s current sense of crisis). The 2009 memo conceived of a campaign there that would “bring workers together across companies within geographic clusters to build a sense of movement and solidarity”; “use a living wage [ordinance] as a vehicle to excite, build momentum, build worker lists/ ID potential leaders and potentially support collective bargaining”; and win union recognition for 15,000 workers in Los Angeles county within six months. Asked about that never-mounted plan, Courtney called the current campaign “completely different”: “They weren’t going to strike. There wasn’t a national campaign.” And “this came at us, workers started this, and we’re trying to help them.”

Actual collective bargaining in fast food still strikes some seasoned pro-labor observers as an impossible goal. Interviewed on the eve of last month’s strikes, City University of New York’s Ruth Milkman called the effort “one of the most inspiring campaigns in a long time,” and said that with sufficient support it could force significant improvements in the industry’s standards, but told Salon it “by itself can’t change the enormous obstacles to winning union recognition today in any private sector workplace.”

Asked about predictions that the realistic best-case scenario for fast food workers would fall short of full unionization, Henry compared the skepticism to that which faced past SEIU campaigns organizing janitors or homecare workers, and said, “I kind of welcome that ridicule, Josh, because for me it signals that I’m probably onto a breakthrough.” She added, “I get a little pissed when labor academics say that, because we need to be rooted in our history. We stand on the shoulders of workers who’ve made the impossible possible time and again.”

The fast food campaign is one of a few high-profile efforts backed by SEIU to employ short-term, non-union strikes. “It’s not a decision to use strikes in every situation that we face right now,” Henry told Salon. “It’s, ‘How are we taking the most responsible risk given the odds that we’re up against?’” But she said the fast food strikes had “electrified” workers elsewhere. Henry offered the example of a recent funeral she’d attended for a member of the Teamsters union in California. “For the sort of hard-bitten union member who at this moment feels like a strike is suicide,” she said, there was “a lot of conversation” there about how the fast food strikers “are reviving hope.” “It made perfect sense to them that things are so bad,” she added, “government’s not answering, business is not responding – we have to take matters into our own hands and try to change things for themselves.”