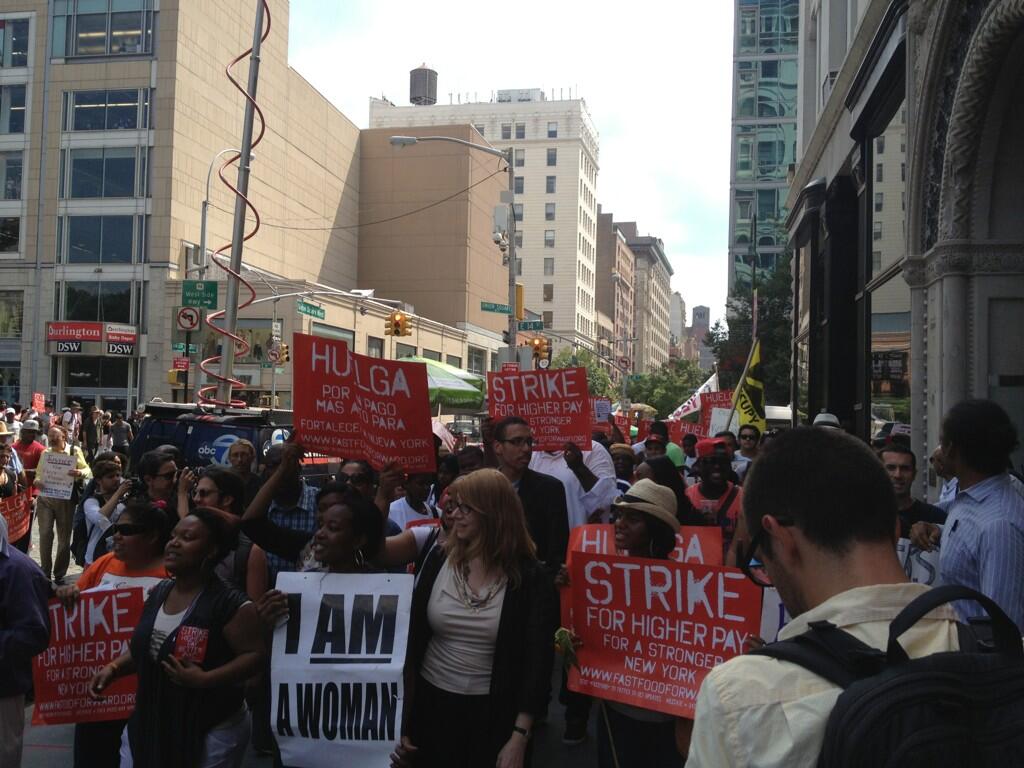 Fast Food Workers Are Fighting For The Majority Of U.S. Employees

Walkouts and protests by fast food workers demanding higher wages and collective bargaining rights began last November and spread to 60 cities nationwide at the end of August.  It is an inspiring grass-roots movement led by some of the nation’s most underpaid employees and should be supported by everyone who has a sense of fairness.

First let’s dispense with some of the nonsense that people have been told about these workers: They are not mostly teenagers.  As my colleagues John Schmitt and Janelle Jones have shown, the majority are at least 23 and only 30 percent are teenagers. More than a quarter of them are raising at least one child.  How are they supposed to survive on about $9 an hour (their average wage), with many making the federal minimum of just $7.25? They are not just there temporarily before advancing to higher-paying jobs with benefits: Our deformed economy is not producing enough decent jobs to which they could move.  In fact, nearly half of employed college graduates say that their jobs do not require a college degree.

Fast-food workers are suffering for the same reasons that the majority of employees have lost ground for decades: The rules of the economy have been rewritten against them.  It is not primarily “technological change” or “skills mismatches” that have caused the richest 1 percent of Americans to more than double their share of total income from 10 percent in 1980 to 22.4 percent in 2012.   It is because the link between productivity growth (increasing output per employee) and wage growth has been broken.  If even the federal minimum wage had increased with productivity and inflation since 1968 – as it had done in prior decades — it would be $17 per hour today instead of a meager $7.25.

The broken link between productivity and wages is due to the fact that most workers have lost bargaining power.  And that is a result of deliberate “reforms,” including the weakening of labor unions through changes in (and non-enforcement of) labor law;  international “trade” agreements that put most workers but not higher-paid professionals into more serious competition with lower-wage labor abroad;  and other policy changes that redistribute income upward.

The result of these structural changes is an economy that has depended increasingly on consumer indebtedness and bubble-driven growth (especially the huge stock market bubble of the late 90s and the real estate bubble that followed after 2002).  The collapse of the real estate bubble, which caused the Great Recession and the weak recovery since mid-2009, has further undermined workers’ bargaining power.

The organization and collective action of fast-food workers, like that of the “Occupy Wall Street” movement, is another indication that the right-wing (neoliberal) economic experiment of nearly 40 years has run its course.  This kind of mass organizing around domestic economic issues has not been seen for a long time, perhaps since the Great Depression.

President Obama supports a higher minimum wage but unfortunately didn’t deliver on his campaign promise to push for the Employee Free Choice Act, which would go a long way to restoring workers’ rights to form unions and bargain collectively.

Obama and his allies were just defeated in their efforts to drag the country into another military conflict, because Americans showed the Congress that they were sick and tired of senseless wars, and those who voted for another one would be held accountable.  Maybe we should make these politicians understand that we are also sick and tired of an economy that delivers the goods to fewer and richer people each year and leaves tens of millions of people struggling to get by. Then we might begin to reverse some of the wrongs here at home too.