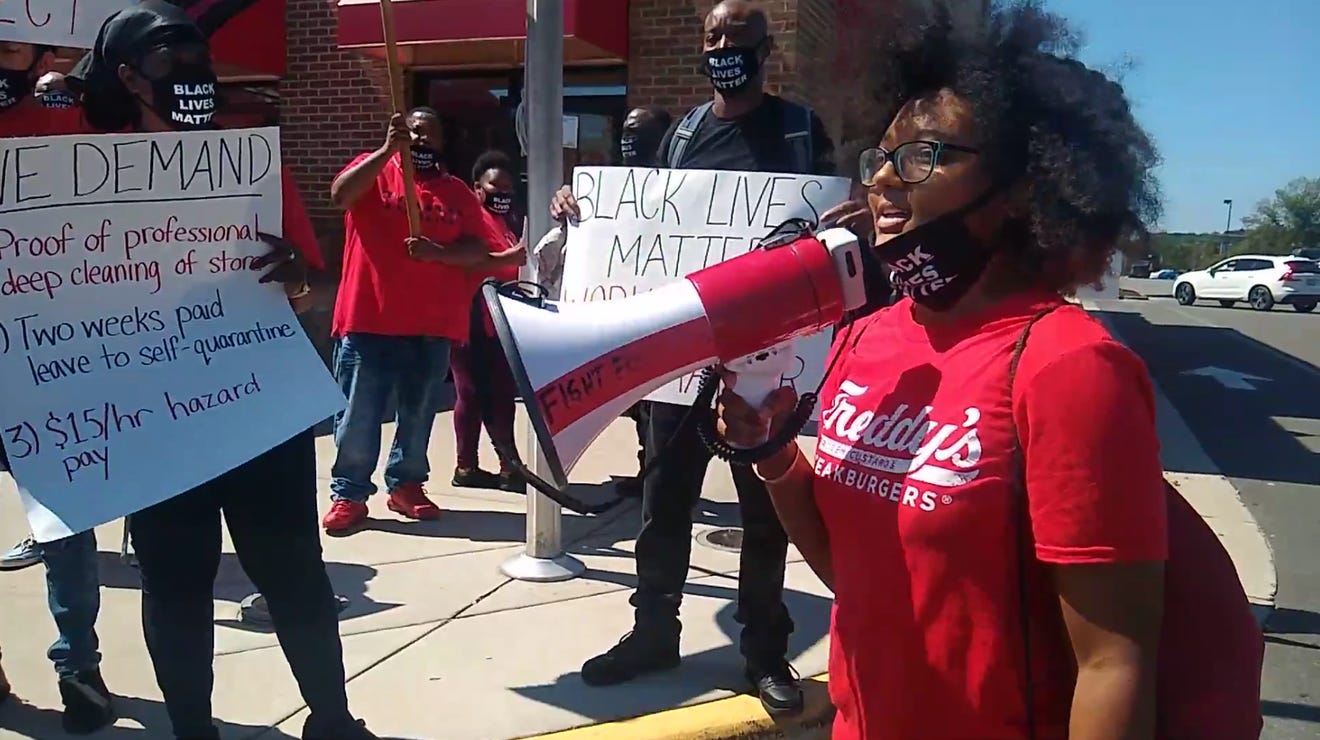 Above photo: Jamila Allen (right) in Durham, NC in September, 2020. NC Raise Up.

Essential and frontline workers across the nation may face a choice: Quit, or work in conditions that put them at risk of contracting COVID-19.

Durham, NC – In early September, Jamila Allen led a group of 18 co-workers out the front doors of Freddy’s Frozen Custard & Steakburgers to protest the lack of safety measures taken by management in dealing with COVID-19. A coworker had tested positive for COVID-19, but the restaurant had refused to pay workers for time to quarantine. The strikers demanded a professional deep cleaning of the store, two weeks paid leave to self-quarantine, and $15 per hour hazard pay.

Outside the eatery in West Durham, workers at the national fast-food chain were joined by dozens of supporters from the Fight for $15, the Poor People’s Campaign, and other local groups, who joined in chants of “I believe that we will win” and “Put some respect on my check.”

For Allen, 23, that was her first time leading a protest. She’s lived in Durham her whole life, and worked in the retail and service industries for several years. She said she was emboldened by the injustice she and her coworkers have faced as frontline workers.

“At first, I was nervous because I’ve never walked out on the job before but it was very powerful to have everyone behind me acting like a union,” said Allen, who has been a member of the local Fight for $15 group, NC Raise Up, for more than a year. The state minimum hourly wage is $7.25.

Walking out made a difference

Like Allen, millions of essential and frontline workers across the nation may face a choice: Quit, or work in conditions that put them and their loved ones at risk of contracting COVID-19. The stark choice was underscored when the head of the state agency responsible for protecting North Carolina workers’ health and safety said that COVID-19 wasn’t a workplace threat that requires new safety rules on employers.

Freddy’s management refused to meet any of the strike demands until another employee tested positive in October. After Allen and her coworkers striked again, with the same demands, and garnered press coverage, management responded: They granted workers who test positive for COVID 10 days of paid sick leave, and all other workers one day of paid leave to get tested for COVID-19. The new policy applies to workers at 33 Freddy’s locations across the country.

“In recognition of the financial impact the COVID-19 pandemic has had on Team Members and their families, the franchisee has revisited their restaurant policies,” said Jill Tinsley, a spokesperson for Freddy’s in an email.

“Freddy’s saw we weren’t backing down about getting paid for the time we had to quarantine. They realized they had to give us something,” Allen said. “It’s not what we asked for but it’s a start.”

“We still deserve to be paid for the quarantines we did after each COVID outbreak in our store,” she said. “We had to stay home to protect ourselves and our families.”

Nationwide, frontline food workers like Allen are stepping forward to demand their employers do more to safeguard employees during a massive public health crisis. In April, hundreds of workers at more than 30 fast-food restaurants in Los Angeles and the Bay Area planned a walk out to demand that major chains do more to protect workers from the pandemic. In May, McDonald’s workers in 20 cities went on strike.

In July, after a Santa Monica Burger King worker died after showing symptoms of coronavirus, fast-food workers at McDonalds and Burger Kings across the country walked off their jobs to demand better workplace protections.

More recently, Business Insider asked fast-food workers to share their stories of being on the job during a pandemic. In response, more than 100 workers wrote to express their fears and worries about putting themselves and their families at risk of contracting the dangerous virus.

“I’m already poor. I live paycheck to paycheck, but I would much rather be out of work to help prevent the spread to my children or anyone else,” one anonymous McDonald’s worker told the outlet.

In North Carolina, more than 120 groups representing food workers up and down the food chain, from farmworkers to grocery store clerks to fast-food restaurant employees, called on Gov. Roy Cooper and other state officials in September to protect workers’ health and safety during the pandemic.

“Workers on the frontline of North Carolina’s food system have been disproportionately impacted by COVID-19 due to limited workplace protections and enforcement,” wrote the group in their open letter to top state officials.

“Since the beginning of this deadly pandemic, North Carolina has prioritized corporate profits and industry relationships over the health of our food workers, their families, and our communities. This must end today,” noted the Sept. 25 letter.

Protests by fast food workers have drawn attention to the lack of protections that predates the pandemic. In North Carolina, workers at private companies are not entitled to paid sick leave. That meant that Freddy’s was under no obligation to pay workers for the time they needed to quarantine after the two cases of COVID-19 in their store.

The Families First Coronavirus Response Act, which was passed in March to provide paid sick leave to eligible workers who quarantine during the pandemic, didn’t protect them either. Under the law, workers at businesses with more than 500 employees (like the franchisee that owns the Freddy’s where Allen works) are not protected. Moreover, the rule is set to expire at the end of the year, at which point there will be no federal leave policy in place.

While Freddy’s has now introduced paid sick leave for workers who test positive, the company has given no indication that they will expand the protection to other workers.

If another of Allen’s coworkers tests positive for COVID-19, she’ll have to keep going to work anyway.

“Going into work scares me every day. I have to deal with customers, I have to touch money,” she Allen. She takes the bus to and from work, an hour each way. “I live with my parents and my sister so if I caught it, I would take it back to three people and I know they would be out of work. It’s a scary thought.”

Allen’s demands are directed not just at her employer but also at the legislators.

“We need North Carolina to create a council that includes essential workers, if we had a voice in our industry we would already have paid sick days, hazard pay and other protections,” Allen said in a video posted by Raise Up for $15’s Twitter account.

She also believes action is needed at the federal level, to extend paid sick leave protections under the FFCRA.

“They need to change the law — they need to have quarantine pay for everybody, not just small businesses but large businesses,” Allen said. “Because coronavirus is a scary thing to potentially catch and if you’re not working for two weeks how are you going to live and survive?”

Sophie Kasakove covers economics for The News & Observer in Raleigh, North Carolina. This dispatch is part of a series called “On the Ground” with Report for America, an initiative of The GroundTruth Project. Follow her on Twitter: @sophiekasakove.