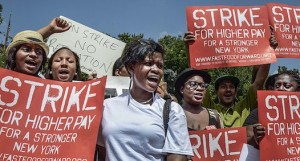 Thousands of workers in roughly 150 cities are expected to participate

Fast food workers in at least 150 cities nationwide will walk off the job on Dec. 4, demanding an industry-wide base wage of $15 per hour and the right to form a union. Workers unanimously voted on the date for the new strike during a Nov. 25 conference call, held shortly before the second anniversary of the movement’s first strike.

The first of the recent fast food strikes took place on Nov. 29, 2012, in New York City. Two hundred workers from various fast food restaurants around the city participated in that strike, making it the largest work stoppage to ever hit the fast food industry. Since then, the size of the movement has ballooned several times over: With the backing of the powerful service sector labor union SEIU, the campaign has come to include thousands of workers in the U.S.

One of the campaign’s main targets, the McDonald’s Corporation, has long maintained that labor protests against the company are not actually strikes in any meaningful sense.

“These are not ‘strikes,’ but are organized rallies for which demonstrators are transported to various locations, and are often paid for their participation,” said a company spokesperson in an emailed statement. “At McDonald’s we respect everyone’s right to peacefully protest.”

The National Worker Organizing committee, a nationwide steering group of 26 fast food workers around the country, approved the Dec. 4 strike date before it was proposed to the rest of the workers. Workers from all 150 cities involved in the campaign were then invited to vote on the date over a Nov. 25 conference call.

The proposal for a strike date was put forth by Burger King and Pizza Hut employee Terrence Wise, a leader in the Kansas City, Missouri branch of the committee. He exhorted workers across the country to recruit more co-workers and make the Dec. 4 the date of the biggest strike yet.

“We want to be bigger, bolder and better,” he said. “We’re going to show this movement is bigger than ever.”

Rev. William Barber, head of the North Carolina NAACP also spoke during the conference call. Barber is a prominent supporter of the fast food campaign and the architect of North Carolina’s Moral Mondays events, a series of rallies and sit-ins protesting voter ID legislation and other recent conservative reforms to state law.

“I want you to know without a shadow of a doubt that the fight for labor wages and the fight for civil rights are two movements headed in the same direction,” Barber told the striking workers.

Noting the NAACP’s support for the fast food campaign, Barber suggested that recent low-wage strikes are on the same order of importance as the sit-in campaign of the civil rights era.

“The battle for fair wages is as critical as the battle that young people waged in the 1960s when they came into the sit-in movement,” he said.

Latonya Allen, a home health care worker from Atlanta, Georgia, and Abera Siyoum, a worker at Minnesota’s Minneapolis-St. Paul airport, also spoke on the call. Home health care workers and airport service workers are also engaged in campaigns for higher wages and improved working conditions. And workers from both industries will be rallying in support of the fast food workers on Dec. 4.

“In Minneapolis and across America, we are fighting for $15 because we want to change our lives for the better,” said Siyoum. “This is why I’m proud to stand together with fast food workers and home care workers. This is why I’m in this movement.”

The home health care worker and airport worker campaigns share a sponsor in common with the fast food movement: The Service Employees International Union, or SEIU, a powerful force behind many of the recent low-wage strikes. Over the past several months, many low-wage worker campaigns – including some that don’t receive significant SEIU support – have adopted some of the rhetoric of the fast food campaign. Recently, the Walmart workers’ campaign OUR Walmart adopted the fast food workers’ signature demand of a $15 base wage.

The $15 demand has gained some legislative traction as well. Since the first fast food strike, San Francisco and Seattle have both voted to raise their minimum wages to $15 per hour. Numerous other cities and states have raised the minimum wage to lower levels.

The voting portion of the conference call took well over an hour. Although 150 cities were reportedly represented, they were “consolidated” into between 50 and 60 regions in order to speed the process along.

The vote itself may have been more a formality and an exercise in building enthusiasm than anything else. None of the regions voted nay, and each one responded to the call for a vote with chant or cheer. Workers from Tucson, Arizona chanted, “No justice! No Grease!” Those calling in from Richmond, Virginia sang the line, “We are united workers.”

Some workers also repeated what has been a common refrain for the movement: “Whatever it takes.” The most recent fast food strike, which took place in early September, was the first to feature widespread acts of civil disobedience. According to a public relations firm connected to the fast food campaign, nearly 500 workers were arrested during that strike for activities such as obstructing traffic. Another strike in Maywas accompanied by solidarity rallies by fast food workers in 32 other countries around the globe.

A spokesperson affiliated with the campaign told Al Jazeera that no civil disobedience or international rallies are being planned this time around. However, global solidarity was very much a theme on the conference call. Several workers in the campaign recently traveled abroad to meet with fast food workers in other countries, and some of them discussed their experiences on the call.

Alvin Major, a KFC employee in Brooklyn, New York, visited fast food workers in Denmark, France, and the United Kingdom. He said he was struck by working conditions in Denmark, where a McDonald’s employee can earn as much as $20 per hour.

“These people are willing to fight and unite with us to get a better agreement in America,” he said. “In America we don’t have benefits, we don’t have anything.”