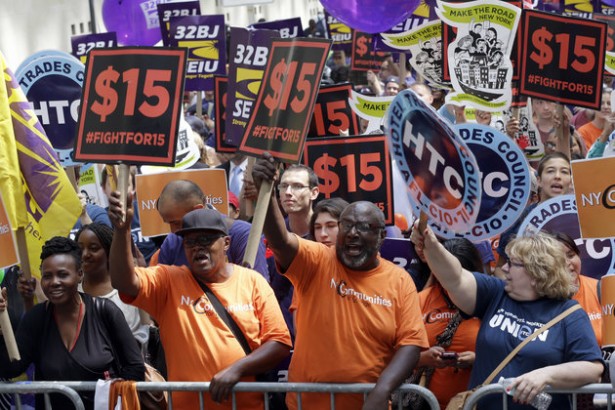 Starting with strike to coincide with Democratic debate in Charleston, workers launch 2016 initiative to push candidates on both sides of aisle to support $15, union rights

Nationwide –Fast-food workers announced Friday that an unprecedented wave of strikes and actions calling for $15 and union rights will hit this primary season to hammer home to candidates that the nearly 64 million Americans paid less than $15 an hour are a voting bloc that cannot be ignored.

The program will kick off Sunday, when fast-food workers will strike in Charleston, S.C. and nearby cities, with thousands of fast-food, home care, child care and other underpaid workers converging on the Democratic debate to challenge candidates to “come get our vote.” Workers are planning additional actions for the primary season—targeted at both Democrats and Republicans—that will include more strikes coinciding with presidential primary debates.

Workers will also continue to collect signatures on their Fight for $15 Voter Agenda, a five-point platform that launched late last year and calls for $15 and union rights, affordable child care, quality long-term care, racial justice and immigration reform—issues identified by underpaid workers as key factors in whether they will go to the polls for a candidate.

“Workers need a raise and we need it now,” said Betsy Smalls, a 57-year-old from North Charleston who works at McDonald’s and plans to vote for the first time in her life in November. “Whether it’s McDonald’s and other large companies raising pay or politicians using their power to lift wages, we need higher pay any way we can get it. And we will stand with any politician in any political party who gets behind our call for $15 an hour and the right to a union.”

The debate, cohosted by the Congressional Black Caucus, comes on the eve of Martin Luther King, Jr. Day. Dr. King was killed in Memphis, where he went to support sanitation workers striking for their basic human right to earn a decent living in exchange for full-time work. African Americans have the highest poverty rate—27.4 percent—among racial and ethnic groups in America.

“Martin Luther King Jr. united economic and racial justice in our public consciousness, but too often our elected representatives ignore how these issues are intertwined,” said Ann Washington, a Charleston-area home care worker. “Home care workers who allow older Americans and people with disabilities to live with dignity and independence in their communities are among the lowest-paid people in the country. I’m casting my vote in 2016 for politicians who stand with us and stand up for $15, union rights and an end to the long-term care crisis that’s hurting communities and families in every state.”

The decision to launch an aggressive primary effort comes two months after fast-food workers made headlines  with a vow during a nationwide strike to use the power of their fast-growing movement to elect candidates in 2016 who support $15 an hour and union rights. As a result of the strike in 270 cities and an evening protest outside the GOP debate in Milwaukee,  the first question directed at candidates that night asked them to respond to the demands of fast-food workers seeking $15 and union rights.

As the Fight for $15 builds a political front ahead of the 2016 election, the  New York Times and  USA Today have both warned candidates who ignore the growing movement that they do so “at their own peril.” Meanwhile, the  Associated Press said underpaid workers are flexing, “increasingly potent political muscle,” and  BuzzFeed has said they “could make up a powerful new voting bloc.”

The Fight for $15 has built a growing awareness that $15 is the minimum wage level American workers in every part of the country need to survive and pay for the necessities to support their families. In September, 200,000 fast-food workers in New York won a pay raise to $15 an hour following a recommendation from a wage board appointed by Gov. Andrew Cuomo. The governor is now pushing to make New York the first state in the nation with a $15 minimum wage. Cities including Seattle, San Francisco, and Los Angeles have raised their minimum wage to $15 an hour. And home care workers in Massachusetts and Oregon won $15 statewide minimum wages earlier this year. Companies including Facebook, Aetna, Amalgamated Bank, and Nationwide Insurance have raised pay to $15 an hour or higher this year, while workers demand that fast-food companies like McDonald’s do the same.

All of the major Democratic presidential candidates support the Fight for $15, and the Democratic National Committee voted in August to make a $15 minimum wage an official part of its 2016 platform. On November 10, leading Democratic candidates  Hillary Clinton, Martin O’Malley and  Bernie Sanders tweeted their support for the strikers, while Sanders joined a strike line of federally-contracted workers in Washington, DC. In June, Clinton told fast-food workers at a national convention in Detroit, “I want to be your champion,” and said that “what you’re doing to build the Fight for 15 movement is so important.” In recent months, Clinton has held round-table meetings with home care and child care workers who are fighting for $15.

Amy Reece, a child care worker from Charleston who hasn’t seen a wage increase in ten years, said: “Our families are trapped in a vicious cycle of going to work just to pay for child care, which is what makes it possible for moms and dads to get to their jobs. I’ve been a child care provider for more than 10 years and never really thought politics was for me. But the Fight for $15 is forcing real change across our country, and I’m one of the nearly 64 million Americans who make less than $15 and cannot be ignored anymore. Candidates, come get my vote!”

With support for $15 high among Democratic candidates, strikes at the Democratic debates will focus not only on higher pay, but the workers twin demand of union rights. Workers say they shouldn’t have to rely on sporadic and incremental raises dependent on the good will of politicians. They are calling for an ongoing vehicle for making sure their wages rise with profitability and will call on all the candidates to discuss their plans to help make sure workers are able to join organizations that ensure their wages rise with profitability, productivity and economic growth.

Seventy-two percent of workers in the U.S. who are paid less than $15 an hour approve of labor unions, according to the NELP poll. The survey found that 72% believe unions can make a real difference in whether or not workers like themselves get raises, and that 66% say they would have a better chance of making $15 an hour and being able to support their families if they could join a union. A  recent Gallup Organization poll found a sharp rise in the past year—to 58 percent—in approval of labor unions among all Americans.

Forty-six percent of workers in America are paid less than $15, including 48% of women, 54% of African Americans, and 60% of Latinos.