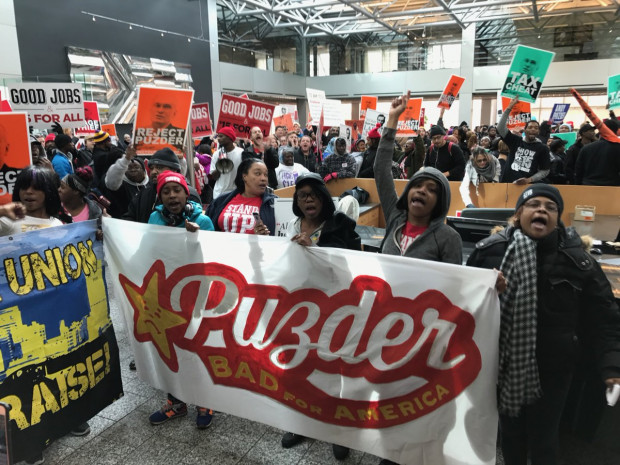 Labor Nominee May Not Have The Votes To Win Confirmation

Note: Four Republican senators: Susan Collins, Lisa Murkowski, Tim Scott, and Johnny Isakson all sit on the Senate Committee on Health, Education, Labor and Pensions, and their opposition could kill the nomination of Mike Puzder for Secretary of Labor. Right now they claim they are undecided on whether they will vote to confirm the nominee. A poll by Hart Research Associates released by the National Employment Law Project o February 14, shows that Alaska voters (by 61% to 23%) and Maine voters (by 65% to 22%) believe their senators should oppose the nomination.  KZ 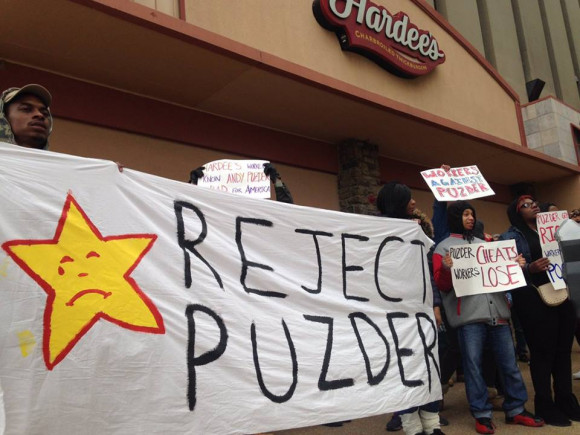 Hundreds of fast-food workers flooded the lobby of Hardee’s corporate headquarters in St. Louis, Mo., this afternoon, demanding that Trump’s labor nominee Andy Puzder withdraw his nomination or be rejected by the U.S. Senate. 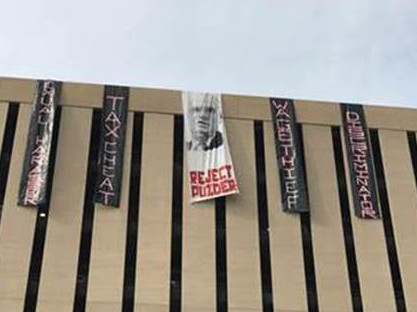 Chanting “Hold Your Burgers, Hold Your Fries, Down With Puzder and His Lies” and “Make a Dollar, Get a Dime, Puzder Won’t Pay Overtime,” workers unfurled a banner reading “Puzder: Bad for America” in the lobby of the building.

The also dropped a banner from the parking garage across from Hardee’s headquarters. The message: reject Puzder.

The Fight for $15 movement escalated its actions against Andy Puzder when hundreds of cooks and cashiers from multiple states converged on Hardee’s corporate headquarters in St. Louis, Mo., while hundreds more will descend on CKE corporate offices in Anaheim, Calif. In two dozen other cities, food service workers protested at Hardee’s Carl’s Jr. and McDonald’s restaurants. McDonald’s CEO recently expressed support for Puzder despite an escalating series of unsavory revelations and complaints against the beleaguered nominee.

The takeover at Hardee’s HQ hit as thousands of workers flooded Carl’s Jr., Hardee’s and McDonald’s restaurants during the lunchtime rush in cities across the country.  Workers also marched on CKE corporate offices in Anaheim, Calif.

Working people held the protests as Puzder revealed he can’t even follow the law in his own home. This week, Puzder admitted that he didn’t pay legally required taxes for his housekeeper for many years and that he only paid up when pressured to do so because of his nomination. At the protests, workers crried signs that read, “Andy Puzder: Worst of the Worst CEOs” and “Puzder: I Pay My Taxes, Why Don’t You Pay Yours?”

Puzder’s restaurants have a long and troubled history of worker abuse. In 60 percent of Department of Labor investigations since 2009, CKE restaurants and franchises were found to have violated wage and hour laws. Since Puzder became CEO of CKE in 2000, the Occupational Safety and Health Administration, which falls under the DOL,  has found 98 safety violations at Carl’s Jr. and Hardee’s locations, with 36 of them capable of causing death or grave physical harm. Capital & Main reported that, under Puzder’s tenure as CEO, Carl’s Jr. and Hardee’s have been hit with more federal employment discrimination lawsuits than any other major U.S. hamburger chain.

According to CKE’s latest financial disclosures, Puzder makes as much as $10 million a year, which means he makes more in one day than he pays his minimum wage workers in one year. Despite this, he has been an outspoken opponent of minimum wage hikes, spending $10,000 of his own money in 2006 to block a Nevada ballot initiative raising the minimum wage to just $6.15. He’s shown open contempt for men and women who work in his restaurants, calling them “the worst of the worst.” A report from the National Employment Law Project estimated Puzder’s low pay costs taxpayers $250 million a year in public assistance.

Puzder has also opposed basic protections and working Americans’ rights, like meal and rest breaks for employees working long hours. He has even said he would like to replace Carl’s Jr. workers with machines because they “never take a vacation, they never show up late, there’s never a slip-and-fall, or an age, sex, or race discrimination case.” Puzder has also supported repealing the Affordable Care Act and cuts to Medicaid, even while he forces his own workers to rely on these programs by denying them health care.

You can watch video of the protest here.