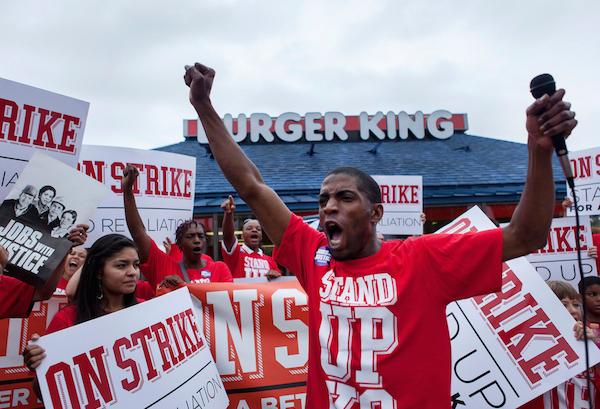 Two years after 200 New York City fast-food workers walked off their jobs, sparking a nationwide movement for $15 and union rights, cooks and cashiers at McDonald’s, Burger King, Wendy’s and other major national chains went on strike Thursday in more than 190 cities— the most ever—joined for the first time by convenience store clerks and dollar-store workers in two dozen cities.

Baggage handlers, skycaps, wheelchair attendants and aircraft cleaners from 10 major airports supported the strikers as the Fight for $15 movement continued its spread to new industries. The Home Care Fight for $15, which launched in September, more than tripled in size, reaching 19 cities from coast to coast. Also Thursday, federally-contracted food service workers at the McDonald’s location at the Smithsonian Air and Space Museum in Washington, DC went on strike, joining the call for for $15 an hour.

“Every day I look my kids in the face and they realize we live in poverty. They are the reason I fight,” said Terrence Wise, a 35-year-old father of three who is paid $9.30 an hour at Burger King in Kansas City, MO and is the subject of a major New York Times profile published Thursday. “It’s inspiring to see airport, home care and retail workers fighting for $15, too. This movement is larger than ever and we are going to keep standing up until we win.”

Workers went on strike in every region of the country at major fast-food restaurants including McDonald’s, Burger King, Wendy’s, KFC, Taco Bell and Domino’s. The fast-food movement continued to spread, with workers walking off their jobs for the first time in Jackson, Miss., Knoxville, Tenn., Buffalo, N.Y., Olympia, Wash. and dozens of smaller cities and towns.

The strike kicked off late Wednesday, when convenience store workers walked off their late-night shifts in in Detroit, St. Louis and Kansas City, forcing gas stations and stores to close. In Pittsburgh, the entire shift at a Wendy’s restaurant walked out, forcing the restaurant to close, and a downtown McDonald’s and Dunkin’ Donuts locked their doors after workers went on strike. In San Diego, a McDonald’s closed its doors after workers went on strike. And in Boston, workers prepared for an afternoon vigil for Maria Fernandes, the Dunkin Donuts worker who died last summer while napping in a parking lot between shifts.

Cooks and cashiers marched through fast-food restaurants and drive thrus across the country, delivering a Christmas wish list to managers in Wilmington, DE, wearing “Lucha Por $15” shirts in Phoenix, and holding a huge banner in Knoxville that read, “Knoxville Needs a Raise.”  Home care workers, many alongside their clients, raised signs in cities like Minneapolis, Chicago and, Los Angeles, calling for $15 an hour. And airport workers supported strikers in 10 cities, including New York and Minneapolis.

In Greensboro, N.C. the Rev. Dr. William Barber II, president of the North Carolina NAACP, joined workers on the strike lines. “This battle for fair wages is as critical as the battle young people waged in the 1960s when they demanded a right to sit at lunch counters,” Rev. Barber said. “If we invest in living wages and pay $15 to fast-food workers, more money is going to go into the economy, more jobs are going to open up. It is a win for the entire country.”

Across the country, workers reacted to the recent decisions not to indict police officers in Ferguson, MO and Staten Island, NY by beginning their strike actions a with a minute of silence and their hands held over their heads. Workers took this action to show support for the families of Eric Garner and Michael Brown and to demonstrate they will keep fighting until every American life is respected and every American is paid enough to support their families with dignity.

Check strikefastfood.org for updates throughout the day.

Inspired by the bold, national actions of fast-food workers, other workers are joining together to boost pay in fast-growing service sector jobs. Workers from discount stores like Dollar Tree and Family Dollar and convenience stores like Speedway and BP walked off their jobs Thursday in two-dozen cities, forcing many stores to close.

“It doesn’t matter if you work in a dollar store or a convenience store, in a fast-food restaurant, at the airport or in someone’s home—we are all struggling to survive,” said Andrew Ferguson, who works at Dollar Tree in Detroit and is paid $8.30 an hour. “We can’t support our families on these low wages, we are tired of it, and we’re ready to fight for more.”

In 19 cities, including Atlanta, Boston, Chicago, Detroit and Los Angeles, non-union and union home care workers who provide in-home support and care for senior citizens and people with disabilities joined striking fast-food workers in front of McDonald’s restaurants. In many instances, clients protested alongside their home care providers in support of their fight for better pay.

“We work hard to care for seniors and people with disabilities, but we aren’t paid enough to cover basic bills for food, clothing and rent for our own families,” said Sue Buckland, a home care worker in Denver who is paid $10 an hour after seven years on the job. “We’re joining with fast-food, airport and retail workers because we can’t wait any longer for higher wages.”

For the first time, workers at 10 of the nation’s busiest airports joined together with fast-food and home care workers in calling for $15 and union rights. Earlier this week, the workers sent a letter to the CEOs of America’s six largest airlines calling on them to partner with airports that are trying to raise wages. “As airport workers we have pledged to stand together with people who work in homecare and fast food to fight for $15 an hour,” workers wrote.

“When I look at the fight of fast-food workers, I see my fight,” said Abera Siyoum, a disability cart driver who is paid minimum wage of $8 an hour at Minneapolis-St. Paul International Airport. “We live in the same community and suffer the same problems and that’s why we’re all fighting to make a change.”

Rewiring How America Thinks About Wages

Thursday’s strikes come one week after Walmart workers led nationwide Black Friday strikes to protest the company’s illegal threats against workers calling for $15 an hour and full-time work. The growing Fight for $15 has been credited with elevating the debate around inequality in the U.S.  Slate called the movement a “stunning success” and wrote that, “dedicated fast-food workers have managed to completely rewire how the public and politicians think about wages.”

What seemed like a far-fetched goal—$15 an hour—is now a reality in SeaTac and Seattle, where Bloomberg News said the city adopted “the rallying cry of fast-food workers” and where local low-wage airport workers played a leading role in winning the historic wage increase. In November, San Francisco became the third city in the U.S. to adopt a $15 minimum wage, and just this week, Chicago lawmakers voted to raise the minimum wage to $13. Since the first strike in 2012, more than 8 million low-wage workers across the country have gotten raises through local ballot measures, city and state legislation and contract negotiations.

“The fast-food giants have seemed clumsy, and wrong-footed by the surge of protest,” the New Yorker wrote, saying they responded to the workers by telling them to get a second job, sing away their stress and apply for public assistance. But fast-food workers have replied by ratcheting up their movement. At their first nationwide convention in Chicago last summer, they vowed to do whatever it takes to win $15 and union rights, and in September, nearly 500 were arrested during strikes that hit 150 cities.

The Fight for $15 is drawing support from key political figures. President Obama praised the fast-food workers, saying in a Labor Day speech that they are, “organizing to lift wages so they can provide for their families with pride and dignity.” And Hillary Clinton applauded them in a speech to leading Democrats, calling the fast-food workers’ fight for higher pay, “a movement that is not waiting for Washington with its gridlock and grandstanding.” The urgent need for solutions to America’s low-wage crisis is already emerging as a key issue in the run-up to the 2016 election. In The New York Times, David Leonhardt wrote, “[a]s the 2016 presidential campaign begins to stir, the central question will be how both parties respond to the great wage slowdown.”

Labor Board Determines McDonald’s is the Boss

Thursday’s strike follows a determination by National Labor Relations Board’s general counsel that, despite McDonald’s repeated claims, the company is a joint employer that exerts substantial power over its employees’ working conditions. For two years, McDonald’s workers and other fast-food workers have been joining together and going on strike, calling for $15 and the right to form a union without retaliation. But time and time again, the company and other industry players have tried to sidestep workers’ calls, inventing a make-believe world in which responsibility for wages and working conditions falls squarely on the shoulders of franchisees.

The NLRB move shows that McDonald’s can no longer hide behind its franchisees for the poor and often illegal treatment of workers. The government’s determination is the latest challenge to the fast-food industry’s low-wage business model, in which franchisors reap rewards of a profitable industry while forcing franchisees to shoulder all the risk. In March, McDonald’s workers in three states filed class-action lawsuits against the company, alleging widespread wage theft. The New York Times wrote that the suits, “argue that both the corporate parent and the independently owned franchises where many of the plaintiffs work are jointly responsible for illegal pay practices carried out by the franchises….That strikes at the heart of the low-wage fast-food business model.”

Not only do fast-food jobs pay so little that a majority of industry workers are forced to rely on public assistance, but many workers don’t even see all of the money they earn. In addition to the class-action suits filed against McDonald’s alleging widespread and systematic wage theft, a poll by Hart research showed 89 percent of fast-food workers have had money stolen from their checks.

During the tour, American McDonald’s workers rallied a crowd of 2,200 in Tokyo for higher wages, helped launch the national Philippine fast-food worker movement, addressed thousands of union workers in Denmark and the UK, protested low wages at the largest McDonald’s in France, and forged ties with local unions in Argentina. The tour spotlighted criticism of McDonald’s low-wage business model in some of its most critical growth markets, and inspired fast-food worker movements abroad.

As fast-food workers in the U.S. fight for a living wage and the right to a union, Denmark—where workers earn $20 or more per hour, strikes a devastating blow to McDonald’s argument against paying higher wages. The New York Times quotes the general manager of HMSHost, which runs fast-food operations at Copenhagen Airport, acknowledging that Denmark’s $20 minimum wage for fast-food workers makes it “more expensive to operate. But we can still make money out of it — and McDonald’s does, too. Otherwise, it wouldn’t be in Denmark.”

Fast-food workers went on strike in the following cities: