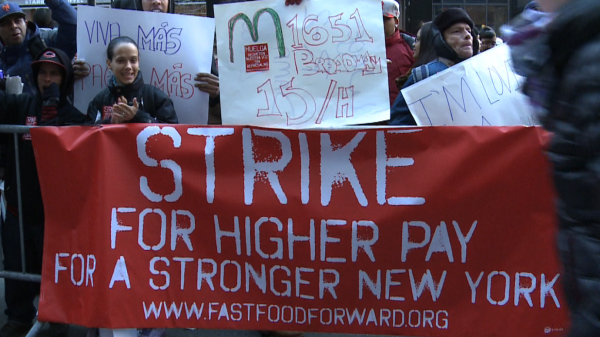 “I’m sick of seeing my co-workers and me essentially get pushed and pushed and barely be able to eat,” Taco Bell employee Caroline Durocher told The Nation Wednesday. “And I think it’s time that we pushed them back.” Durocher said she’s hopeful that both co-workers on her late night shift will walk off the job with her.

Like recent fast food strikers in New York, Chicago, Milwaukee, St. Louis, and Detroit, the Seattle strikers are holding a one-day walkout to demand a raise to $15 per hour and the right to form a union without intimidation. Like those cities’ strikes, Seattle’s is supported by a coalition of labor and community groups; in each case, the Service Employees International Union has been involved in supporting the organizing efforts. The Seattle campaign, Good Jobs Seattle, is backed by groups including Working Washington, the Washington Community Action Network, and OneAmerica.

“A lot of times we’ll work ‘til 4 or 5 in the morning trying to get things done for corporate people to make money,” said Durocher. “And we don’t ever see any of that money.” With a good raise, she told The Nation, “I’d be able to save money to get into my own place…I’d be able to eat something other than Taco Bell. I’d be able to go back to school.”

The fast food strike wave represents organized labor’s most dramatic challenge to the massive, fast-growing, and virtually union-free industry. As I’ve written previously, fast food’s low-wages, precarious employment, and emotional labor are increasingly representative of the larger economy. The shape of the strikes – single-day walkouts, by aminority of the workforce, with an emphasis on community support – represents anincreasingly prevalent labor strategy for attempting to build worker organization, squeeze management, and avert retaliation, in the face of legal and economic changes that havemade strikes more risky and less effective. (While other cities’ campaigns filed National Labor Relations Board prior to their strikes alleging law-breaking by management, as of Wednesday afternoon the Seattle campaign had not.)

Rather than training all of their firepower on a single company, the fast food campaigns have chosen to target all of the industry players at once. That strategy risks diluting resources and reducing the pressure on an individual CEO, but offers the chance to draw greater public engagement and perhaps to peel off whichever chain is most willing to make a deal. While fast food workers are often legally employed by franchisees, any realistic scenario for winning union recognition or a major pay hike would require convincing national CEOs that concessions would be less painful than further conflict. That remains a tall order.

Asked whether she was nervous about retaliation for going on strike, Durocher answered, “No, because it’s worth it.” She said she was “really excited” to strike after seeing other fast food workers do so on the East Coast and in the Midwest: “It’s so empowering, and it reminds me that it’s not just Seattle – it’s the whole country that needs to change.”