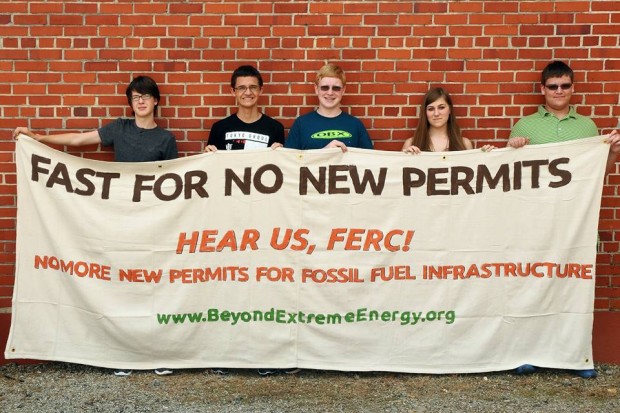 Washington, DC – The “Fast for No New Permits” to stop the Federal Energy Regulatory Commission from issuing more permits for fossil fuel infrastructure begins on Tuesday, September 8 and will continue until September 25 when the Pope speaks at the United Nations in New York City. Some participants will fast for the entire time, some will fast for one or a few days, some will fast in front of the FERC and some will fast from home. This is part of the Beyond Extreme Energy’s (BXE) campaign to stop the FERC from rubberstamping oil and gas permits without regard for the health and safety of the communities that are impacted and the impacts these projects have on locking us into a future devastating climate crisis.  BXE demands that the US transition immediately to a clean and sustainable energy future.

Here are statements by some of the participants (from BeyondExtremeEnergy.org):

Francis Eatherington, Roseburg, OR – I will be fasting to help FERC understand the devastation caused by permitting projects like the Jordan Cove LNG Export Terminal and pipeline in my home state of Oregon. In September FERC will be releasing their final environmental study which will likely claim there is no harm from exporting fracked natural gas from Oregon to Asia.

FERC will allow Veresen, a foreign corporation, to take land from over 300 Oregonians, including my land, with eminent domain to build a 230-mile pipeline across our state’s pristine forests and farmland, ending at Coos Bay on the Pacific coast.  There, in an area overdue for a subduction-zone earthquake and tsunami, FERC will allow the LNG export terminal to be built on a sand dune.

I am fasting because FERC has not responded to the thousands of comments Oregonians have submitted. They have only responded to Veresen’s “need” to raise gas prices so that “exploration” (fracking) can continue and expand.

I am fasting because the Jordan Cove project would impact 33 imperiled plant and animal species, including 7 species of whales. It will severely harm the rare spotted owl, a species we protect on our property.

This September FERC is scheduled to order us to give 8 acres of our land to Veresen, forcing us to help facilitate the destruction of the world. I’m fasting because I’ve tried everything else, so now I will try this.

Jamie DeMarco, Baltimore, MD – I often find it difficult to express how much I sincerely and personally care about acting on climate change. Fasting  can effectively make clear those inner beliefs because a fast can only be completed with a conviction more powerful than the instinct to eat when you’re starving. To survive empty of food you have to fill yourself with the light of the world, and that light will illuminate for everyone what I already know is within me.

Speaking about our passion is like telling your friend about a view in the middle of the night. Your words cannot compare with how it feels when the sun rises and they can see the landscape. A fast is the sun rising within us, allowing others to see the landscape of our heart.

I want FERC to know that, for me, climate change is more than a political issue, and my fast will make that clear.

Ellen Barfield, Baltimore, MD – I will join the fast, probably juice not water, for the spiritual and group strength it develops. Fasting with colleagues for a political purpose is such a strong statement of principle. Mildly, on juice, or not so mildly on water only, suffering while advocating ending fracking permits can strongly impact FERC workers, corporate employees, and politicians as well as our activist colleagues, and at this particular time so many other sympathetic activists who will be in DC for the Pope. We in the core group of BXE fasters, and the larger anti-climate change community, will be using so many techniques during the Pope’s visit, and I’m excited that BXE will have this ongoing presence for this important month. I’m wondering if we might plan on another shorter fast or other event during the big Paris climate summit in November too.

Herb Fitzell, Richmond, VA – I am fasting in order to focus on Pope Francis’ call for personal conversion and cultural transformation. Laudato Si’ shares with us what is most beautiful in two thousand years of Christian social teaching. My intention is, in the words of Francis, “ … to become painfully aware, to dare to turn what is happening to the world into our own personal suffering and thus to discover what each of us can do about it.” In our rapidly paced world, I have frequently not been grateful for the food I have received or the goods I have taken from our earth. This fast will allow me the opportunity to reflect on Francis’ call to “… stop and give thanks to God before and after meals. I ask all believers to return to this beautiful and meaningful custom. That moment of blessing, however brief, reminds us of our dependence on God for life; it strengthens our feeling of gratitude for the gifts of creation; it acknowledges those who by their labour provide us with these goods; and it reaffirms our solidarity with those in greatest need.”  I hope to answer Francis’ call not only by remembering this fast and saying grace in the future, but by also discovering what I can do to care for creation. My intention is to better understand the meaning of Laudato Si’, and to act upon it.

My fast is also an expression of solidarity with the world’s scientists who have labored so hard to nail down the empirical data on climate change, and with the activists who have sacrificed so much to make known to a broader public those environmental facts from which the United States Congress continues to run. It is an expression of solidarity with the poor of this world and with all the creatures with whom we share our planet. It is a cry in solidarity with all creation — which now cries out to those whose hearts are hardened and who would hold Earth herself in bondage — “Let my people go”!

Jerome Wagner, Wayne, NJ – Here in Wayne, our frontline concerns are transmission infrastructure (pipelines and trains, specifically), extreme weather (e.g., Irene, Lee, and Superstorm Sandy), and profligate consumption. I’ve been a climate activist since 2009 and I’ve been arrested for climate-related non-violent civil disobedience a number of times. Fasting is a next step for me. I will be fasting for myself (for continued personal conversion), my children, their children, friends, acquaintances, colleagues, extraction communities, refugees, climate alarmists and climate deniers, and everyone else – we’re all in this boat together, aren’t we?! My greatest hope is to tap into the Spiritual Reserve that runs through all, and to therein find a life beyond violence – beyond fear – and beyond extreme extraction.

Lee Stewart, Washington, DC – As an organizer with Beyond Extreme Energy, I’ve spent weeks standing on the sidewalks outside FERC. When FERC employees look at my presence with impatience or annoyance, I feel like my heart is being stomped on. Having put my heart and soul on the line in that space, it has become sacred to me. I fast to address the parts of myself I’ve put into those sidewalks, to honor and acknowledge the place where so much violence is permitted,  and to face up to the complicity of FERC employees in gross, unacknowledged aggression.

Jane Johnson, Amherst, MA – I will be fasting on September 24th, which would have been my brother’s 70th birthday. He died April 1st on his bicycle in Canberra, Australia, before he had finished his novel about Climate Change, The Green Bag. Here in Amherst, MA, I’m working with Quakers, other faith groups, and Raging Grannies to fight the proposed Kinder Morgan pipeline. Here’s a song I’ve just written, inspired by that work and BXE.

(to the tune of “Supercalifragilisticexpialidocious”)

Charlie Strickler, Harrisonburg, VA – As I continue to read the science of climate change, I know something has to be done. It’s pretty simple chemistry and physics, not too hard to understand. I started my personal journey by trying to be more sustainable. I changed light bulbs, recycled, etc. and moved on to more serious things such as home energy efficiency, solar panels, and an electric car. I can’t change rising CO2 levels alone as it grows exponentially. What’s next?

My own next step was being willing to be arrested in front of the Whitehouse protesting something tangible, the KXL pipeline, which resulted in a little success. Now it is time to try to influence a few people in my little corner of the world by demonstrating my personal commitment through fasting in front of FERC (Federal Energy Regulatory Commission). Trying to influence FERC not to permit fossil fuel infrastructure and be a rubber stamp of big moneyed interest is just another stepping stone to reducing our dependency on fossil fuels. If it is built, it will be used to increase our CO2 pollution.

I hope to draw on the strength of others who are fasting in this struggle to help get things moving to protect our planet from ourselves. I love life and hate to think what we may be leaving future generations. Emulation is not an option at this point for me.

As a way forward, stopping pipelines is not enough. We need to put a serious price on carbon to really get us moving in the right direction. Now is the time “… to act in earnest.

Lyn Shaw, Middletown, CT – We have only our bodies to give.

After politely written letters; passionate protests in our home states; nonviolent arrests following discernment; walks across the country; endless Congressional lobbying; hundreds of phone calls made and petitions sent to those who represent us politically- including the President; and dutiful testimony written/spoken at a scoping hearings in our home states…

We have now only our bodies to give- our small places in time and legacies.

I will be at a part of the fast, joining with dear friends on behalf of many who cannot themselves sit in front of the Great Enabler, FERC. As the country and the world move into what could be the last days, I will take a stand in the only way left to me.

Peter Nightingale, Kingston, RI – Thinking of future generations, and my grandchildren in particular, I do not know how to explain the destruction we continue to visit upon the Earth they shall inherit.

The Clean Air, Clean Water and Safe Drinking Water Acts have been captured by industry, and FERC, implementing twisted statutes, is the excuse the ruling elites use to continue the devastation.

Unless we undo environmental racism, stop imperial war, and end capitalism itself, we shall fail; only global peace, social justice and defense of the environment shall heal Mother Earth and her children.