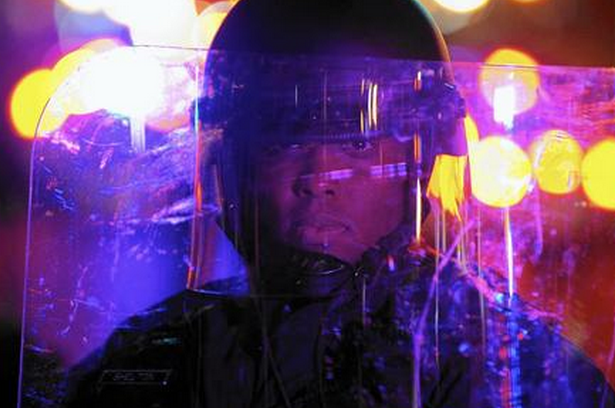 FBI Director Admits Use Of Spy Planes Over Ferguson, Baltimore

Above Photo: An officer keeps protesters away from the Ferguson, Mo., police station in November after the grand jury decision to not indict the officer who killed Michael Brown. (Wally Skalij / Los Angeles Times).

FBI Director James Comey admitted in testimony last week before the House Judiciary Committee that the agency conducted surveillance flights over mass protests against police brutality in Ferguson, Missouri and Baltimore, Maryland over the past year, at the request of local police departments. Comey’s remarks confirmed an earlier Associated Press report revealing the FBI’s extensive use of secret flyovers throughout the country.

The hearing itself, mislabeled as being dedicated to the “Oversight of the Federal Bureau of Investigation,” was a further indication of the ability of government agencies like the FBI to carry out illegal mass surveillance against the American population with impunity. Comey contradicted himself at key points through his testimony, which the members of the Committee allowed to pass without comment.

He absurdly claimed in his testimony that the FBI’s flyovers are not used for “mass surveillance,” but only to track specific individuals targeted by an investigation, despite the obvious fact that low-flying, camera-equipped aircraft are ideally suited to follow large numbers of people simultaneously over a wide area. As the ACLU noted recently on its website, new technologies that are now commercially available to police departments nationwide can monitor an area of 25 square miles from low-circling aircraft.

Comey subsequently contradicted this claim when he effectively admitted that the FBI’s spy planes were deployed to Ferguson and Baltimore to spy on the protests as a whole and not specific individuals. “If there is tremendous turbulence in a community, it’s useful to everybody, civilians and law enforcement, to have a view of what’s going on,” Comey told the Committee. “Where are the fires in this community? Where are people gathering ? Where do people need help? And sometimes the best view of that is above rather than trying to look from a car on the street (emphasis added).”

In fact, the federal government closely coordinated with state and local police from day one in both Ferguson and Baltimore in directing the military-style crackdown on largely peaceful protesters. Leading Washington officials, including Barack Obama and then-Attorney General Eric Holder, lent their voices to the demonization of protesters in order to legitimize the use of violence against them. There can be no doubt that the FBI, an organization with a long history of political repression against dissident groups, was intimately involved at the highest levels in the direction of the crackdown.

Comey then explained under direct questioning that the agency does not obtain warrants before carrying out flyovers, because, as he claimed, “We are not collecting the content of anybody’s communication or engaging anything besides following someone in that investigation … The law is pretty clear that you don’t need a warrant for that kind of observation.” However, Comey later admitted to the Committee that at least some FBI planes are also equipped with “Stingray” technology, which mimics cell phone towers in order to fool nearby phones into establishing connections with it, enabling police to monitor communications and track users’ whereabouts.

Although the Justice Department changed its internal policy last month to require the FBI and other agencies to obtain search warrants before using “Stingray” devices, state and local police are able to use their own devices, subsidized by the federal government, with complete secrecy and without even token oversight. Furthermore, while a recent Justice Department memo banned agencies from using drones “solely for the purpose of monitoring activities protected by the First Amendment,” this restriction does not apply to manned aircraft such as those operated by the FBI.

Comey’s claim of a limited scope for surveillance does not square with the extraordinary level of secrecy surrounding the program. The Associated Press story this June, which first revealed the FBI’s use of surveillance flights, traced over 50 aircraft to shell companies set up by the bureau throughout the country, and found that the agency had conducted more than 100 flights in 11 states during a one-month span this spring.

The AP found that some flights circled “large, enclosed buildings,” such as malls and airports, “where aerial photography would be less effective than electronic signals collection,” suggesting the use of “Stingray” technology.

Furthermore, numerous flyovers have been observed in Dearborn, Michigan, a Detroit suburb with the country’s largest Arab-American community and which has been subjected to routine harassment by local and federal police since the September 11th attacks.

Comey’s frank admission of the FBI’s use of aerial surveillance was met with hardly a word of protest from the members of the House Judiciary Committee, ostensibly tasked with overseeing the activities of the federal police. Neither Comey’s claim that the FBI planes were not conducting “mass surveillance” in Ferguson nor his argument that such flights did not require a warrant were challenged by the Committee. Instead, members of the Committee competed with one another in showering Comey and his organization with fawning praise.

The day following his testimony before Congress, Comey gave a speech at the University of Chicago Law School in which he attempted to pin the blame on a supposed rise in crime rates on the increased public scrutiny of police in the aftermath of the Michael Brown killing last year. Comey was in Chicago in advance of this week’s conference of the International Association of Chiefs of Police.

“I don’t know whether that explains it entirely, but I do have a strong sense that some part of the explanation is a chill wind that has blown through American law enforcement over the last year,” Comey said. “I’ve been told by a senior police leader who urged his force to remember that their political leadership has no tolerance for a viral video … Lives are saved when those potential killers are confronted by a police officer, a strong police presence and actual, honest-to-goodness, up-close ‘What are you guys doing on this corner at 1 o’clock in the morning’ policing. We need to be careful it doesn’t drift away from us in the age of viral videos, or there will be profound consequences.”

The theory that a spike in violent crime nationwide in US cities is due in part to fear on the part of police that their activities will be recorded by hostile bystanders and posted on Youtube, known as the “Ferguson Effect,” has no basis in fact.

In the first place, there is no evidence that, outside of a few municipalities, there has been a statistically meaningful spike in violent crime in the United States at all. Second, the claim that police are legitimately concerned that they could face punishment if videos of their activity were recorded does not hold water when even officers who have been filmed committing acts of murder have not been disciplined, let alone arrested and charged with a crime. Finally, the only significant slowdowns in arrest rates this year have been due to work slowdowns, such as those organized in New York City and Baltimore, directed against city administrations deemed to be insufficiently fervent in their defense of the police.

Instead, the Ferguson Effect “theory” is a politically-motivated slander against police brutality protesters designed to portray police as victims and shield their activities from scrutiny. It has been most heavily promoted by right-wing demagogues and officials of local police unions. Even the New York Times, which functions as a compliant mouthpiece for the American state, was compelled to admit in its reporting of Comey’s remarks that the existence of a “Ferguson Effect” was “far from settled.”

The decision by Comey to publically solidarize himself with the arguments of the far-right was allegedly a source of some embarrassment to the Obama administration (the Times cited unnamed officials who “privately fumed” at Comey’s remarks).

However, the administration itself has deliberately allowed killer police to operate with impunity, intervening against the plaintiffs in every police brutality case heard by the Supreme Court, and, through its massive expansion of government surveillance and funneling of military hardware to local police departments, has contributed significantly to erecting the scaffolding of police state forms of rule.

If Comey felt secure in scapegoating police brutality protesters the day after he confirmed that the FBI conducted surveillance against them, it is because he knows his agency is subjected to virtually no democratic restraints.