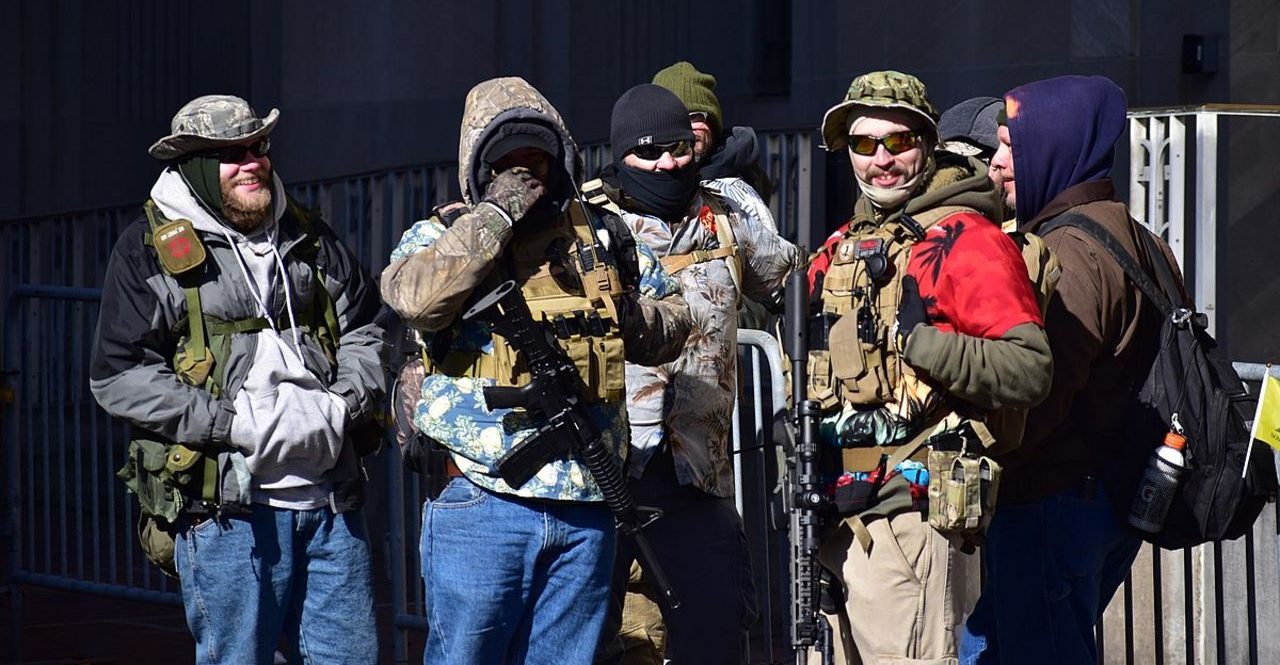 On Thursday, with five days remaining before the US election, the FBI conducted two additional raids in Michigan and arrested Justen Watkins and Alfred Gorman, leaders of a neo-Nazi group called The Base. Watkins was arrested when agents raided a farm in the town of Bad Axe, in the Michigan “thumb,” which members of The Base used as a training grounds and “hate camp.” Gorman was arrested in the Detroit suburb of Taylor.

The two neo-Nazis, aged 25 and 35 respectively, are charged with threatening to murder a left-wing blogger in late 2019, though the timing of the raids indicates the FBI believed The Base’s training camp was related to preparations for election violence. An affidavit filed by a Michigan State Police detective quotes a manifesto penned by Watkins reading: “I will train with firearms, explosives, knives, Ryder trucks, and anything else I have to destroy this KIKE SYSTEM THAT IS GENOCIDING MY people. To victory with PURE UNADULTERATED ARYANVIOLENCE!”

The WSWS warned of potential connections of The Base in Michigan earlier this month, pointing to the fact that weeks before the January arrest of three members of The Base, “Two of the plotters traveled to Michigan where a third conspirator had been staying” and that members had planned to attend a hate camp in the state.

The affidavit also states the investigation was conducted only by the state police and the FBI. This would imply that officials may have conducted the investigation without informing local police and sheriffs departments for fear they are so integrated with the far-right that they would tip off the targets. It is unlikely that the Trump administration was given advanced notice of Thursday’s raids.

The raids raise additional questions about the national scope of Trump’s strategy to mobilize fascist supporters to help steal the election.

In a speech this week in Lansing, Michigan, Donald Trump tacitly defended the actions of 14 militia men who plotted to kill Michigan’s Democratic Governor Gretchen Whitmer. Trump claimed the plot shows Whitmer may “have a problem,” adding, “I mean, we’ll see if it’s a problem, right? People are entitled to say maybe it was a problem, maybe it wasn’t.”

He also threatened the Democratic governors of several battleground states: “All we can say is law enforcement is watching Nevada, it is watching Philadelphia and Pennsylvania because they had a lot of strange things… We’re watching North Carolina, we’re watching Michigan.”

As more evidence emerges of the Michigan plotters’ connections to fascist groups nationwide, these statements emerge more as an admission of criminal conspiracy than an off-the-cuff remark.

According to an affidavit signed by FBI special agent Kristopher Long, one of the 14 militiamen arrested earlier this month for plotting to kill Whitmer, Barry Croft, has high-level connections to militias across the country, including in Delaware, South Carolina, Georgia, Texas and North Carolina. This indicates the plot to kill Whitmer was just one part of a national conspiracy to execute elected officials in advance or in the aftermath of this Tuesday’s election.

The FBI affidavit explains that Croft had communicated with Kevin Massey, the recently-deceased leader of a border militia group in Texas. The WSWS recently warned of connections between the border militia and the plot against Whitmer.

The FBI affidavit reads: “During its investigation, the FBI learned that Croft attempted to provide support to Kevin Massey, who had been convicted of firearms offenses following his involvement in a militia patrol on the border of Texas and Mexico.”

According to a 2019 article in the Washington Post: “Massey, an electrician by trade, was the self-described commander of Rusty’s Rangers, an anti-immigrant militia active in 2014 that regularly posted footage of patrols on Facebook. The militia claimed it had detained migrants at gunpoint and bound their wrists with zip ties. His border activities and violent anti-government rhetoric helped him achieve a small cult following among fellow militia members and a few right-wing bloggers.”

The FBI affidavit quotes what Croft wrote to Massey before Massey’s death:

“The people don’t support what has happened to you…Constitutional thunder and lighting. [sic] Our hour draws near brother… I’m going to North Carolina on Saturday to discuss going to war against the government of North Carolina. They invited me to speak and share tactics. Please come out bro. We need you.”

The FBI affidavit makes no further reference to a possible plot in North Carolina, where Democratic Governor Roy Cooper presides over a state with a Republican state legislature. Cooper is one of the governors Trump has said he is “watching” with the support of law enforcement. North Carolina is a critical battleground state in the 2020 elections.

The FBI affidavit also explains that Croft had engaged in discussions with South Carolina fascists who participated in a May 8 protest against the lockdowns imposed by Republican Governor Henry McMaster, a Trump supporter.

Croft said he planned to come to South Carolina with his “sword,” telling a fellow fascist that far-right groups with whom he had contact “say they want their Governor in custody.” The affidavit explains that on May 3 Croft was texting supporters about “protesting and committing potential acts of violence in Columbia, South Carolina.”

One of the Michigan conspirators, Paul Bellar, was arrested in Columbia. He was extradited to Michigan last week.

The FBI affidavit refers to Croft’s discussions with a group of individuals Croft calls the “Chris Hill bunch.” Croft had been coordinating further violent action with this group. The affidavit further explains:

“The FBI believes that the Chris Hill bunch refers to individuals associated with Christopher Hill, the leader of the Georgia Security Force Three Percent militia.”

Christopher Hill is known as “General Blood Agent” within the Three Percenter movement and is referred to as “de facto leader of the national coalition of state militia groups” in one recent article in the far-right press. Hill is a former marine. A 2016 New York Times article features Hill and the Georgia Security Force Three Percent group, noting that his group “holds FTX sessions”—the same term used by the militia in Michigan for military-style exercises.

The article notes: “Firearms are central to their identities. In September, some Georgia Security Force members paraded with guns while protesting plans for a local mosque; one wore a T-shirt that read, ‘Islam Is of the Devil.’ Last year, armed Security Force militiamen rallied in support of the Confederate battle flag … Mr. Hill asked who was voting for Mr. Trump. Everyone shouted a unanimous ‘Oorah!’”

The article quotes Hill speaking about the prospect of a Democratic election victory: “If the people decide they can no longer suffer the inequities, I’d be with the people and I’d take my guns up to Washington, D.C.”

The Trump campaign is intensifying its provocative appeals to fascist groups. The president will speak Friday in Waterford Township, Michigan, where one of the fascist militiamen lived.

Donald Trump Jr. will speak this weekend at Williams Gun Sight Company in Davison, Michigan. The gun range, like Huron Valley Guns in Wixom, Michigan, is a far-right gathering point with close ties to local police and sheriffs.

In Minnesota, the Minneapolis police union appealed to retired police officers to serve as Trump’s “eyes and ears” on Election Day, an open appeal to suppress the vote.

According to an email sent by Willingham to Kroll, “We just want people who won’t be afraid in rough neighborhoods or intimidating situations.” Kroll appeared on stage with Trump during a rally in Minnesota last year. The WSWS recently reported on efforts by an unknown “consortium” of businesses to hire armed assassins to descend on polling booths in the state.

The Democratic Party has continued to maintain silence on these developments. Their greatest fear is that any reference to Trump’s plot to use police and fascist forces to exterminate opponents and steal the election will trigger broad popular opposition.