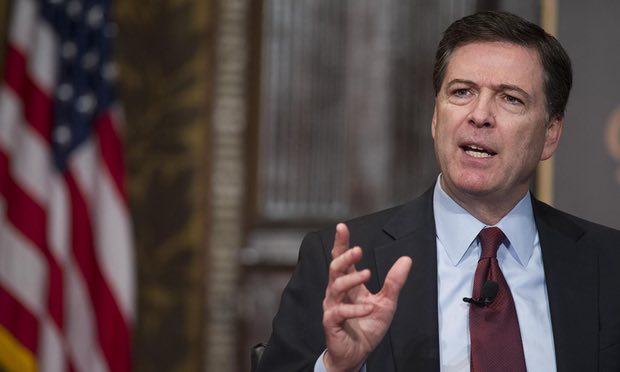 Note: We are publishing the two-year old article now to remind people that James Comey as director of the FBI undermined people’s privacy and used the powers of the Patriot Act to gather a lot of information on people in the United States. With the firing of Comey by Donald Trump, a lot of people seem to forget who James Comey is and what kind of FBI head he was. This is a reminder for people caught up n the Trump firing Comey scandal to keep their heads about the former FBI director. KZ

As lawmakers and security agencies braced for a potential loss of the heart of the Patriot Act, a long-delayed Justice Department report showed that the FBI uses the surveillance authorities it provides for “large collections” of Americans’ internet records.

Section 215 of the Patriot Act permits the FBI to collect business records, such as medical, educational and tax information or other “tangible things” relevant to an ongoing counter–terrorism or espionage investigation. Since 2006, the NSA had also secretly used it to collect US phone data in bulk.

After Edward Snowden’s leaks allowed the Guardian to reveal the phone-records bulk collection in June 2013, deep political opposition coalesced around the bulk program – eclipsing the FBI’s acquisition of other data, which has long been an issue only for civil libertarians.

But a Justice Department inspector general’s report finally released on Thursday covering the FBI’s use of Section 215 from 2007 to 2009 found that the bureau is using the business-records authority “to obtain large collections of metadata”, such as “electronic communication transactional information”.

The specifics of that collection – which civil libertarians have called “bulky”, to signal that it is not bulk collection but not far off – are not provided in the redacted report. Yet electronic communication transactional information is likely to refer to records of emails, instant messages, texts and perhaps Internet Protocol addresses. Sections of the report refer to the FBI asking for “material related to internet activity” and mention “IP addresses and to/from entries in emails”.

The inspector general found that the FBI received from the Fisa court 51 orders for such data between 2007 and 2009, compared with 32 orders issued from the Patriot Act’s 2001 inception until 2006. An unrevealed fraction of those post-2007 orders include the NSA’s requests for bulk phone data every 90 days. Cybersecurity investigations were a growing category of the orders by 2009.

Additionally, the inspector general has outstanding questions about FBI procedures to obscure and destroy information about Americans obtained by the bureau and not related to terrorism or espionage.

While the FBI director, James Comey, stated on Wednesday that losing the Section 215 authority would be a “big problem”, the inspector general cast doubt on the overall security impact of the loss.

“[T]he agents we interviewed did not identify any major case developments that resulted from use of the records obtained in response to Section 215 orders, but told us that the material produced pursuant to Section 215 orders was valuable in that it was used to support other investigative requests, develop investigative leads, and corroborate other information,” the DoJ report found.

Privacy advocates seized on the report to argue, echoing Senator Rand Paul in his Wednesday filibuster, that the time has come to abandon all of Section 215, not just the bulk collection provision that a federal appeals court has already deemed illegal.

“This report adds to the mounting evidence that Section 215 has done little to protect Americans and should be put to rest. As Congress debates whether to rein in the NSA, this investigation underscores how sweeping the government’s surveillance programs are and how essential systemic reform is right now,” said Alex Abdo, an attorney with the American Civil Liberties Union.

Daniel Schuman of Demand Progress urged Congress to let the provision “fade into the sunset”, and warned that the administration-backed USA Freedom Act, which ends bulk collection while preserving the rest of Section 215, was a pathway to future abuse.

“The well-intentioned USA Freedom bill, which would prop up some zombified provisions of the USA Patriot Act to menace our privacy in the future, should give way to a comprehensive review and reform of the intelligence community,” Schuman said.