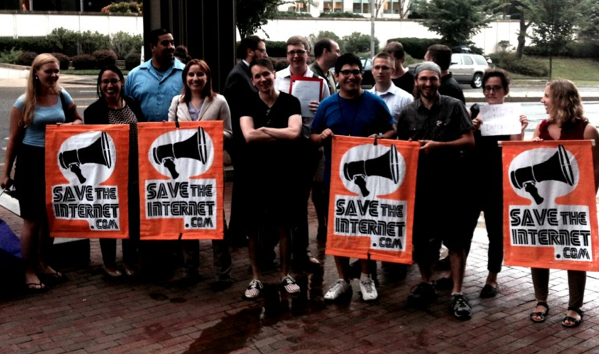 So many people inundated the FCC’s electronic filing system with comments about Chairman Tom Wheeler’s pay-to-play Internet proposal that the site crashed this morning.

But that didn’t faze advocates of an open and nondiscriminatory Internet. This afternoon, dozens of representatives from groups including Free Press, the ACLU, Common Cause, Demand Progress, MAG-Net, the Media Mobilizing Project and reddit went to the FCC to hand-deliver hundreds of thousands of comments from their members.

Groups also delivered comments from the Center for Media Justice, CREDO, Daily Kos, the Electronic Frontier Foundation, Engine Advocacy, Fight for the Future, MoveOn, Mozilla, OpenMedia International, Popular Resistance and Voices for Internet Freedom. Folks carried huge stacks of papers into the FCC while others held “Save the Internet” signs outside as agency staff filed the comments.

Initial comments were supposed to be due by midnight tonight. But thanks to the influx of comments today, the Commission has extended the deadline until midnight on Fri., July 18. Submit your comments here; we’ll make sure all of your feedback gets directly to the FCC.