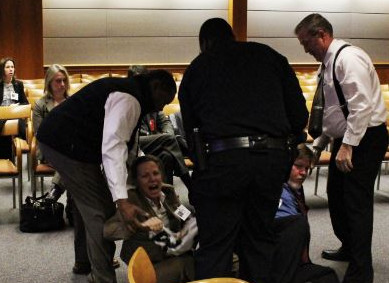 Fred Bucher, is head of the securities operation center at the FCC on the right after he tackled Margaret Flowers and Kevin Zeese and threw them to the ground.

Note: The officer, Fred Bucher, is head of the securities operation center at the FCC. He consistently is overly aggressive with protesters and has shown no respect for the First Amendment — Freedom of Speech, Press or Assembly. He bans people for life from entering the FCC merely for minor nonviolent protests. In one such situation he tackled both me and Margaret Flowers. In the hallway he said he would tell the police we assaulted him when in fact he assaulted us.

At a protest we held a few days ago, where we destroyed a trashcan full of computers and related equipment on a public sidewalk in front of the the FCC to protest Pai’s plan to destroy a free and open Internet. See video here. He tried to get Homeland Security to arrest us for property destruction — get it, the destruction of our own property!

Chairman Pai needs to take action to control Bucher. He is going to do serious damage to somebody some day. We will share this article with Pai so people should know he has been put on notice about the dangerous and dishonest activities of his head of security. Frankly, it is obvious this is deeply ingrained in his personality and a reprimand will not be enough. This is someone who should not have the power he wields. He needs to be removed from this position and put behind a desk where he has no contact with the public. KZ

Security guards at the Federal Communications Commission headquarters here manhandled a well-regarded reporter at a public hearing today and forced him to leave the premises after he had tried to politely ask questions of FCC commissioners.

The reporter, John M. Donnelly of CQ Roll Call, is an award-winning journalist. He is also chairman of the National Press Club’s Press Freedom Team and president of the Military Reporters & Editors association. He has chaired the NPC Board of Governors and formerly served on the Standing Committee of Correspondents in the U.S. Congress, which credentials the Washington press corps.

Donnelly said he ran afoul of plainclothes security personnel at the FCC when he tried to ask commissioners questions when they were not in front of the podium at a scheduled press conference.

Throughout the FCC meeting, the security guards had shadowed Donnelly as if he were a security threat, he said, even though he continuously displayed his congressional press pass and held a tape recorder and notepad. They even waited for him outside the men’s room at one point.

When Donnelly strolled in an unthreatening way toward FCC Commissioner Michael O’Rielly to pose a question, two guards pinned Donnelly against the wall with the backs of their bodies until O’Rielly had passed. O’Rielly witnessed this and continued walking.

One of the guards, Frederick Bucher, asked Donnelly why he had not posed his question during the press conference. Then Bucher proceeded to force Donnelly to leave the building entirely under implied threat of force.

Bucher has been implicated in at least one other incident involving harassment of a journalist. Bloomberg News reporter Todd Shields told Donnelly today that Bucher took his (Shields’) press badge last July when Shields was talking to a protester at an FCC meeting. The agency later apologized and said it restored Shields’ credentials.

“I could not have been less threatening or more polite,” Donnelly said of today’s encounter. “There is no justification for using force in such a situation.”

“Donnelly was doing his job and doing it with his characteristic civility,” said NPC President Jeff Ballou. “Reporters can ask questions in any area of a public building that is not marked off as restricted to them. Officials who are fielding the questions don’t have to answer. But it is completely unacceptable to physically restrain a reporter who has done nothing wrong or force him or her to leave a public building as if a crime had been committed.”

“The FCC and other government buildings are paid for by U.S. tax dollars, and officials who work there are accountable to the public through its representatives in the media,” Cochran said. “The FCC should apologize for this incident and ensure that their guards are trained to respect the right of journalists to cover FCC public events. In other words: hands off reporters!”