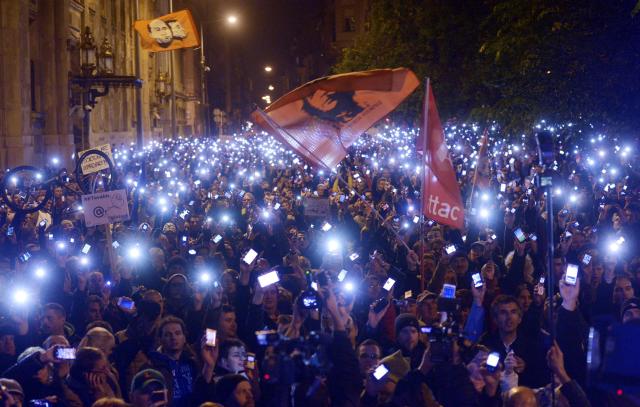 Stop The FCC From Compromising On Net Neutrality!

Now Is The Time To Take Action To Save The Internet: Here’s The Plan

This is it. The FCC is finalizing its net neutrality proposal right now and it’s still not clear whether they’ll listen to the public or try to push a fake plan that leaves the door open for cable company censorship and abuse.

We have the next few weeks to show President Obama, the FCC, and the world that people who care about the Internet will accept nothing less than lasting net neutrality through Title II reclassification.

We have come so far since we learned at the end of April that the FCC was preparing to propose rules that would allow the Giant Telecoms like AT&T, Comcast and Verizon to create fast lanes for those who can pay more. This would kill net neutrality.

We understood that if we lost net neutrality – over time our ability to share information through social media, reach the public with our websites and organize online would diminish. The Internet would become like corporate media. It would change from the open and free platform for the exchange of information and ideas that it currently is to a controlled and censored platform that decides what you can see and share.

The people have spoken loudly and clearly – through millions of phone calls, emails, petitions and public comments, an occupation outside the FCC and actions from coast to coast we, the people, forced consideration of reclassification of the Internet under Title II so that it would be treated as a public good onto the table.

This public outcry for net neutrality is unprecedented and it shows how much people want the Internet to be free of discrimination with equal access for all.

If there is anything less than full reclassification, the Giant Telecoms will find cracks that allow them to create a fee-based, tiered Internet that is discriminatory. There can be no compromise on Title II!

We must pressure the FCC now to listen to the people and fully reclassify the Internet. It’s up to you now to push this over the edge. We will do this together.

Sign up here to pledge to take action to save the Internet!

Here is how we are going to win Net Neutrality

1. Join the Emergency Mobilization on Thursday, November 6 at the White House in Washington, DC. We’ll meet at Lafayette Park at 6 PM. Bring your cell phone. If you aren’t in the DC area, find another action near you using the map below. To add your own action to the map, click here.

Take Action In Your City, Community, School. If you can’t make it to DC, then hold a cell phone protest at an FCC office near you or at one of the Giant Telecoms or in your town square or campus quad. Tweet photos of your protest using #RealNetNeutrality #FullReclassification. We need to show a national revolt to protect the future of the Internet.

2. Call the FCC. Our partner, Fight for the Future, is organizing a tidal wave of phone calls to  the FCC every day and it’s working. It only takes a few minutes. Click here for more details. Swamp the FCC with calls, show them the future of the Internet is something we take seriously.

3. Show that #OurVoicesMatter. Recent events, like police abuse all across the country, especially in Ferguson, MO, and the brutal militarized police response when the communities protested, were made more visible because of social media. Research by Pew shows that “Overall, 73% of African American internet users—and 96% of those ages 18-29—use a social networking site of some kind.” But the NAACP, funded by AT&T, came out on the wrong side of net neutrality. We need to counteract that by showing that people of all colors deserve to be seen and heard. The citizens media provides a counterbalance to the corporate media, don’t let the FCC take that away.

Send us a photo or video of you holding a sign that says “#OurVoicesMatter, #RealNetNeutrality.” Submit your photo here.

This campaign is going to be escalating so watch for more information on Popular Resistance and sign the pledge above to receive updates.

Equal access to the Internet without discrimination impacts every issue we work on.

Join us to ensure Internet freedom.