FCC To Kill Net Neutrality Unless We #StopTheVote

On December 14, Verizon lawyer Ajit Pai, who is currently serving as chair of the Federal Communications Commission, FCC, will bring his proposal to dismantle net neutrality for a vote. There are two other commissioners who support Pai’s plan, and two who oppose it, so it will pass unless we take action to save net neutrality now.

We faced long odds before and prevailed. In 2014, FCC Chairman Tom Wheeler proposed rules that would create a tiered Internet. In a short time, the actions of many pushed Wheeler to include reclassifying the Internet as a common carrier (like a public utility) so that net neutrality would be protected. Then, a sustained campaign for the next nine months swayed three commissioners to vote for reclassification. We won, beating the millions of dollars that telecoms used to try to stop us. 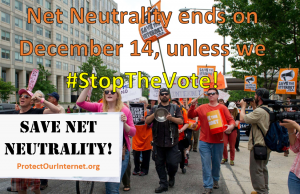 Now, we must act again.

It is no surprise that Pai decided to kill net neutrality in mid-December. This is the time of year when Washington does its worst dirty work because people are distracted with holiday shopping and parties.

We must prove that we are watching and that we won’t let net neutrality die. The momentum to stop the vote is rising, let’s keep building it!

Here are actions you can take:

1. Contact Congress – Pai is hellbent on ending net neutrality because he knows that the profits for Verizon, Comcast and AT&T will be huge. The Internet will become like cable TV where the telecoms can charge you more to access certain content. But members of Congress can intervene to call on Pai to back down.

2. Join the National Day of Action – On December 7, a week before the vote, hundreds of protests are planned at Verizon stores across the country. Click on the link below to find an action near you or to plan your own.

3. Stop the Vote Action at the FCC – On December 13, at 4:00 pm, we will gather at the FCC in Washington, DC and we are staying through the night and into the morning to stop the vote. Join us for part or all of the vigil. We’ll project messages on the FCC, bring our giant telephone to remind folks to contact Congress and we’ll plan to peacefully stop the vote from happening.

If you can make it, register below so that we can be in touch with you about the details.

If you can’t make it, plan a vigil of your own. Contact us at info@popularresistance.org with the details and we’ll post it so that others can find you. Good places to vigil are members of Congress’ offices, Verizon stores, FCC regional offices or highly trafficked public spaces.

And if you can come early, there will be a protest from 10 am to 2 pm. See March For Net Neutrality for details. 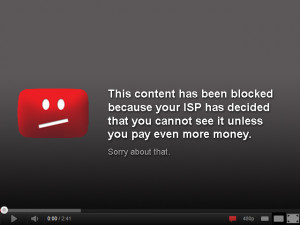 Internet rights are civil rights. Net neutrality is more than choosing your favorite streaming service – it is about the freedom to access the information and conversations that advance movements, expand opportunities and strengthen our communities. With an open internet, all people in the United States can:

Big cable companies like Comcast and Verizon are looking out for their bottom line, not our ability to organize, communicate and express ourselves — that’s why we’re giving it our all to fight again for the internet as we know it.