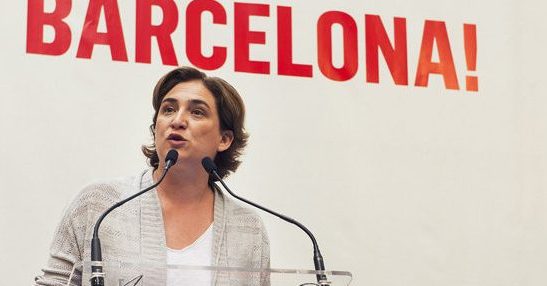 Fearless Cities: A Guide To The Global Municipalist Movement

Above: Ada Colau, the former mayor of Barcelona.

Four years ago, Barcelona voters made international news when they chose Ada Colau, a young feminist and housing rights activist, to be mayor of Spain’s second largest city. Colau was backed by Barcelona En Comu, a social movement coalition opposed to gentrification, eviction of tenants, privatization of city services, and growing inequality between neighborhoods. 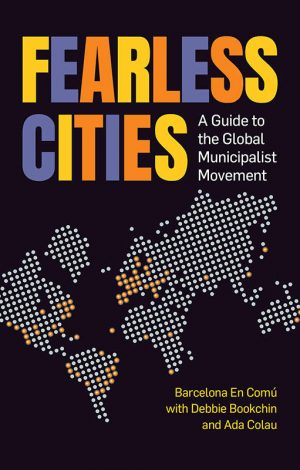 Last month, Colau lost her re-election fight by just a few thousand votes to a candidate backed by Catalan separatists. But En Comu held onto its ten city council seats and will remain a force in local politics. And, thanks to the recent publication of Fearless Cities: A Guide to the Global Municipalist Movement (New Internationalist Publications, 2019) the organizational model and radical platform of En Comu will continue to be a source of cross-border inspiration.

In their contribution to the Guide, researcher Manuela Zechner, Kate Shea Baird from En Comu, and Claudio Delso, a leader of Marea Atlantica in the Spanish city of A Coruna, stress the importance of using a “transparent, horizontal, and democratic process” when “building municipalist platforms.” By that, they mean that organizers should develop a political program, responsive to local needs and aspirations, before recruiting candidates and doing electoral campaigning that will inevitably end up focusing on individual personalities.

“The best way to engage people,” they argue,” particularly, those with no previous interest in electoral politics, is to go and ask them what they think about their neighborhood, about how they would change it. Focusing on shared goals, rather than potentially divisive negotiations over who should stand as a candidate, is also a good way to bring people from diverse backgrounds and from different organizations together and to create a sense of common purpose.”

The City We Want

In Belo Horizonte, a city of 2.5 million in Brazil, social movement activists prepared to field a first-time slate of candidates for city council in 2016 by canvassing in parks, squares, schools, and other public spaces. There, they collected “ideas from residents about city issues, from pollution to urban violence.” The resulting “Manifesto for the City We Want” became the basis for a coordinated electoral campaign by a 12-member slate that included many women, people of color, and youth, plus Belo Horizonte’s first indigenous and transsexual candidates. Their slogan: “A vote for one is a vote for all.”

Aided by a “vital internet presence” and a volunteer army, that included artists, musicians, and “biketivists” equipped with loudspeakers, who cycled around the city spreading the message of  Muitas pela Cidade que Queremos,  two Muitas candidates won municipal council seats. One of them, Aurea Carolina, received more votes for that position than anyone in city history.

Fearless Cities features many case studies of other “municipalist organizations” and their experience contesting for power in urban settings, both large and smaller-scale. Among the groups mentioned are the Richmond Progressive Alliance from Richmond CA. and Cooperation Jackson from Jackson, Miss.  Both sent representatives to a “Fearless Cities” conference hosted by Mayor Colau two years ago.

Since that gathering of 700 people, Barcelona En Comu has not only helped to govern a city of 1.6 million but continued to forge solidarity relationships with like-minded activists in other countries who also trying “to imagine alternatives for their own city or town.” In a further expression of this international spirit, Colau supporters welcomed 100 campaign volunteers from other parts of Spain and overseas last month, invoking “the proud history of defenders of democracy coming to Barcelona to fight racism during the Spanish Civil War.” The mission of this new “BrigAda,” was “building community and sharing the message to people in Barcelona that voting for Ada Colau and Barcelona en Comu is important not only for this city but also for Europe and the world.”

In her epilogue to the book, Colau recalls that “we began our adventure [in Barcelona] having been inspired by struggles, following the economic crisis, against the dismantling of the education system, against the cuts to healthcare and the public sector in general.” As a result of successful electoral campaigns, people, like herself, “who had never governed a city, who had done politics from social movements, NGOs, or neighborhood associations” found themselves “inside municipal institutions.” En Como, in particular, has tried to “build bridges between municipal politics and new forms of political action by citizens, from different walks of life to defy the established order that is profoundly unjust.”

In the U.S., would-be “Fearless cities” find themselves on the frontlines of resistance to Trump and faced with bi-partisan efforts to limit progressive policy making through state “preemption.”. In states where conservative Republican governors or legislators are dominant, they’ve tried to impose legal curbs on local minimum wage hikes or mandated paid family leave or sick days. Meanwhile, in Democrat-run California, the state legislature last year bowed to Big Soda and voted to prevent Richmond and other revenue-starved cities from enacting new soda taxes (for the next 12 years!).

In red or blue states, the task of building a durable political organization, at the local level, involves a lot more than just running left-leaning candidates, on a progressive platform, every two or four years. For them to succeed in office—and remain accountable to the constituencies that elected them—these office-holders need to be part of broader municipal reform groups or socialist organizations that are membership-based and continuously engaged in multi-issue, non-electoral organizing. And they must be ready to fend off corporate counter-attacks like the current Seattle business community campaign to prevent socialist City Council member Kshama Sawant from being re-elected.

Anyone involved in municipal politics and related community organizing will find Fearless Cities to be a very useful guide to winning office, holding onto it, and making change in the process.

Steve Early is a member of the Richmond Progressive Alliance. A longtime labor activist, he is the author, most recently, of Refinery Town: Big Oil, Big Money, and the Remaking of an American City. He can be reached at Lsupport@aol.com.