Above Photo: Demonstrators assemble in front of Douglass Homes on Friday to protest HABC’s failure to hold a tenants council election. (Mark Reutter)

Beyond the immediate anxiety public housing residents in East Baltimore express about the closing of the Pleasant View Day Care Center is a deeper distress about the pattern many say it represents:

The city is letting private developers and non-profits determine the future of their shelter and social services.

Especially in the Oldtown district east of downtown, between Little Italy and the Johns Hopkins Medical Complex, a large concentration of aging public housing has been targeted for renovations to attract mixed-income families.

Current residents fear that under this process of “upgrading” they will be forced out of their homes in a Baltimore-style version of the gentrification that has swept through Washington, D.C., Brooklyn, Manhattan and other urban areas with once-large black populations.
___________________________________
• CITY HALL PROTEST TODAY. At 2 p.m., parents and allies of the Pleasant View Day Care Center will picket in front of City Hall, protesting what they call a “$1/year backroom deal” between the Housing Authority and Living Classrooms that resulted in the day care center’s closing.

• For more: Parents protest shutdown of day care center by Living Classrooms.
__________________________________
“The propaganda is being put out that these people want to move to the county,” says Tyrone W. Bost, who heads a coalition of contractors and small business owners called HOMES (Homeownership Opportunity and Mentorship for Economic Success).

One of the biggest problems facing the poor in Baltimore, as Bost sees it, is “gentrification and giveaways to a select few investors and absentee landlords.”

A retired Army reservist who did two tours of duty in Iraq, he gives this analogy:

“When I was overseas, I saw two types of oppression. You had refugees, which are people from other countries who had their houses destroyed, and you had internally displaced persons – same thing, but they were in the same country. People here are being internally displaced by force and circumstance.”

Bost was speaking during a demonstration last Friday, where about 40 people stood outside the rental office of Douglass Homes in the drizzle, saying they were not getting any say in tenant matters. 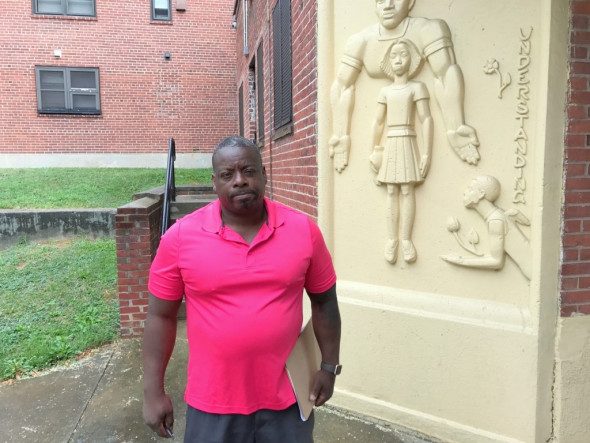 Tyrone W. Bost says gentrification and “giveaways to a select few” have led to a scarcity of decent, affordable housing in the city. (Mark Reutter)

Tania Baker, communications director for the Housing Authority of Baltimore City (HABC), said her office would need time to answer questions from The Brew about the complaints by the group.

As of this morning – four days after our request – neither she nor HABC’s new director, Janet Abrahams, has responded. 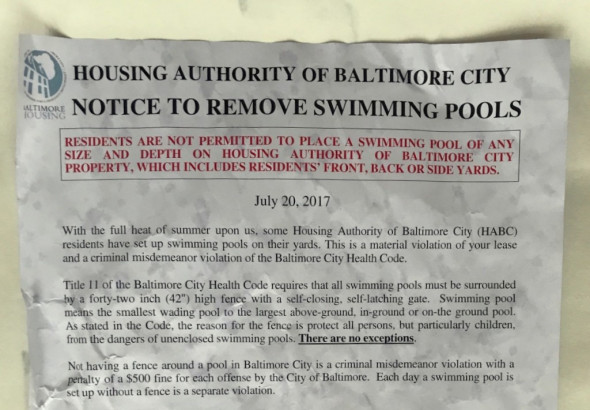 It may be stiflingly hot in the projects, but don’t dare let your kids splash in a wading pool. “RESIDENTS ARE NOT PERMITTED TO PLACE A SWIMMING POOL OF ANY SIZE AND DEPTH ON . . . RESIDENTS’ FRONT, BACK OR SIDE YARDS,” warns this July 20 notice. (Mark Reutter)

Lifford said she had worked on and off at the center for 18 years before her job was terminated on Friday. Her three children “grew up” at the center – two of them now college-bound – and her granddaughter also attended.

“It’s a land grab, plain and simple” was Lifford’s assessment of Living Classrooms’ decision to terminate the day care center’s lease. “The city gave it to them, and they decided we ain’t good enough for them.”

The 16,000-square-foot building was opened as a day care center in 1999. In 2015, the Housing Authority leased the building to Living Classrooms for 21 years, at an annual rent of $1. The building is currently assessed by the state at $1.97 million, but Living Classrooms does not pay property taxes because it is still owned by HABC.

The non-profit says it intends to replace the day care center with a state-of-the-art Head Start program run by the YMCA of Central Maryland.

The new program is scheduled to open sometime in September after Living Classrooms undertakes extensive renovations.

Offering day care to public housing residents was a key component of Mayor Kurt Schmoke’s attempt to break the cycle of poverty in “the projects” 25 years ago.Schmoke’s Day Care Strategy

The resulting 18-acre Pleasant View Gardens was anchored by a recreation building and community center on East Fayette Street.

The latter became the home of the Pleasant View Day Care Center, designed as a safe haven for young children as their parents entered the workforce or enrolled in job training programs. The center, open from 7 a.m. to 6 p.m., also offered before- and after-school care for older kids.

Back in the Schmoke era, HABC operated a dozen day care centers for public housing residents. On the East Side, there were facilities available at Hollander Ridge, Somerset Homes, Latrobe Homes as well as Pleasant Gardens.

By 2010, however, HABC wanted to exit the field altogether. Thomas Hardnett and Sonya Jackson won the formal competition for the Pleasant View center, which required at least 50% enrollment for public housing children and also employing public housing residents as staff.

Anthony eventually parachuted out, and in came Living Classrooms, Aided by a $5 million grant by Kevin Plank’s Cupid Foundation, the non-profit refurbished the building – branded the UA House – with a turf field, yoga space, a recording studio and a neighborhood kitchen. 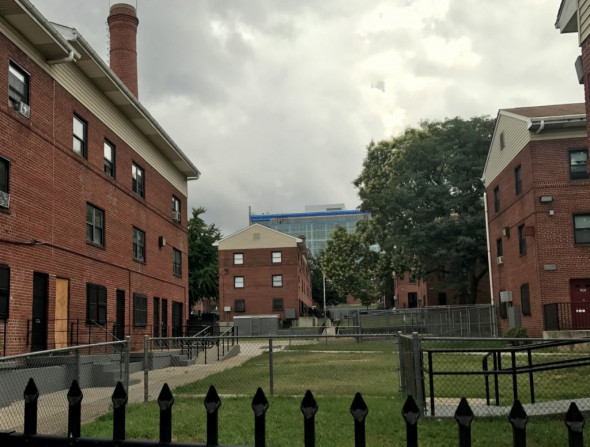 Boarded-up units at Douglass Homes are not being re-rented by HABC, residents say, despite the huge backlog of families seeking public housing. In the background: southwest corner of the Johns Hopkins Medical Complex (Mark Reutter)

Plank is not the only influential person who sits on Living Classrooms’ board of trustees. So does City Council President Bernard C. “Jack” Young and – before she left office last December – former Mayor Stephanie Rawlings-Blake.

In June, Hardnett and Jackson – told by Living Classrooms that their lease would be terminated in favor of a YMCA-run Head Start program – went to see Young.

“We didn’t think Living Classrooms had the right to terminate our lease because the building belongs to the city and our lease was signed with the Housing Authority,” Hardnett said.

“Young said he was just one vote on the board [of Living Classrooms], so he didn’t have much influence. He also said that if a mistake was made, it was made by the Housing Authority, not Living Classrooms. He recommended we go talk to the mayor.”

Mayor Catherine Pugh was in Miami attending a meeting of the U.S. Conference of Mayors, so Hardnett and Jackson put in a written request for an audience with her. “We filled out the form in the mayor’s office, and we have yet to get a response,” he said.

All of which led Hardnett to appeal to Robert Stokes, the councilman for the 12th district.

“I consider Robert a friend, so I left a message on his cell,” Hardnett said. “That was two weeks ago. I haven’t hear from him as well.”

Stokes hasn’t responded to The Brew’s request for comment. 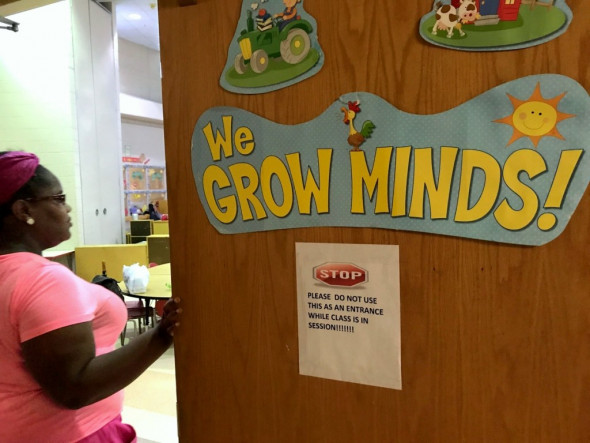 Briyana McIntire looks in on her two children, Brandon and Bra’maijah, last Friday before the Pleasant View Day Care Center was forced to close because Living Classrooms terminated its lease. (Mark Reutter)