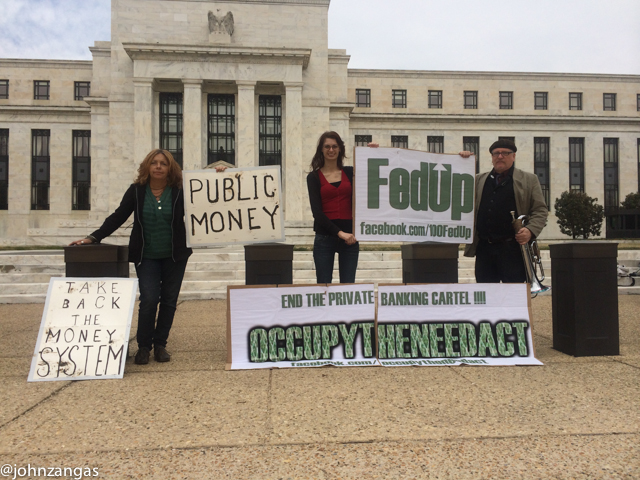 Fed Up With The Federal Reserve

A group of activists concerned with the continuing economic struggle of Americans held a sidewalk “conference” in front of Federal Reserve Board headquarters in Washington, DC on March 21 and 22. Their conference, called “Fed Up: The Peoples First Conference on Monetary Reform,” coincided with a European Central Bankers’ meeting to discuss international monetary policy. Occupying the sidewalk in front of the Federal Reserve, they spoke to passersby about the need to change U.S. economic policy and redistribute wealth.

Fed Up delegates claim the Federal Reserve is a “black box of decision-making,” responsible for policies that enrich banks with free money at the expense of millions who are economically strapped. Their message: “We need to take back the Federal Reserve, stop bailing out Wall Street and start rebuilding America.”

“The idea of economic independence is as important as political freedom and social justice,” said Jim Costanzo of the Aaron Burr Society. “You are not independent if you do not have economic independence,” he said. Costanzo believes the present economic problems stem from an accelerating wealth imbalance, facilitated by money that has been given to banks since the 2008 recession.

The group advocated the National Emergency Employment Defense Act or NEED Act (HR2990), which was introduced by Congressman Dennis Kucinich in 2011. The bill, they say, is designed to put money where it is needed: back into people’s pockets for jobs, education, healthcare and building infrastructure. Though the bill died in committee in 2013, it contains policy changes which the activists say should be adopted and will directly help those who continue to slide economically. The bill would re-locate the Federal Reserve within the U.S. Treasury Department to create a new public monetary authority, empower the U.S. Treasury to print money and cap interest rates at 8%.

The Federal Reserve has funded bond and mortgage-backed securities purchases, and since 2007 has increased its holdings by three trillion dollars while issuing money. The policy, known as quantitative easing (QE), was adopted to drive interest rates lower, increase bank lending rates to get more money into the economy, and create jobs. But there has been little economic relief for workers and only a marginal decrease in the unemployment rate. “Capitalism will never look at labor except as a liability,” said Costanzo.

Most of the four trillion dollars the federal reserve has bought in bond purchases will languish as debt in its coffers, exposing future generations to financial obligations for which they were not responsible. The Federal Reserve has accumulated three trillion in government debt since 2008 and converted it to money. While it has helped Wall Street stocks rise to record heights, it has done little to help the person on the street.  “We need to allow communities to have access to capital to form worker co-ops and food co-ops, just as corporations [have] access to capital,” said Costanzo.

Harrison Schultz, 31, who helped organized the Fed Up conference with his partner Lorna Shannon, believes the time to make change in the nation’s economic policy is needed now more than ever. Schultz, a sociology Ph.D. candidate at the New School for Social Research in Manhattan, contacted leaders from groups around the country to educate others and share their message. “We are here to talk about money issues, the relationship between the Federal Reserve and the banks,” he said. “The Needs Act is a possible solution to our money problems,” he said. “It will allow us to take control over Congress instead of Wall Street controlling Congress.”

Schultz, who has over $300,000 in education loans, is no stranger to economic struggle. Unable to find adequate employment, he works as a Dating Coach, helping singles with compatibility tips. He shares a one-bedroom studio with his partner, Lorna Shannon, in Williamsbridge, Brooklyn. She was a pre-school teacher but is now unemployed. She has several thousand dollars in medical debt and no money saved. At 29, she feels the pressure of an economy that has no stake in them. “This system is inhumane,” she said. “This is a system that exploits everyone. It doesn’t work for me or my friends. It’s making things worse.” They have no health insurance or benefits or retirement either, and barely make enough to pay rent, utilities and food bills.

Schultz and Shannon are among a growing population of disenfranchised youth who feel the effects of growing pressures to get ahead yet are left behind. Shultz is among many educated youth who have debt they may never be able to pay off because employment opportunities are scarce. There is over one trillion dollars in outstanding student debt in the U.S.

Their plight is reflective of the fact that U.S. wealth inequality is greatly skewed towards the top one percent, which owns 40 percent of the wealth, while the bottom 80% owns only 7% of the country’s wealth. And it is getting worse. Meanwhile the U.S. ranks fourth to last of all 34 developed countries in income inequality according to the Organization for Economic Cooperation and Development (OECD). Income inequality is rising in every country according to OECD.

Wealth inequality may have even more dire consequences than previously thought. A recent NASA study theorizes that wealth inequality actually poses a threat to civilization. In one potential scenario, excessive resource consumption by elites will exacerbated economic woes of the majority to such an extent that the study warns it will precipitate civilizational collapse.

Costanzo offered several solutions to wealth inequality in addition to the NEED Act. He believes that the tax breaks corporations get are unfair to the communities which welcome them. “Every corporation is getting subsidized, so it is hard to get small businesses started,” he said. “Corporations like Walmart get to build stores in communities and get tax free incentives.”

Costanzo has also been involved with “Strike Debt,” a grassroots organization which bought back medical debt from creditors by raising money in a telethon. “We raised $700,000 which we used to buy back $14 million in debt for pennies on the dollar,” he said. “We abolished the medical and education debt of people who would never have been able to pay it off.”

Shannon offered several other solutions to help the working class, including funding for food and child care co-ops, something which could be provided through the NEED Act. As people lose faith in the viability of the dollar, some communities have established local currencies. A cooperative in Ithaca, New York set up an alternative currency called “Ithaca Hours.” Over 900 local businesses in Ithaca use the currency in place of the dollar to exchange goods and services. “It only circulates in the local community, keeping business profits local,” she said.

Shultz and Shannon feel their first conference at the Federal Reserve was a success as they reached out to hundreds of people and shared information and ideas between themselves. “This is the beginning of something new,” said Shultz. They plan to hold another conference during  Wave of Action events in New York on April 4.