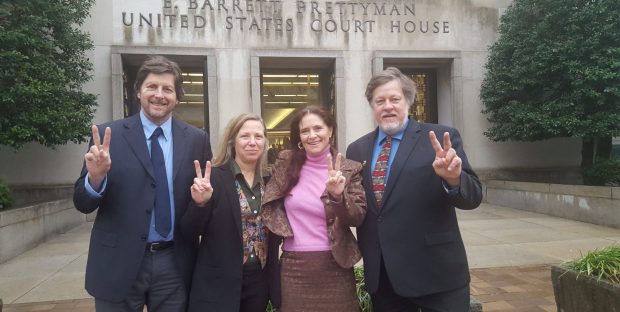 Above photo: Left to right – David Paul, Adrienne Pine, Margaret Flowers and Kevin Zeese outside the courthouse prior to the February trial.

Work to Oppose US Imperialism and Build International Solidarity Continues.

Washington, DC – The federal charge of “interfering with certain protective functions” levied against four members of the Embassy Protection Collective was formally dropped today in a hearing before Chief Judge Beryl A. Howell in US District Court. The four defendants are Adrienne Pine, David Paul, Kevin Zeese and Margaret Flowers. They were arrested on May 16 2019 when federal police raided the Venezuelan Embassy in violation of the Vienna Convention, which requires host countries to protect embassies and restricts them from entering without permission from the sovereign government.

Judge Howell sentenced the Embassy Protective Collective to no jail time. After a jury refused to convict them in early February, resulting in a mistrial, the prosecutors offered to drop the federal charge and substitute one of most minor local misdemeanor charges in the DC Code, incommoding, basically causing a disturbance. The protectors were facing a potential year in jail and $100,000 fine each. They are now on six months of probation.

The four protectors were in the Venezuelan Embassy in Washington DC for over a month last spring with the permission of the elected, constitutional government of Venezuela, which is recognized by the United Nations and over 130 countries. The United States was attempting to overthrow the democratically elected Venezuelan government. When that failed, it took the unprecedented step of recognizing the then-president of the National Assembly, Juan Guaido, as president and handing Venezuela’s assets in the United States over to him. All of this violates international law.

The Embassy Protection Collective formed in April 2019 to stop the US government from illegally giving Venezuela’s main embassy in the United States to Guaido’s supporters. Guaido’s political party has little support within Venezuela and was behind violent protests in 2014 and 2017 that killed over 140 Venezuelans. Venezuelan Foreign Minister Jorge Arreaza and other members of the elected government, including President Maduro, expressed their full support for the US peace activists. Many social movements within Venezuela also expressed solidarity with the protectors.

The protectors remained inside the embassy without incident until April 30 when the United States once again attempted and failed to execute a coup. On that day, regime change actors working with the US State Department and Juan Guaido’s “ambassador” Carlos Vecchio placed the embassy under siege, assaulting protectors, damaging and breaking into the embassy and preventing food and supplies from being delivered. Over the following 16 days, the number of protectors inside dwindled from roughly 80 people to four to conserve food, especially after power and water were illegally cut off around May 9. The four were the last protectors inside when the US government made the decision to conduct a SWAT-style raid.

Today’s sentence marks yet another victory in the effort to protect the Venezuelan Embassy. The Embassy Protection Collective broke through the blockade and got supplies to the people inside; the people inside prevented the coup supporters from staying in the embassy; the embassy was not turned over to Guaido—it remains empty today—and now the federal charges have been dropped.

The United States continues to threaten the Venezuelan people using tactics illegal under international law. In recent months, the economic war has been heightened and the President and other members of the Venezuelan government are facing bogus drug trafficking charges by the US Department of Justice. According to the DEA, Venezuela is a minor transhipment point for drugs while countries allied with the United States like Colombia and Honduras are major drug trafficking states. The US has put a bounty on Venezuelan officials, the US Navy is surrounding Venezuela’s coast and US soldiers have been sent to the Venezuelan border within Colombia and US-backed mercenaries have tried to enter Venezuela to kidnap or assassinate the President. None of this has deterred the Venezuelan people from defending their sovereignty and the revolutionary Bolivarian process.

The Embassy Protection Collective is planning to host a webinar featuring social movement leaders from Venezuela in an effort to build international solidarity and opposition to US imperialism. The protectors share a vision with Venezuelans and many people around the world of a future based on peace between countries, international cooperation and respect for international law. The US activists hope their government will end its sanctions, blockade and aggression toward Venezuela and all countries being targeted and join in the spirit of international cooperation that prevails in this time of a global pandemic, recession and climate crisis.

The four embassy protectors thank the many people in the US, Venezuela and around the world who supported them through the last year. They thank their defense committee for building that support and raising funds to pay legal fees. They thank their excellent legal team. And they affirm their solidarity with all who are resisting injustice and state violence both domestically and abroad.