Above Photo:  Jody Meche, president of the Louisiana Crawfish Producers Association-West in the path of the Bayou Bridge pipeline installation in the Atchafalaya Basin. Credit: All photos © Julie Dermansky

There was an eerie stillness along the route of the Bayou Bridge pipeline in Louisiana’s Atchafalaya Basin the day after a federal judge halted work on the pipeline. A temporary injunction was granted two weeks after groups opposed to the pipeline had their say in court, giving Energy Transfer Partners enough time to clear a path through the World Heritage site.

U.S. District Judge Shelly Dick wrote that she was enjoining further work on the pipeline in the basin “in order to prevent further irreparable harm until this matter can be tried on the merits.” She will release her reasoning for ordering ETP to stop construction in the coming days.

The Bayou Bridge pipeline will be the last leg of the Dakota Access, carrying oil fracked in North Dakota to Louisiana. The final stretch of the project, if built as proposed, will span 162.5 miles from Lake Charles to St. James, cutting through the Atchafalaya Basin, a national heritage area and the country’s largest swamp.

The lawsuit Earthjustice filed in federal court on January 11 against the U.S. Army Corps of Engineers on behalf of the Atchafalaya Basinkeeper, the Louisiana Crawfish Producers Association-West, Gulf Restoration Network, the Waterkeeper Alliance, and the Sierra Club, alleges that the Corps acted “arbitrarily and capriciously” when it issued a permit for the pipeline.

The plaintiffs were relieved by the judge’s ruling, and look forward to presenting their case in court, which they are confident will show cause to stop any new pipeline from being built until non-complaint companies fix existing problems.

I joined Jody Meche, president of the Louisiana Crawfish Producers Association-West, on a trip to the west side of the basin the day after the work stopped to see how far the construction of the pipeline had already gotten. The amount of damage done to the basin since construction began in mid January — and over the course of the two weeks it took for the judge to issue her decision — was breathtaking.

The pipeline route was filled with debris from pulverized cypress and tupelo trees. Dirt piles, some over 20 feet high, lined parts of the pipeline channel. And a swatch of trees up to 75 feet was cut along the part of the route we navigated along. 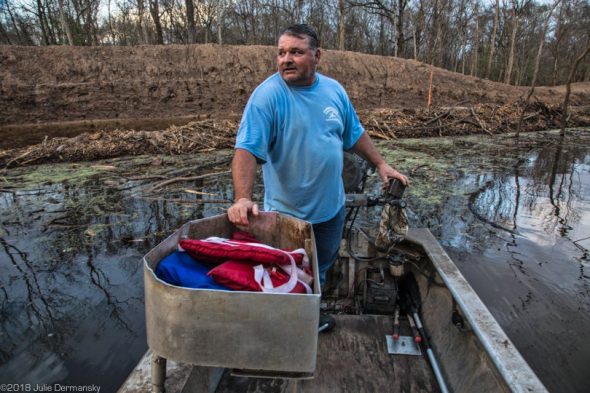 Mountain of dirt along the Bayou Bridge Pipeline route.

Though it is too late to save countless trees already cut down for the pipeline, Meche said it is still vital to stop the pipeline from being installed. Existing spoil banks created by trenched dirt that wasn’t put back where it was dug up during the construction of other pipelines, act as dams that stop the natural flow of water into the basin already. The spoil banks, which block water like a dam, will become permanent dams if the Bayou Bridge pipeline is built as planned.

“There are already miles of pipelines crisscrossing the basin that have decimated our water quality, creating hypoxic water that kills crawfish,” Meche said.

According to Earthjustice’s suit, companies have gotten away with breaking the law for decades, due to the Corps’ failure to enforce compliance.

“If we continue to let companies build new pipelines without fixing any of the problems already caused by other non-compliant projects, the basin may never recover,” Meche said.

We got out of his boat onto a spoil bank, where it is easy to see how water movement is already all but stopped along long stretches where the Bayou Bridge pipeline installation process began. 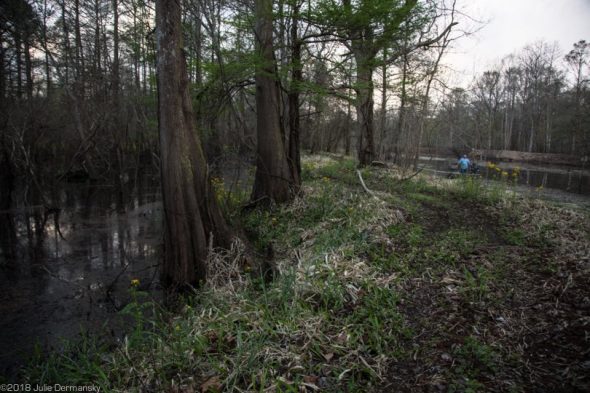 View from on top of a spoil bank next to the route of the Bayou Bridge pipeline. 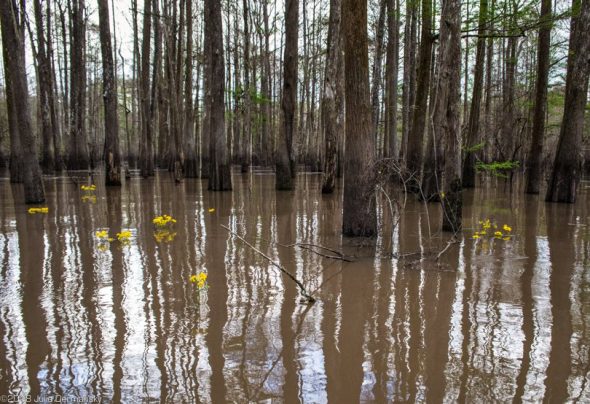 View of an area in the basin where there is more natural waterflow. 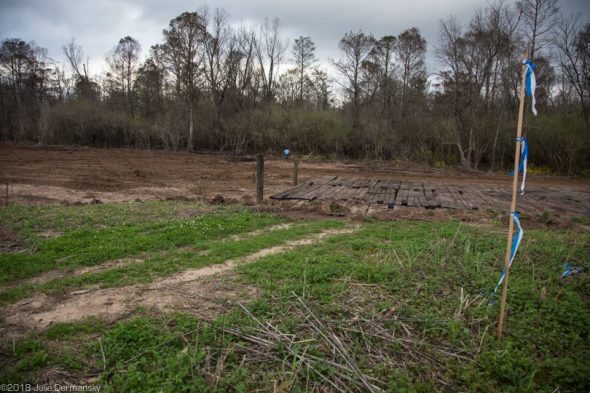 Jody Meche walking to the end of the right of way along the route of the pipeline which seems to be wider than 75 feet.

Meche guided his boat along new spoil banks that appeared to be over 20 feet high. With the water level set to rise, “these mountains of dirt will likely be washed away,” he pointed out.

Governor John Bel Edwards, who has endorsed the pipeline, did not issue a response to the judge’s ruling, but Shauna Sanford, a representative from his office, said she would try to get a statement for DeSmog in the coming week.

Energy Transfer Partners told the Baton Rouge Advocate it would comment after the judge released the explanation for her ruling. 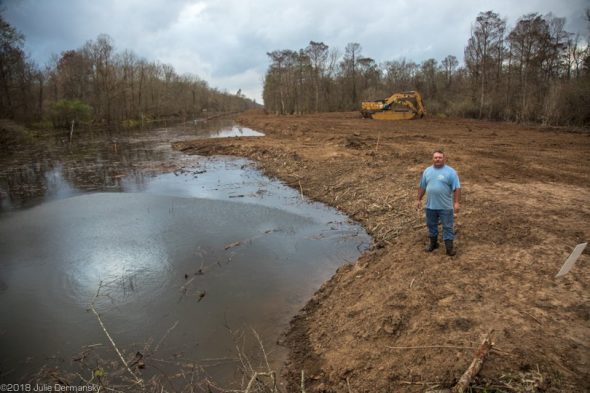 Swath of trees cleared along the route of the Bayou Bridge pipeline where work has now stopped. 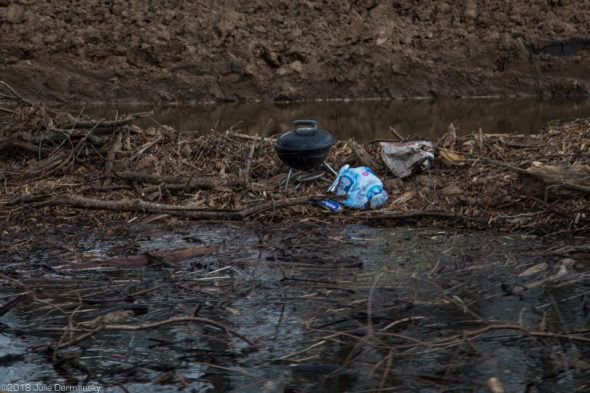 Barbeque and trash left where work was being done on the Bayou Bridge pipeline on Friday.

Construction on the rest of the pipeline is not stopped by the judge’s ruling — Earthjustice’s suit sought to stop only the pipeline portion that runs through the basin.

I asked Energy Transfer Partners by email whether the company would reroute the pipeline around the basin if the U.S.Army Corps loses its case, but did not receive a response. 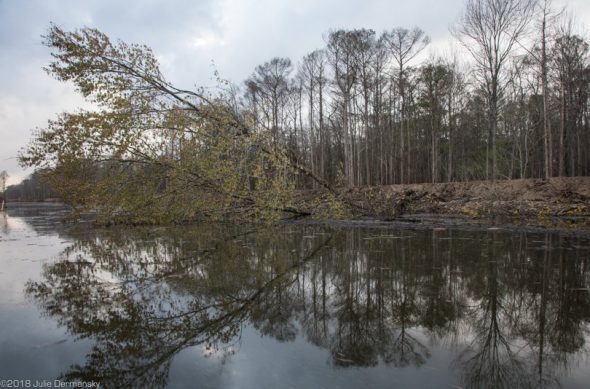 Tree on a spoil bank knocked over along the route of the Bayou Bridge Pipeline. 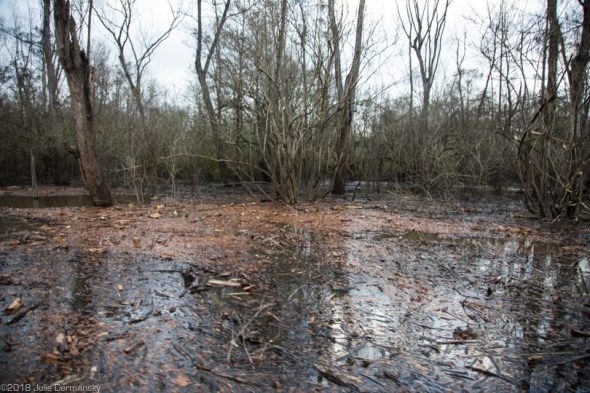 Chips from pulverized trees in the water near the route of the Bayou Bridge pipeline.