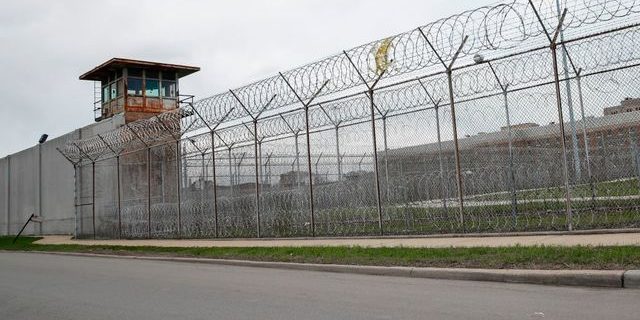 Above photo: The Cook County Department of Corrections (CCDOC) is seen in Chicago on April 9, 2020. Kamil Krzaczynski/AFP via Getty Images.

Phone Calls Are Now Free for More Than 225,000 People in Federal Prisons.

Advocates have long decried the high price of calls inside correctional facilities; concerns that were exacerbated once in-person visitation was banned amid the COVID-19 pandemic.

Now that in-person prison visits have been banned amid the coronavirus pandemic, the Federal Bureau of Prisons (BOP) announced plans to make prison phone and video calls free for incarcerated people, Politico reports.

Prison reform advocates have long condemned the unreasonably high prices predatory phone companies charge incarcerated people to make phone calls. Those concerns were exacerbated once the COVID-19 pandemic began tearing through prison populations across the country, making face-to-face visits impossible. Twelve Senators wrote a letter to the Department of Justice (DOJ) and the BOP, asking the agencies to cease burdening the 226,000 incarcerated people and their families with unnecessary fees, especially when their ability to maintain communication is now more urgent than ever.

The Federal Bureau of Prisons is making calling and video visitation free for inmates after the coronavirus forced a halt to in-person visits, the agency said in a letter to Congress obtained by Politico.

…“Video-visiting, which is available to our female population, was also made free on that same date,” Carvajal added. He also described efforts to allow inmates to confidentially communicate with legal counsel outside of the view of prison staff.

“For the past decade, predatory prison phone companies have raked in billions from families desperate to keep in contact with their loved ones,” said MediaJustice campaign director Myaisha Hayes in a statement. “In light of this global pandemic, in-person visitations have been dramatically reduced or suspended, forcing families to pay exorbitantly high prison phone rates to confirm the safety and well-being of their loved ones. This is exploitation and is unacceptable. It’s time for the FCC to finally step in and protect families.”

The BOP oversees 122 prisons throughout the U.S., according to Politico.