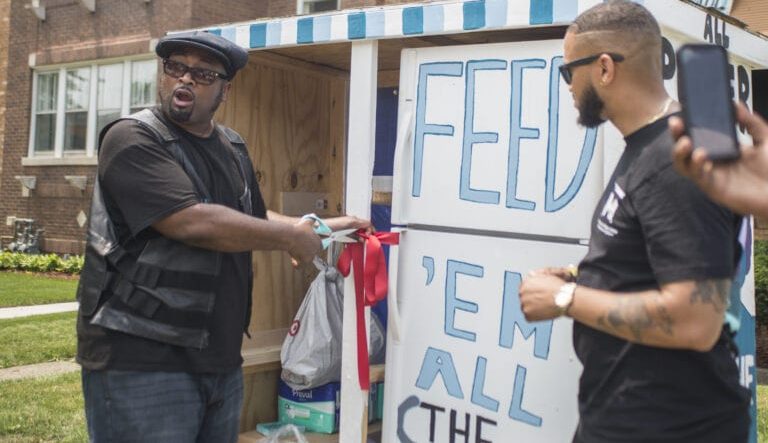 On an early Saturday afternoon, about a dozen residents and local organizers gathered in Maywood outside of the childhood home of Black Panther icon Fred Hampton. Armed with boxes of fresh whole corn, cherries, peaches and greens, they stood ready to stock a new community fridge that will provide people access to food 24 hours a day, seven days a week.

“Maywood is a food desert,” said Anthony Clark, an Oak Park activist and founder of Suburban Unity Alliance, a nonprofit that led the charge to open the community’s first public refrigerator.

“It’s all corner stores,” Clark said. “For people to even think about accessing fresh produce, they need money. They need to be able to travel. They have to leave the community and take their money outside of the community.”

The community fridge — which sits in the front yard of the Hampton House at 804 S. 17th Ave. — officially opened July 19. The fridge now joins a growing list, as cities near and far have picked up on the global trend which aims to help those facing food insecurity.

In January, Oak Park welcomed its first community fridge propped up along 4th Avenue and set up another one months later outside of Carnival Grocery on Oak Park Avenue. Clark said is he currently looking to bring in a community fridge to Chicago’s Austin neighborhood on the West Side.

Since the COVID-19 pandemic began last March, community fridges have been cropping up all over the nation. There are roughly 200 community fridges in the United States, according to the database Freedge, which keeps track of the fridges’ locations around the world.

On July 19, Clark appeared alongside a few leaders from two partnering organizations, including Fred Hampton Jr., active chairman of the Black Panther Party Cubs, and Randall McFarland, founder of the community group Best of Proviso Township.

During the event, Hampton Jr. spoke of what the community fridge meant to a community like Maywood. As he stood in front of his father’s old home, Hampton Jr. spoke of the Black Panthers’ long, storied fight for equality, especially for the Black community. Among the political party’s most prominent work was the creation of the free breakfast program, which fed thousands of children.

“This is symbolic,” said Hampton Jr., as he cut the red ribbon tied around the refrigerator handle. “The only way we can cut through this red tape … it’s gonna take the power of the people.”

The community fridge in Maywood rests underneath a wood frame to prevent weather damage and is powered by an outdoor outlet connected to Hampton’s home. There are a few shelves lined up next to the fridge, which is meant to store canned goods, nonperishable items and personal toiletries. Around the fridge, there’s a Little Free Library and a community garden flourishing with more fresh vegetables.

On the fridge itself, there’s a bright blue and gray slogan painted across its doors. It reads, “Free ‘Em All,” one of Fred Hampton’s and the Panthers’ slogans and a tribute to their mission to liberate oppressed people everywhere.

For Maywood natives such as Connie Riales, seeing the community fridge open up was a mark of a truly “awesome experience.” Riales, a community activist and a member of Best of Proviso Township, shared that the message behind this type of mutual aid speaks to Hampton’s legacy and that people – communities – are stronger together.

“He was a fighter,” Riales said about the late Hampton. “He would have been so proud to see something like this.”

As Riales saw more people coming, carrying in donations, she spoke about the importance of simple gestures, from one neighbor to another.

“We’re all in need of,” said Riales, who lives in Bellwood and serves on the District 88 school board and the Bellwood library board. “No person is an island, and we all need to help each other and support each other, because we are all one paycheck away from being homeless.”

Organizers of the community fridge are now taking donations. Items can include sealed package foods, cheese, fruits and vegetables. Unopened pasteurized yogurt and milk, fresh eggs and bread, as well as cured meats with a use-by date are also accepted donations. Raw meat and fish or home-prepared food are not allowed.