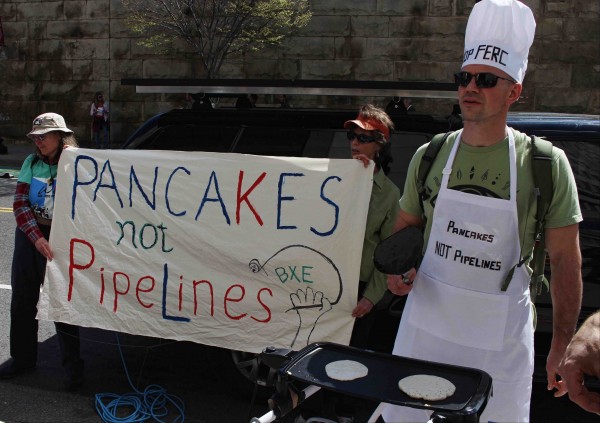 Above photo: Tim DeChristopher cooks solar pancakes in front of the FERC. Photos by Eleanor Goldfield of Art Killing Apathy.

Washington, DC – Today at FERC, Beyond Extreme Energy organized a pancake protest. Yep, environmental activist Tim DeChristopher and award-winning documentary film-maker Josh Fox were dressed in aprons, chefs hats and stood behind a solar powered grill cooking up some flapjacks for FERC employees and activists. Why? The Holleran family farm is one of the latest victims of FERC’s frack-happy agenda. A few weeks ago, FERC authorized the decimation of several acres of maple trees on the family’s property and brought in armed federal marshals to ensure that the destruction went through without a hitch. The most disgusting detail: the Constitution Pipeline for which the Holleran land was cleared for has not even been approved yet. So FERC pre-emptively razed a family’s livelihood with no assurance that it was even necessary for their bullshit pipeline.

Instead of accepting defeat after many many months of fighting, Megan Holleran decided to come down to DC from her family farm in Pennsylvania in order to invite some FERC commissioners downstairs to taste the last of their maple syrup crop – to sit face to face with the people whose homes and livelihoods they have destroyed – just one of many families, I might add.

Not surprisingly, no FERC commissioners came downstairs. After a final call to join them at the table and discuss energy options, Josh Fox had this to say: “Let it sink in that no one at FERC is willing to face the people that they’re hurting.”

Not content to just sit and wait, Josh Fox tried to walk into the building along with Bethany Yarrow, daughter of Peter Yarrow (of Peter, Paul & Mary), her daughter Valentina and Megan Holleran. However, Homeland Security, along with a half dozen cops and security guards protected the corporate goons from the dangers of solar-powered pancakes.

Plan B then took shape. Protesters legally walked in an oval picketing and singing outside of FERC, and then a group peeled off to block the entrance to the FERC garage with their bodies, assuring their arrest.

Homeland Security gave their typical three-warning announcement, roped off the area and proceeded to arrest the activists. Throughout this and indeed throughout the whole entire action, Bethany Yarrow sang, even while she was being arrested. She lead activists in beautiful renditions of “We Shall Not Be Moved” and crafted poetic sing-alongs on the fly. Although Valentina, her daughter, shed a few tears as her mother was taken away for standing up to corporate evil, she stood proudly on the front lines with activists as they chanted and sang. She will doubtlessly grow up to be an awesome woman.

Below is the original press release from Beyond Extreme Energy:

March 24, Washington, DC — Gasland filmmaker Josh Fox, Megan Holleran and five others were arrested in the driveway of the Federal Energy Regulatory Commission (FERC) while waiting for commissioners to join them for pancakes topped with the last drops of maple syrup from the Holleran family farm in New Milford, Pa.  They and about two dozen other activists were protesting FERC’s approval for the clear-cutting of a wide swath of maple trees at the Holleran farm.

Blocked by guards from entering the FERC building, Fox repeatedly called on the commissioners to come down for “the last dregs of syrup” and a conversation about fracked-gas infrastructure and climate change.

“Everyone I know is fighting a pipeline or a compressor station or a power plant that is in front of FERC for approval,” said Fox, wearing an apron that said “Pancakes not Pipelines.” “It is clear to me that FERC has to be the most destructive agency in the United States right now. They are faceless, nameless, unelected and ignore citizen input. I think of FERC as the Phantom Menace. The agency’s commissioners have been rubber-stamping fracking infrastructure all over country that threatens local communities and the planet by accelerating climate change.”

Climate activist Tim DeChristopher, wearing a chef’s cap and a “Pancakes not Pipelines” apron, cooked the pancakes on a solar-powered cooktop set up on the sidewalk in front of FERC.  DeChristopher said FERC had “cut down life-giving maple trees to make room for a death-dealing pipeline.” The agency has been “able to get away with this shameful behavior by operating in the shadows. We’re here today to invite FERC employees into the open, to engage in a human way with the people whose lives are impacted by FERC’s decisions.”

Protesters carried banners that said “Stop the Methane Pipeline” and “Pancakes not Pipelines.” Led by singer-songwriter Bethany Yarrow, who was also arrested and is the daughter of Peter Yarrow, protesters sang songs, including “We Shall Not Be Moved” and “Ain’t Gonna Let Nobody Turn Me ‘Round.”

While seated at a table, eating pancakes and waiting for FERC commissioners or employees to join them, several people hurt directly by the agency’s permits also spoke.

Holleran, among those arrested with Fox, said FERC had given approval for the trees to be cleared before the pipeline had all the required permits. “We followed all the rules. We asked them to wait before doing irreparable harm to our farm. This could happen to anyone,” she said. “FERC, come on down and chat with me. FERC has a chance to be accountable now.”

Nancy Vann, a Westchester, NY, landowner who blocked tree-cutting on her land for the Spectra Energy’s Alqonquin Incremental Market (AIM) pipeline, said, “Each tree that is cut is another step toward an uninhabitable planet. I’m here for Megan and her family and for the 20 million people living within a 50-mile radius of the pipeline that’s planning to go 105 feet from the Indian Point nuclear power plant and two earthquake fault lines.”

Activist and psychiatrist Lise van Susteren said, “We are here to tell [FERC] we will not stand by while you have this unholy alliance with industry.” Psychiatrists and other health-care professionals have to report to authorities any child abuse, she said. “Every child stands to suffer because of what we are doing to the climate.”

“We can not afford to think what is happening now doesn’t affect us all,” said Aria Doe, co-founder of the Action Center for Education and Community Development in Rockaways, NY, where neighborhoods were inundated by Hurricane Sandy.   Much of the pollution ends up in poor communities of color, she said. “I’m here for my future grandchildren.”

Also at the action was Karenna Gore of the Center for Earth Ethics.

In addition to Fox, Holleran and Yarrow, those arrested were: Gabe Shapiro from Massachusetts; Jane Kendall from New York City; Don Weightman, a  BXE organizer from Philadelphia; Ron Coler, a Select Board member of Ashfield, MA, who’s fighting the NED pipeline and Connecticut Expansion.

Yarrow’s 9-year-old daughter, Valentina Ossa, watched in tears as her mother, still singing, was handcuffed and put in a Homeland Security van.

Beyond Extreme Energy organized the action, one of many the group has led at FERC. BXE is working with groups and individuals across the United States to revoke FERC’s mandate to operate an arm of the oil and gas industry. It seeks an end to FERC permits for new pipelines and other projects that allow the expansion of the fracked-gas industry. BXE has made this demand in an escalating series of protests at FERC beginning in 2014 and including disruptions at the monthly FERC meetings, described in the March 20, 2016, New York Times article “Environmental Activists Take to Local Protests for Global Results.”

BXE will continue its actions at FERC during the Rubber Stamp Rebellion planned from May 15 to 22.