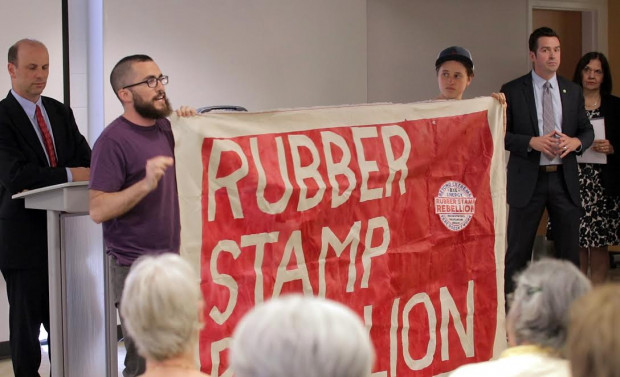 FERC and LaFleur Confronted At Duke University Over Pipelines

Beyond Extreme Energy and the Alliance for the Protection of Our People and the Places We Live combined forces at Duke University in Durham North Carolina to challenge FERC’s ongoing Rubber Stamp permitting of fracked gas infrastructure, and to let acting head FERC Commissioner Cheryl LaFleur (above photo on far right) know that North Carolina demands the rejection of Dominion and Duke’s permitting of the Atlantic Coast Pipeline.

Steven Norris, who had registered for the event, was excluded and tried to barge through security at beginning of event , and talk about FERC’s rubber stamping and the ACP. Stopped by police, he failed to get in, but this action seemed to distract security, who left the room with him. The absence of security enabled Lee Stewart and Emma Wyman to unfurl BXE’s iconic, Rubber Stamp Rebellion Banner (first and third photos), which has been used multiple times in DC at FERC and at FERC Commissioner’s homes. Lee’s spoke: “The Federal Energy Regulatory Commission does not operate independently of the gas industry it supposedly regulates. FERC has only rejected one permit application in the past thirty years. This is simply unacceptable and FERC’s rubber stamping of gas industry projects has to end.”

Not shown in the photos is Greg Yost, who was able to talk about the damage which the proposed ACP will do to families in NC and why we were challenging Cheryl LaFleur.  “Today is a chance to learn about the people and the communities that FERC would harm with an Atlantic Coast Pipeline permit:  people like Barbara Exum of Wilson County, Francine Stephenson of Johnston County, and Marvin Winstead of Nash County. These are just a few of the thousands of North Carolinians who would be directly affected and have their lives endangered by the pipeline.”

Shortly after the disruption began Cheryl Lafleur disappeared and the event was cancelled. She had been scheduled to speak about a transition to a low carbon future, which of course is possible only if the ACP and similar projects are rejected by FERC.
Several students and others in audience of this elite, powerful and wealthy university voiced their anger at the protesters for disrupting their opportunity to hear Cheryl LaFleur.
At the same time that Duke University invited Cheryl Lafleur, the Universioty is considering a partnership with the country’s largest utility to build a gas fired power plant on the Duke University campus. This facility, is built will cost $55 million and be paid for by the ratepayers of North Carolina, some of whom are among the poorest people in the US and will also be impacted by and have to pay for the ACP..
In contrast with the some in the audience who were upset with the protest,  one person from Fayetteville whose home is located in the pipeline’s blast zone  commented: “Cheryl LaFleur apparently could not stand the heat, so like a child picked up her marbles and went home.”
Steve, Lee and Emma were briefly detained by Duke University police, who after some discussion, cited them for trespass. Their penalty is limited to being exiled from Duke University grounds forever.