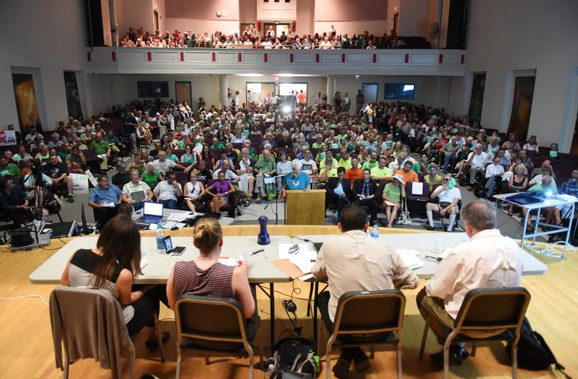 FERC Gets Earful: Scores Turn Up The Heat On Pipeline Regulations

The region’s entire state legislative delegation, Congressman James McGovern and many others of the dozens of people who signed up late in the afternoon to speak in a nearly packed Greenfield Middle School auditorium buzzing with fans called on the Federal Energy Regulatory Commission to postpone the scoping process that will guide the planned environmental impact statement on TGP’s proposed project for which the company plans to file an application in October and have in service in the fall of 2018.

The legislative delegation presented prepared testimony, read by legislative aide Chris Capucci that called for suspension of the scoping process, which FERC has scheduled to end on Aug. 31.

TGP’s filing just last Friday of a 79-volume draft environmental report on the nearly $5 billion project, with more than 6,500 pages of details and maps, is just cause for the federal agency to restart the public process that began with hearings July 14 in Pennsylvania and New York, included a Pittsfield hearing Wednesday night and continues tonight with hearings in Milford, N.H., and New Britain, Conn.

“Despite the lateness of the filing of these reports, they are incomplete, and omit critical information that is necessary for a thorough and accurate review of the impacts of this proposed project in our communities,” said the testimony by Sens. Stanley Rosenberg and Benjamin Downing as well as Reps. Stephen Kulik, Gailanne Cariddi and Susannah Whipps-Lee.

McGovern had a statement read by his aide cautioning, “As currently proposed, the NED project crosses miles of pristine land that has been protected by state and federal dollars. … It should be protected the construction of a pipeline which would run directly through it.”

Others who spoke Wednesday night and had prepared written testimony in advance echoed the legislators’ call for postponement.

Among them was Franklin Council of Governments Executive Director Linda Dunlavy, who called for FERC to evaluate the need for the pipeline.

“Even with the recently proposed reduction in pipeline size to 30 inches and 1.3 billion cubic feet per day, this pipeline project still has only 38 percent of its capacity committed. … In the absence of a demonstration of need, FERC lacks authority to approve the project.”

FERC Branch Chief James Martin, one of three staff members who directed the meeting that went on beyond 11 p.m., said outside of the session that the scoping process is preliminary and that his agency would continue to accept public comments beyond the Aug. 31 deadline.

“We’ll take applications after the application is filed,” he said, emphasizing that people can also file comments in writing. “We’ll continue to take comments up to the point that we can no longer roll them into the draft.”

Still, he said he understood why people would feel like the process chugs along no matter what happens.

“The 79 volumes of this report have 6,571 pages of maps, tables and technical drawings, but also still contain enormous gaps in information like a Horizontal Directional Drill Plan that consists of four pages containing one sentence stating that the plan is yet to come, and over 10,000 instances of ‘to be determined’ in tables that should be filled with actual information that we can evaluate,” said Rosemary Wessel of Cummington, a founder of the opposition group No Fracked Gas in Mass. “We had four months to review the previous Resource Reports filed in March, and now, with a larger, more complex set we have just five days? We call on FERC to do the right thing.”

Wessel also called on FERC to prevent what she called an “illegal segmentation” of TGP’s NED and Connecticut expansion projects, “which share at least two of the few customers they have. … You must review the overall Northeast expansion by Kinder Morgan as a single project to remain within the law.”

The project would include about 64 miles of pipeline in Massachusetts, entering the state at Hancock and largely located within a 20-foot path along electric powerline rights of way.

TGP is asking FERC to grant a certificate for the project one year from its planned October application, with plans to begin construction in January 2017.

About 34 miles of the project would be built across Ashfield, Conway, Shelburne, Deerfield, Montague, Erving, Northfield and Warwick and include a compressor station on 10 acres of a 156.3-acre Gulf Road parcel in Northfield.

Greater Northfield Watershed Association President Andrew Vernon, in prepared testimony he planned to present, told FERC, “The entire proposal is ill-conceived for many reasons,” and called the recent TGP report — with an entire section on compressor station details — “sorely lacking in transparency.”

In Northfield, where a planned compressor station for the project was recently reduced in size from 80,000 to 41,000 horsepower to reflect a reduction in capacity from 2.2 billion to 1.3 billion cubic feet per day, he said, the planned station is “perched above several water sources,” with spills and settling emissions possible.

“The justification for the placement of the proposed station was faulty from the start. Just because the powerline right of way lies on the ridge above our town does not automatically mean that this is a good spot for the proposed project,” he said.

While the session was dominated by those opposing the pipeline, raising concerns about noise and light pollution, concerns about the impact on underground water sources, historical resources, geology and endangered species, there was a contingent of dozens of labor union members who voiced support for the project.

Tom Andrews, business manager for Massachusetts Building Trades Laborers Local 596, said that although he believes in renewable energy and protection of the environment, he is primarily interested in seeing the creation of at least 500 local jobs.

But he also said that while fossil fuels move through the area on rail and trucks, the proposed pipeline would bring natural gas to the region safely underground, lowering energy costs in the process.

Chelsea Furlon of Charlemont, another unionized laborer, told the panel, “We need new infrastructure. We need more jobs. We need industry. Economic growth … I support this pipeline, and I live here, too.”

Other speakers called for “environmental justice” and for protection of sensitive resources like Montague Plains, sacred Native American ceremonial stone landscapes and the National Scenic Trail.

As people waved away the heat with green hand fans that told those on the auditorium stage, “FERC do your job,” Conway Selectboard member Jim Moore described what he called the profit-driven energy industry’s destruction of the national environment and said “You have the opportunity to begin to make a difference, and I appeal to you to use that opportunity.”

Missed your chance to testify before the Federal Energy Regulatory Commission?

According to information provided by FERC, there are three methods other than presenting testimony at a public hearing than you can use to submit your comments to the commission.

FERC says it will “provide equal consideration to all comments received, whether filed in written form or provided verbally.”

Be sure to reference the Northeast Energy Direct pipeline project docket number “PF14-22-000 “with your submission.

FERC encourages electronic filing of comments and has staff available to assist at (202) 502-8258 or efiling@ferc.gov.

1) You can file your comments electronically using the eComment feature at www.ferc.gov under the link to Documents and Filings. This is for “brief, text-only comments on a project.”

2) You can file your comments electronically by using the eFiling feature on the same website under the link to Documents and Filings. With eFiling, you can provide comments in a variety of formats by attaching them as a file with your submission. New eFiling users must first create an account by clicking on “eRegister.” If you are filing a comment on a particular project, you are advised to select “Comment on a Filing” as the filing type;

3) You can file also a paper copy of your comments by mailing them to:

A fact sheet prepared by the FERC entitled “An Interstate Natural Gas Facility On My Land? What Do I Need To Know?” is available for viewing on the FERC website for Citizen’s Guides: http://www.ferc.gov/for-citizens/citizen-guides.asp

This fact sheet addresses a number of typically asked questions, including the use of eminent domain and how to participate in the Commission’s proceedings.