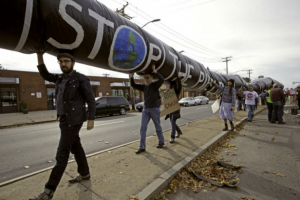 Above Photo: KEYSTONE INSPIRATION: West Roxbury Crushed Stone is at a quarry near a proposed natural gas pipeline in West Roxbury.

Two natural gas pipeline companies will have to wait longer than they wanted for potential approval by the federal agency that authorizes and regulates pipeline projects.

The Federal Energy Regulatory Commission postponed a decision on the PennEast pipeline to January 2017, seven months later than the company requested.

FERC staff members compile a comprehensive environmental impact study for each pipeline, which the commission reviews before making a decision whether to approve the projects.

When PennEast Pipeline LLC submitted its formal application on Sept. 24, 2015 to construct a $1 billion, 118.8-mile pipeline from Dallas Township to Mercer County, New Jersey, the company requested FERC issue an order by Aug. 1, 2016 granting authorization for the pipeline.

But FERC’s schedule for PennEast, released Thursday, lists Dec. 16 as the date to issue notice a final environmental impact statement has been completed, and moves the decision on authorization to March 16, 2017.

“The Notice of Schedule should be viewed as the key milestone it is for the development of the PennEast Pipeline Project,” PennEast spokeswoman Patricia Kornick said in a prepared statement.

“It enables PennEast to take the next steps in its plans to build the PennEast Pipeline Project that will alleviate existing system constraints, increase reliability and deliver reduced costs to local natural gas and electric consumers.”

Kornick went on to state, “Whether it be the construction of a highway, bridge or underground pipeline, many variables are factored into proposed timelines of most major infrastructure projects, including the PennEast Pipeline Project. PennEast is evaluating how the Notice of Schedule might affect its initial proposed timeline and has not revised its current November 2017 in-service date.”

Jeff Tittel, director of the New Jersey Sierra Club, said in a prepared statement that the change by FERC is because “large opposition to the project by municipalities and landowners along the route has made it difficult for PennEast to get the information they need to apply for permits, thereby delaying the project.”

FERC spokeswoman Tamara Young-Allen said pipeline companies always request an action date, but the commission doesn’t have to adhere to it.

“As far as FERC staff is concerned, we’re on track,” she said.

That has nothing to do with the merit of the application, she explained: “We’re taking our time and doing a complete and thorough review of the proposal.”

In the case of the Atlantic Sunrise project, Williams filed a formal application with FERC on March 31, 2015.

The project involves running approximately 197.7 miles of pipeline from Susquehanna County through Wyoming, Luzerne, Columbia, Northumberland, Schuylkill and Lebanon counties, to connect to an existing part of the Transco in Lancaster County.

In its application, Williams asked FERC to grant authorization for the project by April 29, in order to “maintain the construction schedule required to meet the July 1, 2017 in-service date for the Project.”

However, FERC’s schedule calls for issuing the notice of the final environmental impact study by Oct. 21, and for a Jan. 19, 2017 decision deadline.

The company has updated its Web site, atlanticsunriseexpansion.com, to reflect the change in timeline.