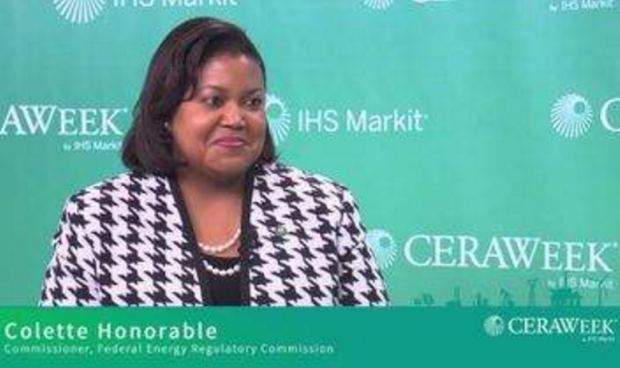 Above Photo: Screenshot from CERAWeek video.

Only one week after leaving the Federal Energy Regulatory Commission (FERC), former commissioner Colette Honorable has joined a law firm lobbying for Dominion Energy, the company behind the controversial Atlantic Coast Pipeline.

Virginia lobbying disclosures show that Reed Smith has been lobbying for Dominion since at least 2015. The firm has so far assigned three lobbyists to work on Dominion’s behalf: William Thomas, Jeffrey Palmore, and Edward Mullen.

Honorable, a Democrat, was appointed as FERC commissioner by former President Obama in August 2014. Previously she served as chairperson of the Arkansas Public Service Commission. Reed Smith hired Honorable as a partner in its international energy & natural resources practice.

As DeSmog previously reported, Honorable has ties to a senior executive at Southern Company, a minority stakeholder in the Atlantic Coast Pipeline.

Honorable’s immediate transition to a private sector firm connected to the industry she had regulated follows in the steps of many other ex-FERC commissioners and employees. Just last year, former commissioner Philip Moeller was hired by the Edison Electric Institute, the main lobbying group for US utility companies, while former commissioner Tony Clark joined Wilkinson, Barker & Knauer LLP, a firm with a robust energy practice.

A 2015 report by E&E found that FERC employees negotiate their prospective industry jobs while still at FERC.

The hiring of Honorable comes at a crucial moment in the review process of the Atlantic Coast pipeline. FERC has yet to approve the project, which would transport fracked gas from West Virginia, through Virginia, and into North Carolina. Dominion and its partners are also awaiting various permits on the state level.

The pipeline has become a major point of struggle for activists and residents in the directly affected regions. Opponents were recently able to turn the project into a political flashpoint. Last month’s Democratic primaries in Virginia centered in part on the candidates’ position on the project.

DeSmog reached out to both Smith Reed and Colette Honorable for comment but had not received responsive replies prior to publication.