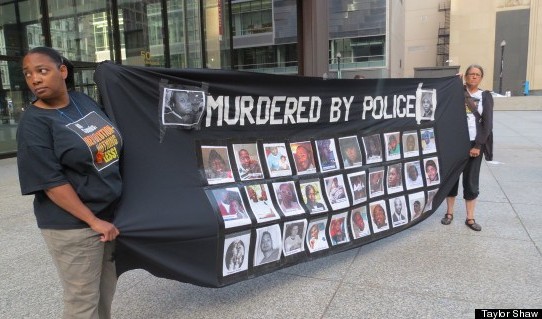 Ferguson and Beyond – Next Steps to End Police Brutality

Note: This edition of Clearing The FOG Radio, co-hosted by Margaret Flowers and Kevin Zeese, focuses on where the movement against police abuse is going. With the decision of the grand jury possible any day now, and the likely result being no indictment according to law enforcement leaks to the press, how should the people of Ferguson and the nation react? What would be a constructive to response for the lack of justice for Michael Brown? And, what should the movement be demanding. In the first half hour two guests who have worked in Ferguson as part of the movement for justice for Michael Brown discuss next steps, the mood of the community and how those of us outside Ferguson can help. In the second half hour, two activists in Washington, DC and New York City comment on the situation, not only in Ferguson but regarding police abuse nationally. In DC, Kymone Freeman has been part of the #DCFerguson coalition and in NYC, Glen Ford long-time commentator on African American issues and editor of Black Agenda Report. Ford proposes that rather than “community policing” we need “community controlled policing” that includes the ability of communities to remove officers who are racist or abusive.

The month of October has been dedicated to the issues of mass incarceration, racially-biased policing, militarized policing and the abusive behavior and extrajudicial murders being carried out by police. Over the weekend of October 10, thousands of people converged in St. Louis, MO to demonstrate for justice in the murders of Michael Brown and other Black men killed by police. On October 22, thousands of people marched and protested in 80 cities from coast to coast. There is tremendous momentum right now to change policing in the United States. On this program, our guests talk about what is happening in Ferguson, MO and other areas of the country and about next steps in this struggle. Especially we discuss what response would be constructive in the high likelihood that the officer who shot Michael Brown is not indicted by the Grand Jury.

Uniting to Transform US Policing by Kevin Zeese

Montague Simmons is chair of the St. Louis-based Organization for Black Struggle.

Kambale Musavuli is a communications volunteer with Hands Up United. A native of the Democratic Republic of Congo, Kambale is a human rights activist, Student Coordinator and National Spokesperson with the Friends of the Congo (FOTC). He has written for The Washington Post, Foreign Policy in Focus, The Huffington Post and numerous other academic and news publications. He has been interviewed on National Public Radio, Democracy Now, ABC News, Al Jazeera English Television, Radio France International and a myriad of radio and television programs. He has been featured in documentaries such as Iara Lee’s “Cultures of Resistance,” Martin Scorsese’s “Surviving Progress,” and the film “Crisis in the Congo: Uncovering the Truth.”

Glen Ford is the Executive Editor of Black Agenda Report.