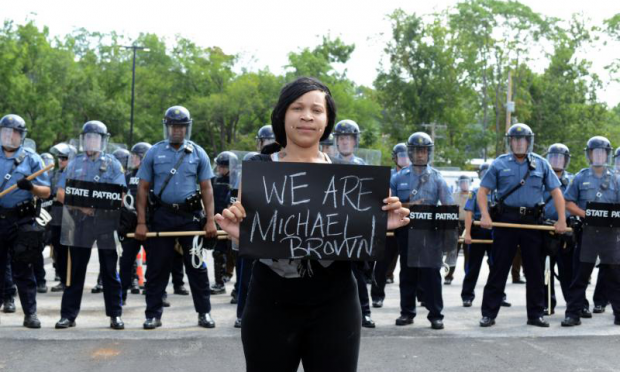 Ferguson Organizers Say Violent Police Are The Cause of Riots

A coalition of nearly 50 groups who have been protesting in Ferguson, Missouri since the shooting of the unarmed African American teen, Michael Brown, have issued a list of demands to law enforcement. They are calling it the “rules of engagement” and calling on police to accept them if they want there to be peaceful protests.

Without question, most of the Ferguson-area protests since last August have been peaceful on the part of activists. But police have often been the ones to initiate violence and unrest, disrupting and attempting to suppress freedom of speech and assembly.

A new wave of protests are expected to erupt soon, as the grand jury decision about whether the killing of Michael Brown was justified is expected to come at any moment now.

At a recent news conference about the list of demands issued to local, state and federal law enforcement, the “Don’t Shoot Coalition” said that police should be concerned with safety first, and if they are, this means they should be willing to agree to a “de-militarized response.”

This, the coalition said, would preclude the use of armored vehicles, rubber bullets, rifles and tear gas. It would mean that while police could observe protests, and watch for crime, they would not show up in manner that seems to consistently escalate force from the outset.

The group asked police for 48 hours advance notice before the public announcement of the decision. Ferguson police told us, however, that there is “no way” that will happen.

Michael T. McPhearson, the executive director of Veterans For Peace, and a co-chair of the coalition said the group “must do what we can to ensure there’s not loss of life.” He added that, “we want to de-escalate violence, but we do not want to de-escalate action.”

The coalition said that police are ultimately to blame for escalating tensions, as before they appeared on the streets in riot gear and the like, there had not been any instances of rioting or looting and protest leaders and activists had been successfully “policing” the crowds who had turned out up until that point.

Montague Simmons, chairman of the Organization of Black Struggle, said that people “are going to pour into the street,” adding that nothing police think they can do will stop that from happening.