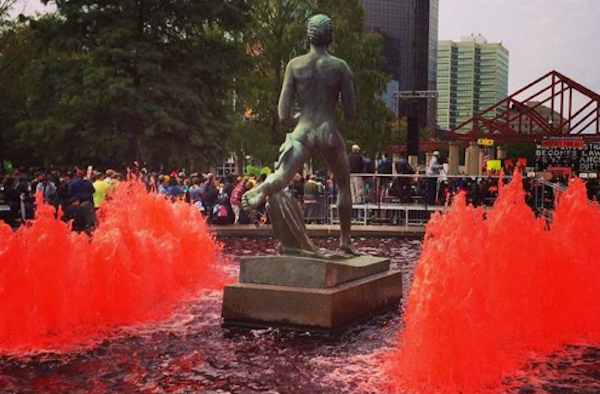 There were well over a thousand people from various community, union and activist organizations out in the streets of downtown St. Louis yesterday. They were not just marching for justice for Mike Brown, the unarmed black teenager who was gunned down by white Ferguson police officer, but were also coming together to highlight the need to transform a moment into a movement that will confront police violence in communities.

One of the more powerful moments of the day came when Montague Simmons, chair of the Organization for Black Struggle (OBS) and founder of Hands Up United, took the stage during the rally after the march through the city. Simmons mentioned that the “red fountains” were freaking him out because they made him think of the blood shed throughout generations in America. [Note: St. Louis dyed the fountain red for the Cardinals baseball team, which is currently in the playoffs.]

“Your participation was consecrated by blood sacrifice that goes back generations. The building behind you was the place that more than 200 years ago Dred Scott’s life was ruled three-fifths of a human being. Police terror existed well before slavery ended. They didn’t value black lives then. They don’t value black lives now. We have to recognize that this space is a moment in a continuum of a movement that expands for generations,” Simmons declared.

He continued, “This moment was actually consecrated in blood, and your being here, by these waters – not just these, not just the river that actually runs out there – but by that blood [which] baptizes you and gives you a new commitment to what this moment must represent. This moment only becomes a movement with you.”

That blood red actually takes on additional meaning for Cardinals fans, who have made red shirts that say, “Go Cards!” and on the back, “Darren Wilson – 6.” The six stands for Brown being shot six times by Wilson.To the extent that Cardinals fans push back against a groundswell of people seeking accountability for a killer cop, the fans are not only making their fandom synonymous with police violence but they are transforming the very colors for their team into something grotesque. They are proudly donning red-colored shirts that becomes the blood of black people, who they dehumanize and rationalize as deserving of execution on the street.

Another part of the day that stood out was the way that the community fighting for justice for Brown and all other victims of police violence in America fearlessly welcomed Palestinians and Palestinian solidarity groups into the fray.

Suhad Khatib of the St. Louis Palestinian Solidarity Committee stood up on stage and explained, “The Defense Department 1033 program has provided over $5.1 billion in equipment to police agencies since 1991. Now with little to no training, police departments have access to a shocking collection of military firepower that can be used against civilians at any moment. We have seen a very small portion of what that looks like in Ferguson. That same equipment is being transferred to Israel in the form of $3 billion of our own tax money to oppress and occupy Palestinian people.”

Noting that over 2000 people had been killed in Gaza this past summer and that thousands of homes had been demolished, she then added, “Palestinians and Palestinian allies have traveled from all over the country to be with you today in unqualified solidarity because we recognize that none of us is free until all of us are free. And because we know that black liberation in this country will lead to liberation for all. ”

Progressives have a tradition of excluding Palestinians from their organizing. But, as St. Louis rapper and activist Tef Poe told the crowd at the rally, Palestinians were one of the first people to show solidarity with people in Ferguson when the tear gas started to be fired. This movement is not about to exclude other marginalized groups just so they can have an easier route toward achieving dignity, respect, justice and power.

Cheyenne Green of Lost Voices brought to attention to the need for women to be front and center in the movement. She announced that a “caucus breakfast” was scheduled for the following morning for women to gather and discuss the role they want to play in the community.

Another activist, Alexis Tucker, spoke about the youth being at the forefront.

Brown’s family had a representative at the rally, who reminded the crowd that the primary objective is still pushing for the arrest of Wilson.

As Simmons argued from the stage, “If this moment is going to be all that it can be, we got to make the cost of black life too high for them to take it.”

The community recognizes that they cannot let up on all levels of government until Brown’s family gets the outcome they deserve. And every action they take is about creating a cost for government officials, who impede and actively conspire against even the possibility of justice.