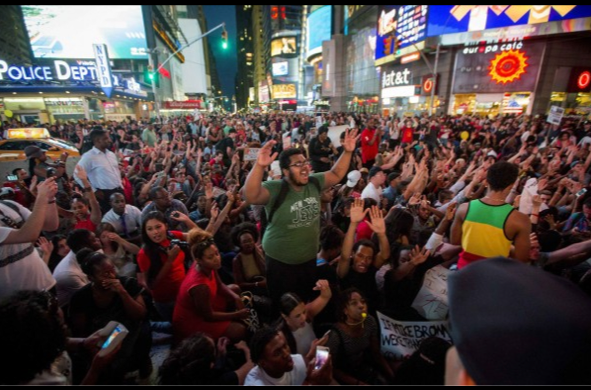 FERGUSON, Mo. — For the past week in Ferguson, reporters have been using the McDonald’s a few blocks from the scene of Michael Brown’s shooting as a staging area. Demonstrations have blown up each night nearby. But inside there’s WiFi and outlets, so it’s common for reporters to gather there.

That was the case Wednesday. My phone was just about to die, so as I charged it, I used the time to respond to people on Twitter and do a little bit of a Q&A since I wasn’t out there covering the protests.

Initially, both Ryan Reilly of the Huffington Post and I were asked for identification. I was wearing my lanyard, but Ryan asked why he had to show his ID. They didn’t press the point, but one added that if we called 911, no one would answer.

Then they walked away. Moments later, the police reemerged, telling us that we had to leave. I pulled my phone out and began recording video.

An officer with a large weapon came up to me and said, “Stop recording.”

I said, “Officer, do I not have the right to record you?”

He backed off but told me to hurry up. So I gathered my notebook and pens with one hand while recording him with the other hand.

As I exited, I saw Ryan to my left, having a similar argument with two officers. I recorded him, too, and that angered the officer. As I made my way toward the door, the officers gave me conflicting information.

One instructed me to exit to my left. As I turned left, another officer emerged, blocking my path.

As I turned, my backpack, which was slung over one shoulder, began to slip. I said, “Officers, let me just gather my bag.” As I did, one of them said, “Okay, let’s take him.”

The response by law enforcement to protesters in Ferguson, Mo., is being criticized for its level of force and use of military-style equipment. We’ve labeled the weapons and gear being used by police in these photos from Ferguson. (Tom LeGro and Thomas Gibbons-Neff/The Washington Post)

Multiple officers grabbed me. I tried to turn my back to them to assist them in arresting me. I dropped the things from my hands.

That was when I was most afraid — more afraid than of the tear gas and rubber bullets.

As they took me into custody, the officers slammed me into a soda machine, at one point setting off the Coke dispenser. They put plastic cuffs on me, then they led me out the door.

He didn’t have an opportunity, because he was arrested as well.

Ryan and I asked the officers if they intended to help the man. They said he was fine. The screaming went on for the 10 to 15 minutes we stood outside the van.

Eventually a police car arrived. A woman — with a collar identifying her as a member of the clergy — sat in the back. Ryan and I crammed in next to her, and we took the three-minute ride to the Ferguson Police Department. The woman sang hymns throughout the ride.

During this time, we asked the officers for badge numbers. We asked to speak to a supervising officer. We asked why we were being detained. We were told: trespassing in a McDonald’s.

“I hope you’re happy with yourself,” one officer told me. And I responded: “This story’s going to get out there. It’s going to be on the front page of The Washington Post tomorrow.”

And he said, “Yeah, well, you’re going to be in my jail cell tonight.”

Once at the station, we were processed, our pockets emptied. No mug shots. They removed our restraints and put us in a holding cell. Ryan was able to get ahold of his dad. I called my mom, but I couldn’t get through. I couldn’t remember any phone numbers.

We were in there for what felt like 10 or 15 minutes. Then the processing officer came in.

I asked if there would ever be a report. He came back with a case number and said a report would be available in a week or two.

“The chief thought he was doing you two a favor,” he said.

The Ferguson Police Department did not immediately respond to a request for comment on Lowery’s detention.

The following is a statement on the incident from Washington Post Executive Editor Martin D. Baron:

Wesley has briefed us on what occurred, and there was absolutely no justification for his arrest.

He was illegally instructed to stop taking video of officers. Then he followed officers’ instructions to leave a McDonald’s — and after contradictory instructions on how to exit, he was slammed against a soda machine and then handcuffed. That behavior was wholly unwarranted and an assault on the freedom of the press to cover the news. The physical risk to Wesley himself is obvious and outrageous.

After being placed in a holding cell, he was released with no charges and no explanation. He was denied information about the names and badge numbers of those who arrested him.

We are relieved that Wesley is going to be OK. We are appalled by the conduct of police officers involved.

More: These tweets tell the story of the arrest of Ryan J. Reilly of Huffington Post.