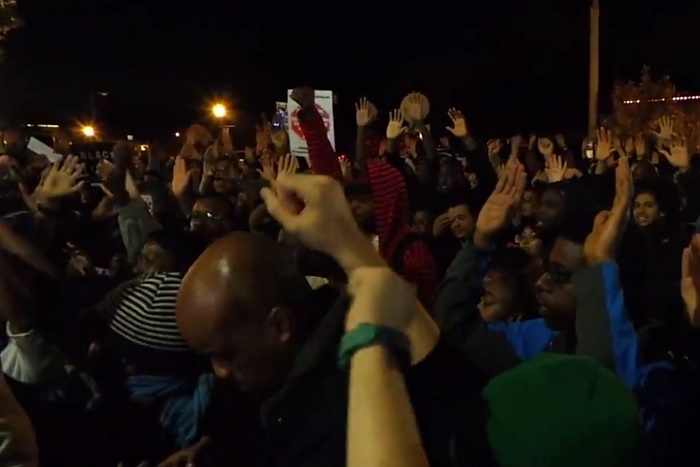 #FergusonLive: The End Of Suffering Silently

America is supposed to be the land of the free. Recent events have shown us that while it isn’t free for all, it is at least still the home of the brave.

Thousands of activists gathered in Ferguson, Missouri, October 10-13, to show the world they will not be silenced, unless they choose silence as a weapon. At one point during the “weekend of resistance”—a direct response to the slaying of Michael Brown on August 9, and other Black men across the country in recent months, at the hands of law enforcement—people lay silently in chalk outlines on the road, fists raised.

Back in August, Ferguson residents made a simple demand: Arrest Brown’s killer, police officer Darren Wilson. That was it. Just get the wheels of justice turning. In the intervening weeks, the world learned Wilson didn’t even bother turning in an incident report. We watched the Ferguson police defy the Justice Department and refuse to wear their name badges. But the people in Ferguson were not only watching a failed justice system—they were adding Brown’s name to a long list of police shooting victims and getting organized.

To this end, the organizers of Ferguson October’s “weekend of resistance,” including Hands Up United, the Organization for Black Struggle, and Missourians Organizing for Reform and Empowerment invited the world to join in protesting not just one shooting of one man, but to protest the brutal struggle of being Black in America. Mike Brown’s name, like Trayvon Martin, Eric Garner, and John Crawford, has come to represent both a case of police brutality and hope. It means countless indignities and the routine violation of rights that white people take for granted, and also refusing to accept the status quo. Thus, Ferguson October marks the gathering of a thousand voices and the end of suffering silently.

That’s what happened this weekend in Ferguson. Protesters shut down at least three Walmarts on behalf of John Crawford, whom police killed in Ohio in August for carrying a toy weapon in a state where he was legally allowed to carry a real one. Ferguson protesters carried a mirrored casket through the streets so that every one of the people lining the sidewalks could bear witness to the fact that they, too, might be shot down. They used provocative language and tactics, and refused to apologize. They refused to disperse, choosing instead to be arrested in acts of civil disobedience.

The weekend was rainy, and tense. Media coverage focused heavily on dissent within the protesting community, painting inevitable generational divides as something new and different instead of history repeating itself. MSNBC talked about how young people “resorted to profanity,” as though a young Black man in St. Louis protesting the treatment of Mike Brown on the heels of the killing of Vonderitt Myers (another Black teen shot in south St. Louis on the eve of the protests) didn’t have cause to scream obscenities to the heavens and demand more than he is being given.

There’s one young man (dubbed Low Key by his friends because, they say, he has more energy than a hundred toddlers put together) who spoke on camera months ago about his motivations. His arm was wounded and swelling from a rubber bullet that police had fired at him. “Y’all gotta do what’s right on both sides of the law,” he said. He pointed out that it didn’t matter really how he reacted, because he had no reason to think police would protect him. “If y’all didn’t notice, we’re protecting ourselves,” he said. This past weekend, he marched. He marched for the same reasons he marched the very first weekend: because he is young and Black, and he knows that it’s his life and future on the line. He has been marching every night for months, and he will not soon forget the lessons he has been learning from the police. He has become a leader, at the age of 15. He is determined to make his future one in which he does not need to fear that those responsible for protecting him will be his killers. This weekend, he was accompanied by the support of thousands.

But even their nonviolent approach was met with violence from other community members and the police. At a St. Louis Rams game on Monday night, people who unfurled a banner that said “Black Lives Matter” had to face down overtly racist football fans, who not only screamed epithets at them for daring to exist while football was happening, but actually started throwing punches. One man who got hit, Elon James White of This Week in Blackness, credits other protesters for making sure he didn’t get into a fight. That White and his fellow protesters didn’t take the bait, that they had to collectively rise above, that he was hit for nothing more than existing in a space, says everything you need to know about why thousands of people showed up to support Ferguson October.

When residents of Ferguson speak, whether in person or on social media, they talk about dignity. It comes in many shades, sometimes tinged with grief or anger or hope, but it always comes down to dignity. They speak of what it means to know that the more melanin your skin contains, the fewer rights you are afforded. They talk about their right to live, fall in love, and have babies who will not one day be killed for walking down the street when the wrong police officer happens by. They speak with longing and grief about rights that the vast majority of Americans simply take for granted.

For those rights, and more, they protest. It is not a past tense. The weekend of action is over, but DeRay and Netta will still put out the newsletter. Lost Voices will still march.

This weekend saw hundreds of arrests, some for no reason and some for reasons that were later proven impossible, like the time police said people were throwing rocks but no footage could be found, despite the fact that dozens of cameras were rolling and the police themselves were supposed to be wearing body cameras.

James Baldwin once said, “It comes as a great shock … to discover that the flag to which you have pledged allegiance … has not pledged allegiance to you.” This weekend, knowing that many people would not understand, a few protesters burned flags in Ferguson. The reaction was immediate; some people who said they were on the side of the protesters thought it was a rude tactic, maybe a bridge too far.

We require politeness from our oppressed in America. Workers must thank their employers for graciously hiring them rather than simply upholding their contract. Women must gracefully duck away from sexual harassment rather than accuse a man of unacceptable advances. And people of color, particularly Black people, must smile and thank police officers for not killing them. The people in Ferguson, while they were more respectful than the city’s police force might have deserved, refused to be ignored this weekend. They are the reason that while we might not be able to claim that America is the land of the free, it is most definitely still the home of the brave.