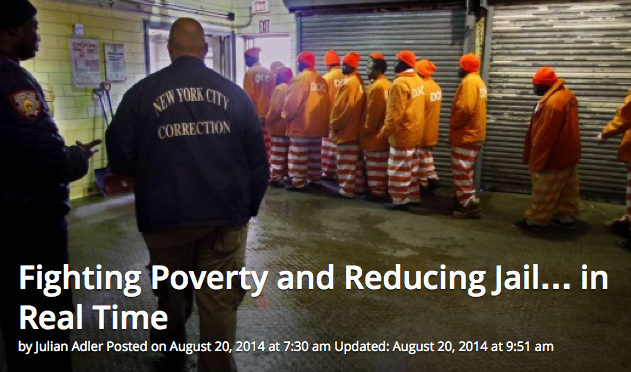 Many of us who work in the criminal justice system have come to understand the profound connection between poverty and mass incarceration.  Put simply, individuals with criminal histories – even minor ones – find it exceedingly difficult to enter the workforce and provide for their families.  One pragmatic response to this problem is to incarcerate fewer people, particularly in local jails.

While much of the public debate and academic discourse focuses on the challenges of reducing federal and state prison enrollments, mass incarceration is a problem with a significant local dimension too.  As of June 30, 2013, an estimated 731,208 persons in the U.S. were confined in local jails; a much larger total of 11.7 million persons were imprisoned in local jails at some point over the preceding year.  More than 6 out of 10 of those jailed in the U.S. have yet to be convicted of any crime.  Indeed, many of those held in pretrial detention are actually eligible for release yet they cannot afford to post bail – often nominal amounts of money.  And contrary to popular thinking, the overwhelming majority of criminal prosecutions concern relatively minor offenses.  In New York City, three out of four cases that make it to criminal court are misdemeanors – a total of more than 235,000 cases in 2012.

Any time spent behind bars is harmful to individuals, families, and communities.  In many cases, the use of jail makes society less safe: studies have consistently found that incarceration does not deter re-offending, with some research indicating that it actually increases the odds of recidivism.  Further, while most people tend to be released after relatively short sentences, the consequences of incarceration are lasting and damaging.  The fact is we could divert a significant percentage of the American jail population without appreciably increasing risk to public safety.  Alternatives to detention and incarceration will improve the life trajectories of people living in poverty.

BJI looks to reduce the use of jail by providing judges with responsible and cost-effective community-based alternatives.  Staffed by a team of court-based social workers, case managers, and court liaisons that works in collaboration with defense counsel, prosecutors, and judges, BJI serves as an alternative to jail for two distinct populations: people with pending misdemeanor cases who face the possibility of bail they cannot afford; and people who have pled guilty to misdemeanor offenses.  For the first group, BJI offers a pre-trial supervised release program, working to ensure that defendants appear in court through close supervision and also connecting them to voluntary social services, such as job training, educational assistance, drug treatment, mental health counseling, and other needed interventions.  For the people who have pled guilty, BJI offers social and community service alternatives to jail, as well as specialized trauma-informed programming for individuals arrested for prostitution and related charges.  (Trauma-informed intervention is critical to assisting defendants arrested on these charges; they are almost invariably victims, struggling to cope with the enduring horrors of childhood sexual abuse, assault, and exploitation.)

Since its inception one year ago, BJI has diverted 557 individuals from jail, including 21-year-old Rick.  He was arrested and arraigned on a charge of criminal mischief for allegedly damaging a neighbor’s property, a misdemeanor carrying a sentence of up to a year in jail.  Although Rick had a clean criminal record, the prosecutor requested $2,500 bail because he had two other pending criminal cases, including a non-violent felony charge.  Bail had already been set on one of his previous cases—his mother had barely managed to pay it and there was no way they could afford this bail too.  Based on Rick’s verifiable community contacts and his willingness to comply with the conditions of supervision, the judge released him at arraignment to BJI. Rick then readily availed himself of voluntary educational services: he was able to earn a high school equivalency diploma and enroll in a college preparatory course.  Throughout his time in the supervised release program, Rick never missed a required phone call or an in-person meeting with his case manager, and he made it to every court appearance.  After two months, Rick’s criminal case was dismissed and sealed.

Megan, age 17, was charged with assault in the third degree after a physical altercation with a peer, also a misdemeanor.  The prosecutor contacted the victim, who had some personal history with Megan and was open to her receiving an alternative sentence.  The case was adjourned and Megan was ordered to meet with a BJI social worker for a clinical assessment.  Megan described a long history of sexual trauma, ongoing academic difficulties, and many recent struggles as a new mother of a baby boy.  She was also eager to identify personal goals, including graduating from high school, securing employment, and strengthening parenting skills.  On the next court date, the social worker recommended a combination of counseling services, job readiness training, and consultation with an educational liaison.  All parties agreed to a conditional plea of guilty to the charge, with a dismissal of the case upon completion of services.  Although she needed a lot of support and occasional crisis intervention from her social worker, Megan completed all the court-mandated services and her case was ultimately dismissed and sealed.  Megan’s criminal record remained clean, and she went on to pursue her academic and professional goals unconstrained by the collateral consequences of a criminal conviction.

Without BJI, Rick and Meagan probably would have spent considerable time at Rikers Island, New York City’s jail.  A recent report from the Independent Budget Office documents that the City’s annual cost per inmate at Rikers is $168,000 – a significant expenditure at a time of rising public needs and increasing public concern about the overuse of incarceration.  While the institutional costs of incarceration are enormous, the human toll is even greater.  And for people struggling with limited financial resources, time in jail means time away from school, work, family, and other social supports, exacerbating an already formidable constellation of challenges to economic mobility.

Brooklyn Justice Initiatives is still in its infancy.  But in a relatively short period of time, it has already shown that jail diversion is a practical and powerful step toward real system change and turning lives around.   The bottom line: anyone who cares about fighting poverty needs to pay close attention to mass incarceration (and vice versa); and anyone who cares about ending mass incarceration needs to look closely at local jail diversion as a just step in the right direction.

Julian Adler is a project director at the Center for Court Innovation in NYC.  He oversees the Red Hook Community Justice Center and Brooklyn Justice Initiatives.  For more information about the Center and its projects, go to www.courtinnovation.org.