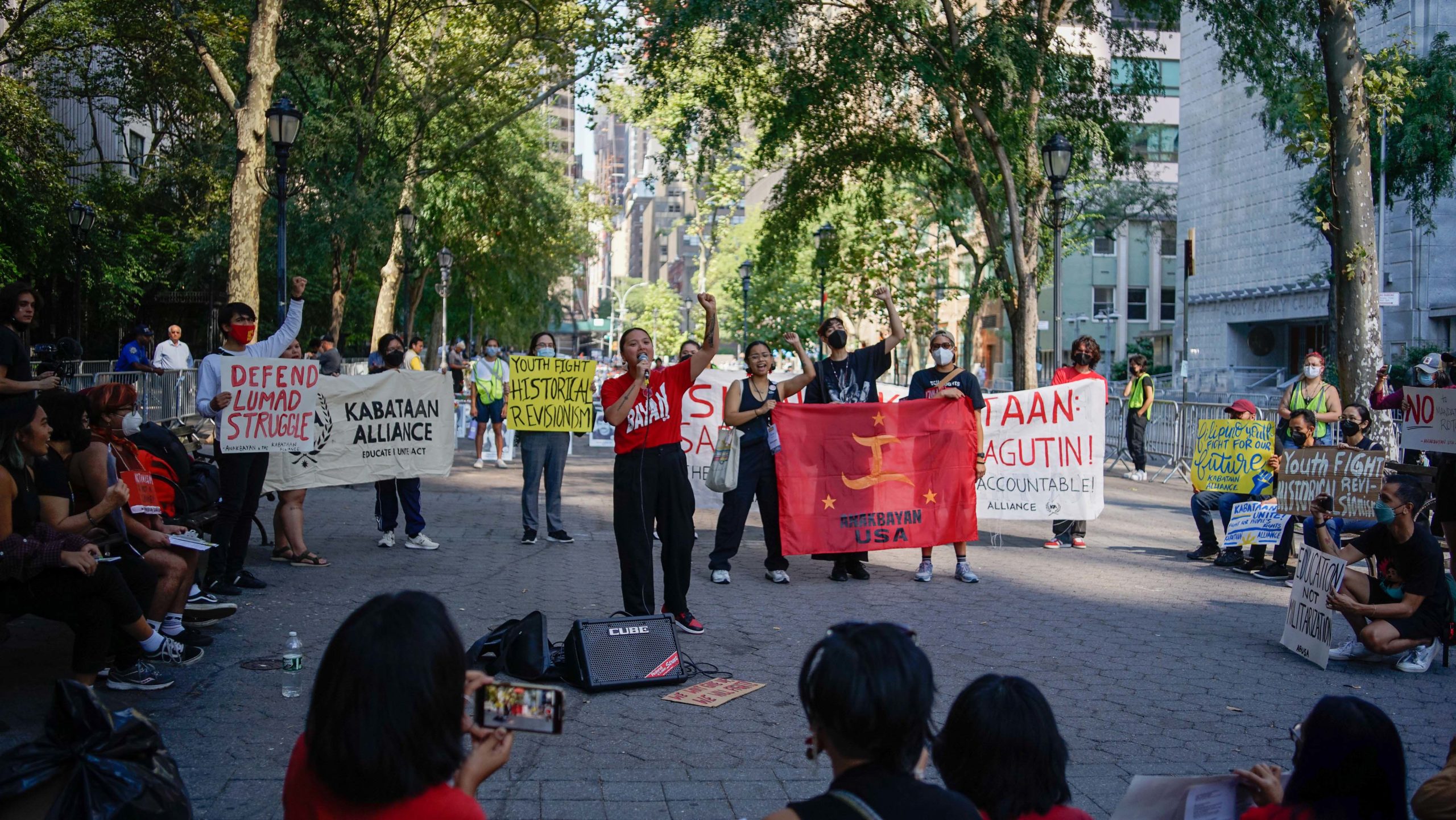 Above Photo: Filipino youth and students chant with their fists up at Dag Hammarskjöld Plaza. Astrid Dong.

US-based Filipino organizations confront the dictatorial leadership of the Philippines, as President Marcos Jr. encourages US investors to exploit his nation.

As Filipino government officials participate in events across New York City over the course of the UN General Assembly, US-based Filipino activists have been determined to raise awareness about dictatorship in the Philippines.

Actions have been organized in New York City by organizations such as Anakbayan, the youth wing of larger US-based progressive Filipino organization Bayan, Kabataan Alliance Northeast, an alliance of Filipino youth and student organizations, and the International League of People’s Struggle (ILPS).

“Is It Terrorism To Want An Education?”

On September 19, over 70 activists attended a protest and rally at the Dag Hammarskjöld Plaza at the UN Headquarters, as the United Nations Transforming Education Summit convened. Vice President and Education Secretary Sara Duterte, who is also the daughter of ultra-right-wing former president Rodrigo Duterte, was originally supposed to represent the Philippines at the summit. At the last minute, she announced that she would not attend.

Yet activists moved forward with the action, calling out Duterte’s role in the Filipino education crisis. Duterte was responsible for permanently closing Indigenous Lumad schools when she was mayor of the city of Davao, ordering schools to return to in-person learning with no vaccine requirement, and advocating for military enlistment for 18-year-olds.

Chrissi Fabro of Kabataan Alliance denounced the Filipino government’s bombings of Indigenous Lumad schools, carried out under the guise of anti-terrorism. “Tell me, is it terrorism to want an education? […] We demand the UN to urge the Philippines government to uphold the rights of the youth, to end militarization, so that the youth and students can thrive.”

Also on September 19, dozens of demonstrators directly confronted newly-elected Filipino President Ferdidand Marcos Jr as he entered and exited the New York Stock Exchange (NYSE) on Wall Street, where he gave a speech to US investors and corporations celebrating how his administration had opened up the Philippines to US markets. He described how his government had allowed for full foreign ownership of companies providing public services in the Philippines. He told investors: “We are proud to share that we recently enacted policies to further liberalize our economy and welcome more foreign investment to our shores.”

Notably, the privatization of public services has not always been consistent with purveyance of better services, especially in the Global South. The entire island of Puerto Rico entered into a blackout on September 18 after the privately-owned LUMA power grid failed even before category 1 (the mildest ranking) Hurricane Fiona made landfall.

Activists outside the event denounced Marcos for “selling out” the Philippines to foreign investors. Organizers claim that this event “only aims to deceive attendees about the success of his economic agenda, which, rather than enriching Filipinos, has caused inflation and food prices to skyrocket to record highs and pushed more households into poverty.”

Marcos’ support for the policy of exporting Filipino labor to other countries was also condemned by activists. The Philippines exports more labor than any other country, and, as of 2018, had about 10% of the population working overseas. Marcos plans to further this policy, despite claims that this policy lets the Filipino government off the hook from providing job security and adequate social services to people, and promotes migrant exploitation.

Anakbayan-USA Chairperson Adrian Bonifacio said: “There are so many people looking for jobs. What Marcos does is just send labor abroad. How many of our families are struggling to make ends meet? Many are struggling to put food on the table.”

Bonifacio added: “Marcos has done nothing but further export labor, going so far as to boast about it within the New York Stock Exchange, claiming that the Philippines can offer ‘high-quality labor’ to international investors. Marcos doesn’t have the priorities of the people in mind.”

As Marcos Jr. left the NYSE, he was hurriedly ushered into his car as he was chased by activists chanting “Marcos, Hitler, diktador, pasista [fascist]!”

Legacy Of Dictatorship And Legacy Of Resistance

These actions were part of the lead up to the 50th anniversary of the declaration of martial law by Ferdinand Marcos Sr. on September 21. Marcos Sr. was the former dictator of the Philippines, and Marcos’ Jr.’s father. Many in the Philippines were shocked and alarmed when another Marcos ascended to the presidency on May 9, 36 years after a popular revolution overthrew Marcos Sr.

On May 10, 2022, survivors and families of the victims of Marcos-era political repression had demonstrated outside the Commission on Elections (COMELEC) office in Manila, alongside hundreds of others. This demonstration had also been organized by Kabataan and Bayan, along with Karapatan, a left-wing human rights alliance,  and Kilusang Mayo Uno, an independent labor center. Many worried and still worry about a return to the era of martial law, in which Marcos Sr. put the nation under military control and carried out heavy repression.

On September 19 at Dag Hammarskjöld Plaza, Nina Macapinlac from Bayan called for the continuation of the anti-dictatorship movement. “It is important to recognize the heroes and martyrs that come before us,” Macapinlac said. “There are 100,000 victims of martial law, but as long as the Philippines continues to be a neo-colony and purposefully underdeveloped, then more Bal Pinguels and Lean Alejandros will rise!” she added, in a reference to previous martyrs of the regime.