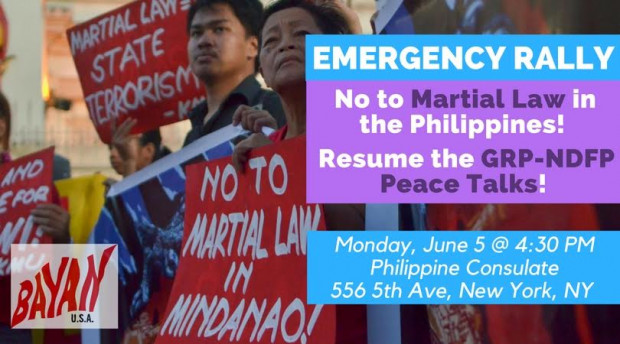 WHAT: Emergency Rally to Condemn Martial Law in the Philippines (FB Event)

Filipinos from around New York and New Jersey are coming together on Monday, June 5th to condemn martial law and increasing U.S. counterinsurgency and intervention in the Philippines. The demonstration demands that martial law be immediately revoked from Mindanao and that the GRP-NDFP peace talks resume.

In the wake of attacks on May 23rd between the Maute group and the Philippine military in Marawi City, the entire southernmost island of Mindanao has been placed under martial law. President Duterte has suspended the writ of habeas corpus, meaning arrests can now happen without a warrant throughout the island. Habeas corpus is vital in protecting the right to liberty and preventing torture, ill-treatment and enforced disappearance.Hundreds of Moro men began being rounded up in Davao City on the day before Ramadan started, and Duterte is threatening to expand martial law to the entire country.

With the most recent reporting of terrorist attacks in Resort World Manila, Filipino community groups call for greater vigilance against increasing U.S. intervention in the region. The U.S. has already pledged its support to “counterterrorism efforts”in the Philippines and will exploit martial law to advance its interests in the country. The Trump administration recently increased the U.S. defense budget by $59 billion, resulting in $639 billion for US-led war and militarization abroad, and especially in Asia.

The Duterte administration, in particular Defense Secretary Delfin Lorenzana, have also used the martial law declaration in the entire island of Mindanao as an excuse to suspend the peace talks between the Government of the Republic of the Philippines and the National Democratic Front of the Philippines. Filipinos are demanding the resumption of the talks, as a viable path to addressing the roots of armed conflict in the Philippines through the negotiation of urgent social and economic reforms aimed at eradicating pervasive poverty and landlessness.

NO TO MARTIAL LAW! OPPOSE GRP ALL OUT WAR!

DEFEND THE HUMAN RIGHTS OF THE PEOPLE!