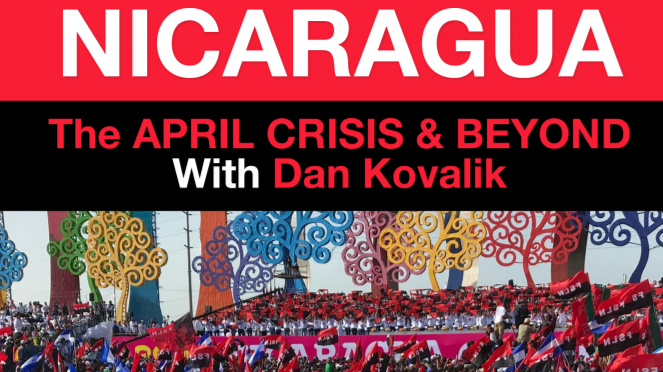 Film: Nicaragua: The April Crisis & Beyond 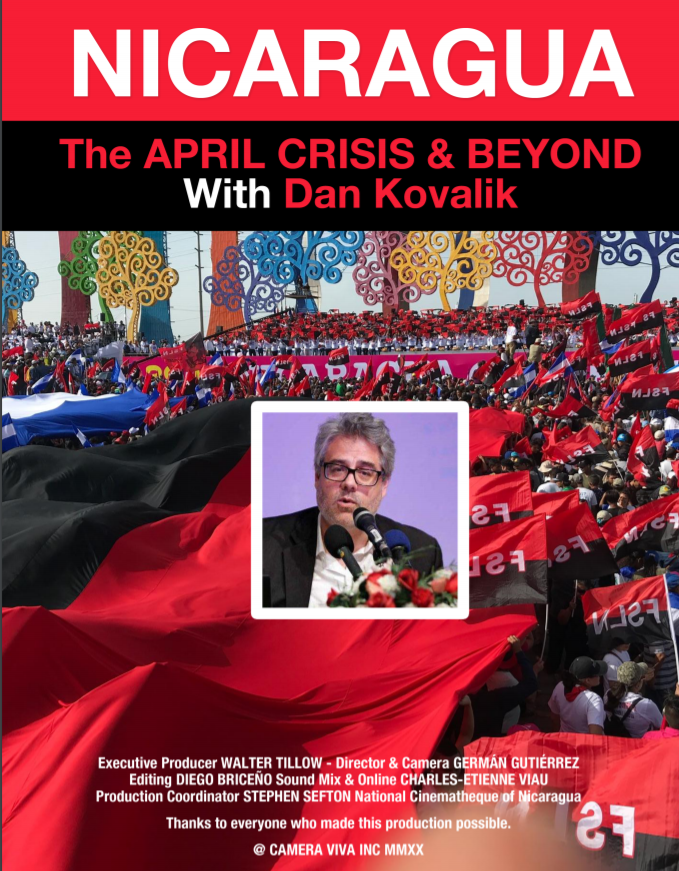 Nicaragua: The April Crisis & Beyond (50 min.) is a documentary film that explores the troubling events of the summer of 2018 in which much of Nicaragua was enveloped in chaos and violence.  The film, which includes interviews with Nicaraguans from Managua, Leon, Grenada and the rural town of Santa Teresa, as well as with ex-pats who moved to Nicaragua to support the revolutionary process there, paints a very different picture than that presented in the mainstream press.

The film shows that the Sandinista government, far from being the villain in the events of 2018, acted in a restrained and cautious way to confront a counter-revolutionary movement, funded from abroad, which attempted to sew violence and chaos to topple the government and destroy the Sandinista Revolution.  The film also shows generally how the Sandinista Revolution, begun in 1979, changed people’s’ lives for the better and how it continues to be a viable and effective force 40 years later.

The film is available in English and Spanish.

In April 2018, the government of Daniel Ortega, the Sandinista President of Nicaragua announces social security reforms which, amongst other things, raise taxes on most citizens. Thousands of unhappy people turned to the streets to protest, sometimes quite violently, confronting state forces. Very soon, local and international media started showing images of deaths, injuries, and destruction. In response, the US administration decides to impose sanctions on Nicaragua.

Daniel Kovalik is an American lawyer and Human Rights advocate who’s followed Nicaragua’s politics for the last four decades. Twenty months after what was called the “April Crisis” he goes to Nicaragua to understand what really happened.

Dan Kovalik “…These are the people that are going to be hurt by the US sanctions against Nicaragua, and sanctions that are being imposed, why? This is the most stable country in Central America with the highest standard of living and all these people want is peace. All they want is to determine their own fate and they deserve that, and we need to oppose the sanctions and oppose the intervention in this country.”

Dan Kovalik is the author of several books published by Skyhorse Publishing, including The Plot to Overthrow Venezuela: How The US is Orchestrating a Coup for Oil, and No More War: How the West uses ‘Humanitarian’ Intervention to Advance its Economic and Strategic Interests.

Here is what some are saying about his books:

“A treasure trove of information that Americans should know, but scarcely do.” – Noam Chomsky

Dan Kovalik can be reached at dkovalik@outlook.com or through CAMERA VIVA INC MMXX at cameraviva@gmail.com