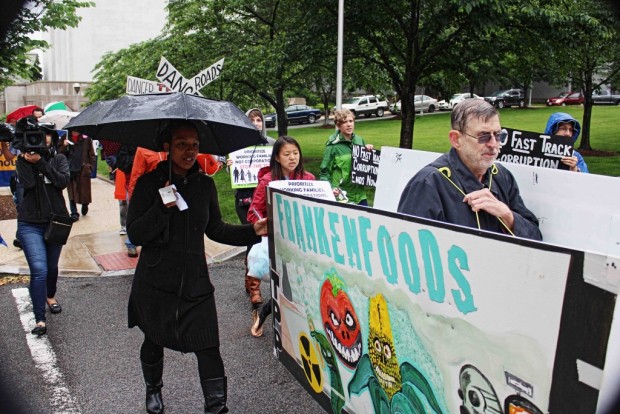 Above photo: By Eleanor Goldfield. Click here for more photos.

On Thursday, despite the cold and rain in Washington D.C., people took to the streets to protest Fast Track for rigged corporate trade deals like the nearly complete Trans Pacific Partnership (TPP) and the Transatlantic Trade and Investment Partnership (TTIP).

The protest at the US House of Representatives began with a march around the House Office Buildings on Capitol Hill highlighting a shift to the final phase of the conflict over Fast Track for rigged corporate trade deals.  Right now everyone agrees that opponents of Fast Track have the majority in the US House of Representatives but an ‘Obama Onslaught,’ supported by lobbyists for transnational corporations is expected. The movement against rigged corporate trade is going to have to escalate its campaign if we are going to hold the majority and stop fast track for the TPP and other rigged corporate trade agreements.

People opposed to Fast Track for rigged trade chanted for democracy and played bucket drums capturing the attention of House members and staff who peered out their windows. Kathryn Johnson of Public Citizen spoke about the recent Senate cloture vote which will cut off debate on the Senate floor after only 30 hours. This means that Fast Track will be fast tracked through the senate despite Majority Leader McConnell’s initial promise of an open debate. As a result of his failure to follow through on this promise more than 150 proposed amendments will not be heard.

Many of the participants in the protest came from communities that are directly impacted by fossil fuel and especially fracking infrastructure. From the House Offices they marched to the Department of Energy (DOE), taking over Andependence Avenue, a major throughway in D.C., along the way. They chanted “Stop Fast Track, Stop the Frack Attack NOW!” and “Stop Gas Exports, Stop the TPP!” Hundreds of people stopped to watch the protest take over the street. The secret trade agreements are expected to speed export of oil and gas from the United States.

Protestors were cold and drenched from the rain, but continued to build energy until they arrived at the DOE where there were two final speakers, Maya Van Rossum of Delaware Riverkeeper and Charles Shore from BXE. Both speakers described the environmental catastrophe that is written into the TPP, TTIP, and other rigged corporate deals. TPP will increase fracked gas exports in the United States and thus, increase fracking, pipelines, compressor stations, gas refineries, and other dangerous fossil fuel infrastructure in communities across the country.

It was an important day to highlight the ecological and climate impacts of TPP, especially with Obama’s recent propaganda on environmental protection under the agreement. The leaked environmental chapter shows that there are no true enforcement mechanisms in the TPP.

It should also be recognized that the role of these agreements is fundamentally opposed to environmental protection and human rights. TPP has been negotiated entirely in secret by the world’s largest corporations including the fossil fuel giants.

The deals are set up to maximize corporate profits and facilitate destructive practices like mining, fracking, drilling, logging, river-damming, monoculture agriculture, and more in every country involved. They are not set up to protect our planet, our communities, or our democracy from this military enforced corporate onslaught.

The demonstration took place just before the House members prepared to leave for a recess. Senate majority leader Mitch McConnell is preventing the Senate from adjourning until there are votes on fast track and on the so-called Patriot Act that is set to expire at the end of the month.

Congress returns to DC on June 2nd and the House will likely move towards a vote on the House Floor. Right now, the House does not have enough votes to pass fast track. However, just as happened in the Senate, President Obama and corporate lobbyists will pressure individual members to change their votes. If the movement to stop corporate rigged trade agreements is going to win, it needs to escalate its actions beginning right now during the Memorial Day recess when members are at home and when they return to Washington, DC.

What You Can Do To Stop Rigged Trade

This is a critical time for people to also pressure their members of Congress to oppose fast track. Here are ways to do that:

1. Use www.StopFastTrack.com to call your member and encourage others to do the same.

2. Use the resources at www.FlushtheTPP.org/Tools/ to write letters to the editor, download and pass out literature or write to your member of Congress.

3. Hold rallies outside your member of Congress’ district office or bird dog them at local events.

4. Do a “Drop in and Hang Out” in your member’s district office.

This is the largest coalition ever to oppose rigged corporate trade agreements. It is poised to win an incredible campaign but to do so it must mobilize a tremendous grassroots response to global crony capitalism.