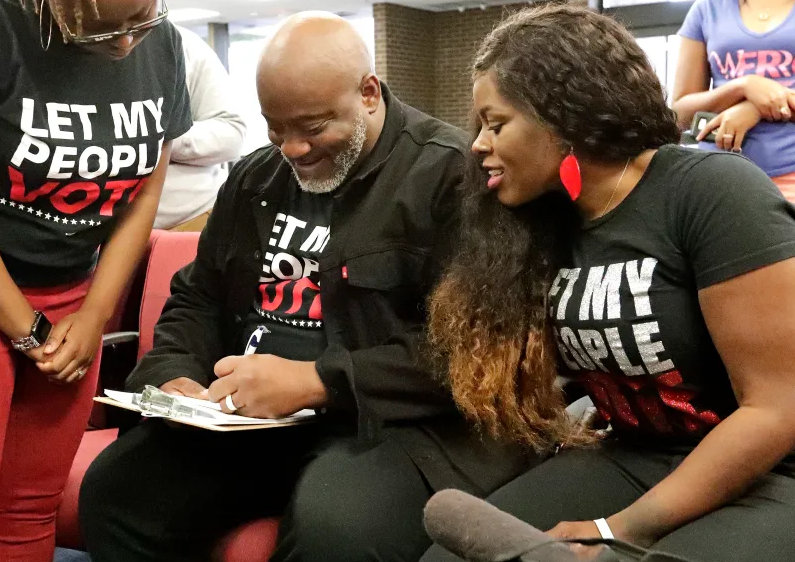 Finally, A Shred Of Good News As Former Felons Register To Vote In Florida

This time next year, as Republicans work overtime to convince their constituents to stick with Donald Trump and Democrats compete in a battle of who can puff the biggest vape cloud on Periscope, one group will finally have their right to vote restored in time for the election in Florida.

As of Tuesday, Florida’s more than 1.4 million former felons with nonviolent convictions became eligible to vote, a result of the state’s passage of Amendment 4 in November. While some residents’ whose voting rights were restored registered online after the measure went into effect at midnight, others celebrated their registrations in person. As the Orlando Sentinel reported, registrants came with U.S. flag, tears, and even confetti.

While incoming Florida Gov. Ron DeSantis, who opposed Amendment 4 during his campaign, said last month that he wanted to delay the measure until the state legislature convenes in March, advocacy groups argued the change should take effect automatically. County election supervisors followed suit, saying they would register people as early as Tuesday, after which the state will confirm someone registering under the measure has completed their parole and probation and paid fines and restitution.

Desmond Meade was among those who registered to vote this morning in Orange County after spending years organizing to allow former felons to vote. He was the first in line at the elections office and told the Sentinel that after 2001 convictions on drug and firearm charges, he began his work for Amendment 4 when he was unable to vote for his wife Sheena Meade when she ran for Florida House District 46 in 2016.

Desmond Meade, who led the years-long effort to return the right to vote to 1.4M former felons in Florida, registered this morning at the Orange County elections office pic.twitter.com/lmyCTuhJeD

Other people registering to vote for the first time since their convictions shared their stories with Florida Times-Union reporter Andrew Pantazi, who tweeted their accounts from the Duval County Supervisor of Elections office:

Corri Moore, 42, was one of the first people downtown to register to vote today. He said he lost his right to vote about 14 years ago for a felony charge of driving with a suspended license. He most regrets not getting to be a part of the historic 2008 election of Barack Obama. pic.twitter.com/OPblgrdcdo

Loutricia Gibbs-Tolbert, who just registered, said: “our victory outweighs our shame. … our lives are salvageable. What you see here are not people who went to prison and prison reformed them, because prison is not rehabilitative.” pic.twitter.com/t5HQEhYOwM

The passage (and unimpeded adoption) of Amendment 4 feels like a rare, sweet victory in the struggle for voting rights. But, as is always the case—particularly in Florida—the war is far from over.