On April 3, 1968 Martin Luther King Jr. gave his last speech, pleading with Black America to shift their wealth into Black owned institutions the night before his assassination. It is by no coincidence that his death came shortly after the world renowned speaker gave this radical advice to the millions who had been following his lead. Imagine where we would have been as a people if we’d gotten into the habit of Black banking in the 60s rather than continuing to allow ourselves to be dependent on institutions that do little to serve our community. The potential for Black banking to disrupt the American exploitation of Blacks was so great that MLK did not make it through the next 24hrs. The weight of his influence continues to be celebrated today, but in celebrating his legacy we can do so much more than just marching and waving banners. Now is the time that we honor and celebrate MLK by banking Black and unleashing its potential to revolutionize our economic power and independence community.

This article has been a long time in the making. Ever since I canceled my first bank account with the mega-bank, Bank of America, in 2012 I had been looking for a Black owned institution to bank with. Bank of America was the first account I had ever opened years ago after getting my first job at McDonalds as a senior in high school. The sole reason why I chose the bank was because was located across the street from my work and I knew that I’d be able to find one no matter where I’d traveled the country. This is the most popular reason why people choose to open an account with a mega-bank, the convenience. Like most Americans I didn’t care where my money went as long as I got what I wanted with as little effort as possible. Convenience is a dangerous trap.

While reading Dr. Frances Cress Welsing’s, The ISIS Papers: The Keys to the Colors, I’d learned about the consequences of banking with Bank of America, “On August 12, the press reported a West German loan of $672 million designed to ‘help bail Poland out of its economic difficulties’. On August 22 a consortium led by the Bank of America granted Poland an additional $325 million. A recent unclassified CIA study reveals the West has lent Poland a total of $21 billion, the bulk of it in the last five years…Why are Western banks relieving the USSR of the expensive burden of propping up the polish economy and regime?” (187) This question also forces me to ask why bail our Poland when there are thousands of people in our community, who invest in this bank, that are in need of a bailout. I saw the direct connection between my funds and exploitation that happens. Many choose to believe that they’re not involved, its the higher level decision makers, but when we make the decision to store our funds with these institutions that is also a decision to support whatever that bank does with those funds. If we don’t like the way that our funds are being used then we have the choice to move those funds, stripping those higher level decision makers of their oppressive and exploitative power. American citizens who choose to store their funds with Bank of America are directly supporting the gross in justices that the bank funds. It took me years to not only find another bank that I could trust, but to find one that was black owned and was also in a local area that I had access to.

During my last visit back home for Detroit for the holiday season I’d mandated myself not to leave the state of Michigan without opening a bank account at a Black owned bank. Shortly after Christmas day I’d visited liberty Bank off of Woodward Ave and was deeply disappointed to find that the bank had been closed down years ago. There was a sign on the front door that referred patrons to the other location closer to downtown Detroit off of 7 mile. On my way to the second location I’d passed by another Black owned bank in Detroit, First Independence Bank on Woodward Ave. that’s been open for over 48 years and has multiple locations throughout the metro Detroit area. It’s pleasing to know that I’m from a state where there are multiple Black banking institutions to choose from, it’s a luxury that I had been ignoring for far too long.

Once I’d made it to Liberty Bank’s 7 mile location in downtown Detroit, I was greeted warmly by the staff there and served quickly. Opening up an account with Liberty Bank was relatively quick and pretty easy. To open up a savings account I only needed two pieces of picture ID and $50. The teller who’d helped me also told me the history behind closed location. Liberty Bank had actually been thriving to the point where they bought a home loan agency that was there. They’d operated that location successfully for almost a decade before things slowed down to the point where they couldn’t maintain the staff team there and had to shut it down. Sadly Liberty Bank wasn’t receiving as much support from the community and as a result had to shut down some of their locations. Today their downtown location is the last Liberty Bank building existing.

With No New Accounts Opening, Black Banks are Closing

While we could always Bank online, there is something very special about having a brick-and-mortar location where patrons can not only do their banking as they speak to someone face-to-face, but it’s also a place where members of the community can be employed. It’s extremely disappointing to see the decreasing number of Black owned Banks over time and especially how little there are left in our country today. Even of the ones that are left these few dozen are are slowly being chipped away at by the simple fact that we won’t simply open up an account.

Why won’t we open up an account? I had one person tell me, “I need to save up more money in order to open up account” but that excuse don’t hold if you only need to have $50 just to simply open up an account. It’s find if you want to add more later but even if you were to let that $50 sit in the black owned bank it would help to keep our banks going. Even if that bank wasn’t your primary bank and you never look at that $50 again until your 100th birthday, at least you could collect some interest and you would have done your part and kept one of our banks in operation longer than it would have had you not open up an account there. To be honest since the two weeks that I’ve opened up my $50 savings account I have not deposited any more funds, but I’m not disappointed. I’m more proud of the fact that I took the initiative to open up the account and while I do plan on making regular deposits it’s not a requirement.

Every Black American (and ally to Black people) in this country should have at least one account with a Black-owned bank. There are so many of us who have so many accounts with multiple different banks and many of us take out loans with all these different financial institutions and constantly complain about the dissatisfactory service and discriminatory rates. We’ve got our money tied up in so many places but disturbingly none of it is in a place that’s owned by us. Black owned banks were made in order to give us financial stability and our refusal to invest in them is complete idiocy. In alignment with the Kwanzaa principal Ujamaa we should illustrate our understanding of cooperative economics by setting community goal that by the end of this year everyone needs to have at least one small bank account with a black-owned bank. Martin Luther King told us this his last speech the night before he was assassinated and we still are not listening. Now is time time, so open up your ears and open up an account with a black-owned bank near you. 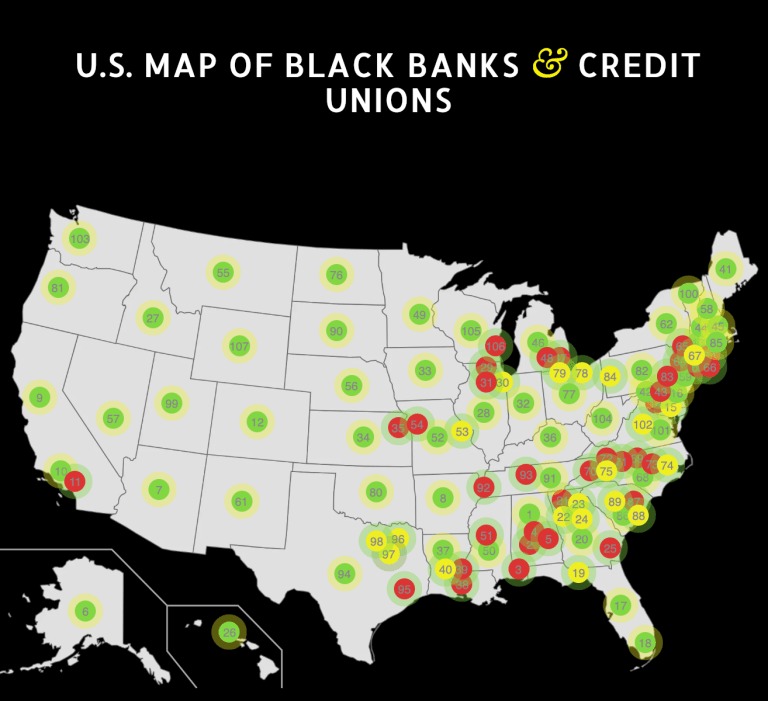 Above I have included a map from the Black Out Coalition that shows all the black-owned banking institutions available in each state in the country. While online banking with a Black owned bank is a great option, I’d urge you to make a trip to the closest physical bank location to you, even if its out of state because there’s nothing like experiencing the banks that we’re losing all across the country. Another cool thing about making a visit when you open up an account, especially with Liberty Bank is banking goodie bag. When I left liberty Bank, they were the only bank I’d ever visited that gave me a bag of goodies for opening up an account I got a few liberty Bank pens, banana clip, measuring tape, keychain and a lanyard. While the goodie bag was a plus there was something uniquely special that I felt at liberty bank, the power that Black banking has to liberate me, my finances and my people so long as we choose to use that power. This year, don’t just buy Black, Bank Black.