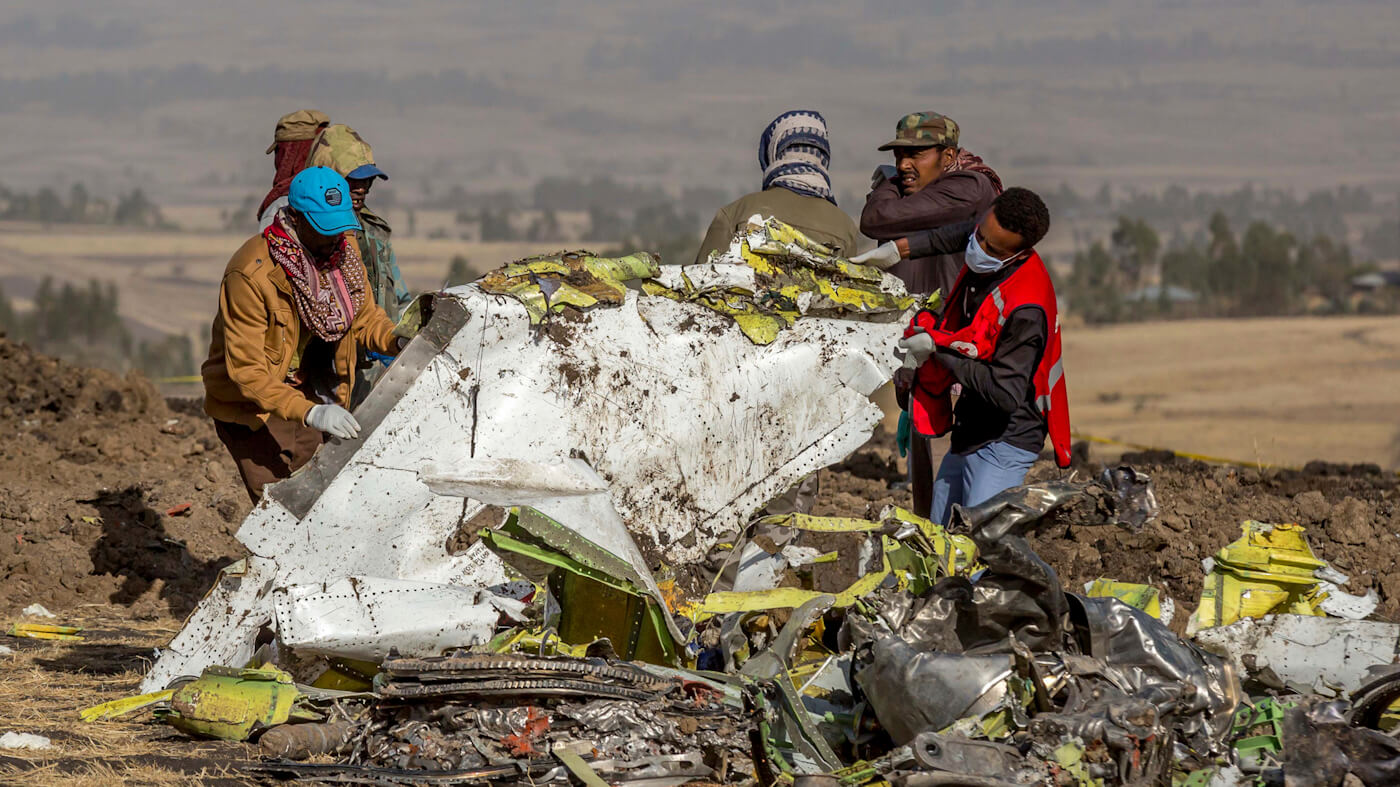 Financial Press: Boeing Should Charge Passengers Extra Not To Crash

Above Photo: Rescuers work at the scene of an Ethiopian Airlines flight crash near Bishoftu, or Debre Zeit, south of Addis Ababa, Ethiopia, March 11, 2019. A spokesman says Ethiopian Airlines has grounded all its Boeing 737 Max 8 aircraft as a safety precaution, following the crash of one of its planes in which 157 people were killed. Mulugeta Ayene | AP

CHICAGO — The Boeing Corporation is again under intense scrutiny, as news broke of a Southwest Airlines 737 Max 8 aircraft travelling, without passengers, from Orlando, FL to Victorville, CA that was forced into an emergency landing after an engine failure.

All 376 of the aerospace giant’s 737 Max 8 aircraft are currently grounded after two crashes — Lion Air Flight 610 in October and Ethiopian Airlines Flight 302 in March — killed all 346 souls on board, leading to a public outcry and an investigation expected to be released imminently.

A contributing cause of the crashes is widely reported to be the lack of sensors and other safety features that Boeing sells as pricey optional upgrades, effectively creating a two-tier safety standard in the aviation industry, where airlines serving less wealthy clientele employ aircraft more prone to crashing.

The Southwest airplane in question was being ferried to a short-term storage location pending the inquiry. The latest news is more unwelcome negative publicity for the Chicago-based manufacturer, whose stock has fallen 16 percent since February.

Public safety as a “burden”

However, those media that pay most attention to stock prices have provided an interesting take on the situation. On Wednesday the Financial Times (FT) published an opinion piece arguing that Boeing is right to charge extra for safety features that the article itself acknowledges are “critical.” For the FT, insisting on a higher safety standard would “inevitably drive sticker prices up” and we should, instead, rely on the market to decide the appropriate levels of safety.

Wanting these “critical” safety features is a “naïve and foolhardy” wish.

It was recently revealed that Boeing charges extra for a second fire extinguisher in the cargo hold, considered essential by Japanese authorities but unnecessary by the U.S. Federal Aviation Administration (FAA). Nevertheless, the FT presents safety features such as the $80,000 anti-stalling sensor system that could have saved the Ethiopian airlines flight and oxygen masks for the crew costing $6,700 as expensive boondoggles that, if enforced as standard, would distort the market and pass the costs on to the consumer.

The argument goes that if customers wished for high safety standards, some airlines could therefore present themselves as such and take advantage of that market. On the other hand, those unconcerned with safety or not wealthy enough could enjoy cheaper tickets on more dangerous vehicles.

This line of reasoning is somewhat undermined by the fact that all the burdensome safety features the FT notes added together amount to less than 0.1 percent of the $121 million price of a new 737 Max 8. However, this sort of cost/benefit analysis of the lives of poorer people is a very common theme in the financial press, and provides an insight into the inherent logic of the system.

For example, two days after the Grenfell Tower tragedy in London, Bloomberg’s Megan McArdle condemned the public anger over the lack of even a basic sprinkler system in the building, arguing that, “safety regulations come at a cost which may exceed the benefit.” She claimed that requiring sprinkler systems would drive up housing prices and therefore be more of a loss than the 71 mostly working-class victims of the fire (many in the U.K. believe the official death toll to be a significant underestimate). McArdle concludes “it is best to leave such calculations of benefit and cost to the market, rather than the government.”

The financial upside of strongmen and fascists

Ignoring the human cost, the financial press applauded the election of the fascist presidential candidate Jair Bolsonaro, in Brazil. Bolsonaro advocated removing environmental regulations protecting the Amazon rainforest from loggers and promised to commit a massacre of his leftist political opponents. “These red outlaws will be banished from our homeland. It will be a cleanup the likes of which has never been seen in Brazilian history,” he proclaimed. Ignoring this, Forbes Magazine happily reported on “Bolsonaro fever” sweeping the nation while the FT noted the financial markets were “cheering” him on. The Wall Street Journal went further, heartily endorsing him as a “credible” “reformer” and an “antidote” to 16 years of leftist rule.

Meanwhile, the financial press strongly supported the rise and rule of Egyptian dictator Abdel el-Sisi, who has imprisoned more than 60,000 political opponents and turned the country into an “open air prison,” according to Amnesty International. Nevertheless, The Economist notes that while el-Sisi had “ruthlessly crushed dissent,” his “firm rule and programme of economic development have also attracted much-needed investment.” Therefore, the president’s assertion that freedoms must be sacrificed in the service of “progress” has been “vindicated,” in the eyes of the business world.