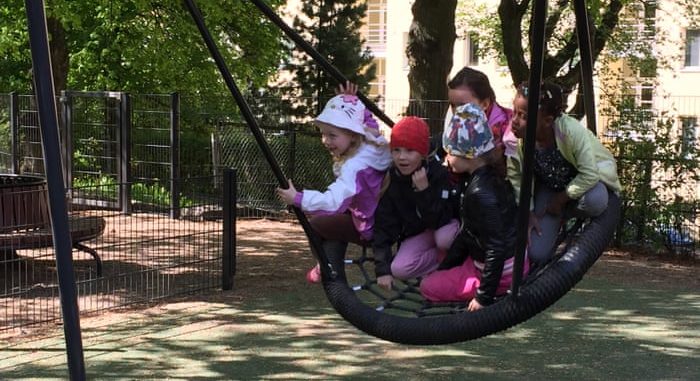 Above photo: Children play in the Franzenia day care centre in Helsinki, Finland. University of Helsinki.

It is public, subsidised and free for families with lower incomes – showing that Britain’s expensive childcare mess is a political choice.

The autumn is a colourful time in Finland. The trees turn yellow and then red before the leaves fall. Neon pinks and yellows also appear—the reflective vests of toddlers and children venturing out to explore parks and cities with their day care teachers.

In Finland these sights are omnipresent. The country’s free or inexpensive public and private day care is, in many suburbs, so extensive that it seems every block might as well have one. This autumn, my eighteen-month-old daughter has started in hers—a city-run public day care quite close to our home.

There, for a part of the day, she will join a group of twelve equally small kids while her parents go to work or study. Among other activities, she plays with friends, goes on nature trips, and visits the library.

Day care is a place for children not only to engage in play, get nutritious meals, and improve their immune systems, but also to prepare for education and for wider society. The children are cared for by skilled caretakers, too—like schoolteachers, early childhood education teachers in Finland have generally been university-educated since 1995.

Of course, the idea of day care for children existed before then—it’s existed for as long as people have opted to care for each other’s children to free the others to do work. The first kindergarten in Finland, intended for children of workers in the working-class suburbs of Helsinki and subsidised by corporations, was established as early as in 1888; four years later, the education for kindergarten teachers began. Finland, then an autonomous part of Russian Empire, was the first Nordic country to introduce it.

Municipalities were permitted to establish day cares in 1919, but at first only a few chose to do so. Only since the post-war period has day care been formalised as a crucial aspect of the welfare state.  The current form of the Finnish day care system dates to 1973, when the government passed the Act on Children’s Day Care, mandating municipalities to offer a day care spot for every child. The so-called ‘subjective right to day care’ has been a cornerstone of the Finnish system ever since.

This right was extended to children between the ages of three and six in 1996, aided by the efforts of cross-party MPs, particularly women. In more recent times, though, the subjective right has come under fire, especially from the Right, as it includes cases in which one parent stays at home—for example, due to unemployment. The fact that parents may stay at home while recovering from mental health issues, for instance, was overlooked.

This criticism led to the subjective right being temporarily ended as a national mandate by a centre-right government in 2018, although many municipalities chose to keep it; the current centre-left government has since restored it, though, taking the multiplicity of situations in which parents may stay home into account.

At present, then, every Finnish parent, if they so wish, may put their under-school-age children into day care; the municipalities are required to find a place for every one of them. This is not always an easy task, especially considering the importance of keeping day care spots close at home—not every suburb is as well-served as ours. In practice, queue systems are often used for the most popular locations.

In the 1970s, the main function of day care was freeing parents, chiefly women, to become a part of the labour force. However, in later decades, the pedagogical function of day care has moved to the fore, with day care often considered as a crucial step for preparing children for school and studies. The last year of day care generally functions as a preschool.

In fact, the preferred term for the whole institution is not ‘day care’, but ‘early childhood education’, and the Act of Early Childhood Education in 2015 codified this pedagogical transformation. This educational element is supported by the government’s commitment to keeping day care well-funded—there is one adult for every four children at Finnish day cares, the lowest ratio of all OECD countries.

Like many other institutions of the welfare state, day cares have had to face the challenge of the Covid epidemic. As a rule, the aim of the state has been to keep children’s activities—day cares and schools—as open and normal as possible, instead aiming restrictions at adults.

Crucially, day care is not the only option provided by the Finnish state to parents. Parents who wish to keep their little ones at home can quite easily do so, bolstered by a home care subsidy—a few hundred euros from the state per month, often with extra municipal subsidies. In the past, this subsidy has sometimes been criticised as a measure which keeps women at home, but many parents see it instead as an extension of free choice, allowing them to find an option that works according to their personal situation.

Many families will end up choosing to utilise day care at some times and to keep the children home at others. Another option is family-based day care, which sees children cared for by a trained worker in their own homes or in someone else’s home, instead of in a day care facility. Whatever choices families make, they can partake in the holistic network of institutions making up the Nordic welfare state.

This welfare state allows for variety in the specifics. Political parties and families debate the best approaches to implementation and use; some, for example, disagree on how young kids should be when they start day care.

Nevertheless, at some point, all parents—no matter their ideology or views on childcare—will have an option available. Conservative, liberal, and socialist parents send their kids to same day cares, confident that they will be cared for and given the opportunity to learn new things. The day care does not intend to replace the family: it complements its efforts and works hand-in-hand with them.

This is proof that the welfare state and society and culture do not work against each other; rather, they work in tandem. Like so many other parts of the welfare state, day care provision is today a cause for all parties, not just those on the left. It has, in a word, become normal.

Like my child, I went to a day care myself in the 1980s. Other day care attendees today will have not only parents but grandparents who also went to day care. All of us have benefitted from this universal day care provision—and so will future generations.